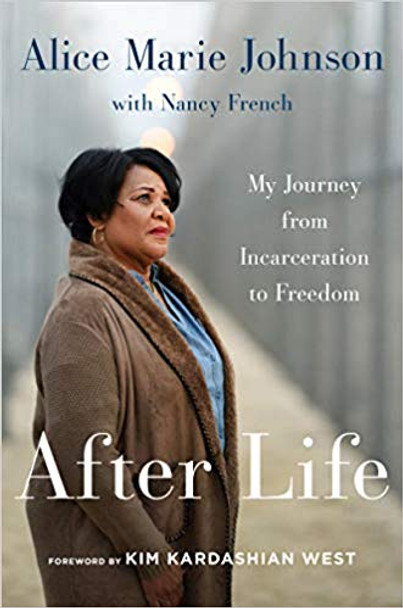 The true-life story of the woman whose life sentence for non-violent drug trafficking was commuted by President Donald Trump thanks to the efforts of Kim Kardashian West—an inspiring memoir of faith, hope, mercy, and gratitude.

How do you hold on to hope after more than twenty years of imprisonment? For Alice Marie Johnson the answer lies with God.

For years, Alice lived a normal life without a criminal record—she was a manager at FedEx, a wife, and a mother. But after an emotionally and financially tumultuous period in her life left her with few options, she turned to crime as a way to pay off her mounting debts. Convicted in 1996 for her nonviolent involvement in a Memphis cocaine trafficking organization, Alice received a life sentence under the mandatory sentencing laws of the time. Locked behind bars, Alice looked to God. Eventually becoming an ordained minister, she relied on her faith to sustain hope over more than two decades—until 2018, when the president commuted her sentence at the behest of Kim Kardashian West, who had taken up Alice’s cause.

In this honest, faith-driven memoir, Alice explains how she held on to hope and gave it to others, from becoming a playwright to mentoring her fellow prisoners. She reveals how Christianity and her unshakeable belief in God helped her persevere and inspired her to share her faith in a video that would go viral—and come to the attention of celebrities who were moved to action.

Today, Alice is an icon for the prison reform movement and a humble servant who embraces gratitude and God for her freedom. In this powerful book, she recalls all of the firsts she has experienced through her activism and provides an authentic portrait of the crisis that is mass incarceration. Linking social justice to spiritual faith, she makes a persuasive and poignant argument for justice that transcends tribal politics. Her story is a beacon in the darkness of despair, reminding us of the power of redemption and the importance of making second chances count.

The book, After Life: My Journey from Incarceration to Freedom [Bulk, Wholesale, Quantity] ISBN# 9780062936103 in Hardcover by Alice Marie Johnson; Kim Kardashian West may be ordered in bulk quantities. Minimum starts at 25 copies. Availability based on publisher status and quantity being ordered.
View AllClose

The Master Plan: My Journey from Life in Prison to a Life of Purpose

MSRP:
Now:
As low as
Was:
The inspiring, instructive, and ultimately triumphant memoir of a man who used hard work and a Master Plan to turn a life sentence into a second chance. Growing up in a tough Washington, D.C.,...

The Master Plan: My Journey from Life in Prison to a Life of Purpose [Paperback]

MSRP:
Now:
As low as
Was:
"The Master Plan is less of a road map and more of a philosophy that we should all take to heart: We are all better than our worst decision, our sense of justice should honor the redemptive...

MSRP:
Now:
As low as
Was:
**A 2019 OWL AWARD LONGLIST WINNER IN THE BIOGRAPHY & MEMOIR CATEGORY**For her whole life Alice Johnson had been an upstanding citizen, but in 1992, after an emotionally and financially...

The Life of Frederick Douglass: A Graphic Narrative of a Slave's Journey from Bondage to Freedom

MSRP:
Now:
As low as
Was:
A graphic novel biography of the escaped slave, abolitionist, public speaker, and most photographed man of the nineteenth century, based on his autobiographical writings and speeches, spotlighting...

A Redemptive Path Forward: From Incarceration to a Life of Activism

MSRP:
Now:
As low as
Was:
As a child of an incarcerated father, Antong Lucky grew up in an impoverished, crime-ridden neighborhood in East Dallas, Texas, born at the same time as East Dallas experienced an alarming rise in...

MSRP:
Now:
As low as
Was:
'Nothing is impossible. The word itself says "I'm possible"!' Audrey Hepburn Faced with a stressful situation? Not a problem. Got a goal to reach? No sweat. Bursting with cheering quotes and...

MSRP:
Now:
As low as
Was:
In the tradition of Shattered and Game Change, Washington Post columnist Jennifer Rubin provides an insider’s look at how women across the political spectrum carried a revolution to the ballot box...

A Year of Living Mindfully: Week-By-Week Mindfulness Meditations for a More Contented and Fulfilled Life

MSRP:
Now:
As low as
Was:
Experience a year of living mindfully with weekly activities and practices, plus workbook pages to fill in, that will help you enjoy a more stress-free, contented, and fulfilled life. “...the perfect...

On the Road with Saint Augustine: A Real-World Spirituality for Restless Hearts

MSRP:
Now:
As low as
Was:
This is not a book about Saint Augustine. In a way, it's a book Augustine has written about each of us. Popular speaker and award-winning author James K. A. Smith has spent time on the road with...

The Creative Thinking Handbook: Your Step-By-Step Guide to Problem Solving in Business

MSRP:
Now:
As low as
Was:
Some people say that creativity is about thinking outside the box, while others believe it is about being creative inside the box; but what if there is no box? More than 82 per cent of companies...

The Legend of the Fairy Stones

MSRP:
Now:
As low as
Was:
The Legend of the Fairy Stones is folkloric fiction, scientific fact, and whimsical artwork blended beautifully in a lyrical verse-driven fairy tale. This unique stand-alone picture book shares the...

MSRP:
Now:
As low as
Was:
From a New York Times bestselling author comes "the riveting pick-me-up we all need right now" (People), that argues that humans thrive in a crisis and that our innate kindness and cooperation have...