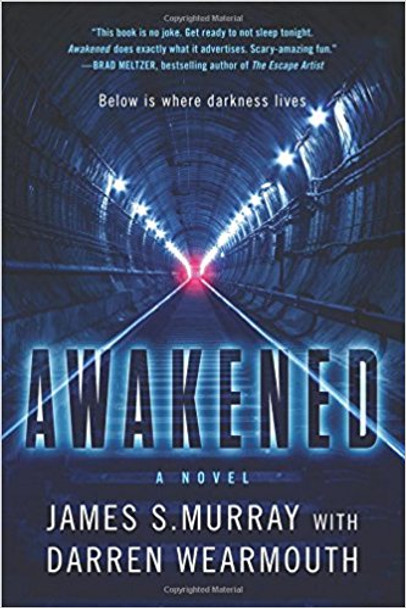 After years of waiting, New York's newest subway line is finally ready, an express train that connects the city with the burgeoning communities across the Hudson River. The shining jewel of this state-of-the-art line is a breathtaking visitors’ pavilion beneath the river. Major dignitaries, including New York City’s Mayor and the President of the United States, are in attendance for the inaugural run, as the first train slowly pulls in.

Under the station’s bright ceiling lights, the shiny silver cars gleam. But as the train comes closer into view, a far different scene becomes visible.

All the train’s cars are empty.

All the cars’ interiors are drenched in blood.

As chaos descends, all those in the pavilion scramble to get out. But the horror is only beginning. High levels of deadly methane fill the tunnels. The structure begins to flood. For those who don’t drown, choke or spark an explosion, another terrifying danger awaits—the thing that killed all those people on the train. It’s out there…and it’s coming.

There's something living beneath New York City, and it's not happy we've woken it up.

The book, Awakened [Bulk, Wholesale, Quantity] ISBN# 9780062687883 in Hardcover by James S. Murray and Darren Wearmouth may be ordered in bulk quantities. Minimum starts at 25 copies. Availability based on publisher status and quantity being ordered.
View AllClose

MSRP:
Now:
As low as
Was:
Winner of the 2017 NAACP Image Award for Outstanding Literary Work—Instructional. Through one incredible woman’s journey from a child bride in a small Zimbabwe village to one of the world’s most...

MSRP:
Now:
As low as
Was:
The definitive book of meditation that will help you achieve new dimensions of stress-free living For the past thirty years, Deepak Chopra has been at the forefront of the meditation revolution in...

The Awakened Family: A Revolution in Parenting

MSRP:
Now:
As low as
Was:
"Parents . . . you will be wowed and awed by [Dr. Shefali]." —Oprah Winfrey New from the New York Times bestselling author of The Conscious Parent comes a radically transformative plan that shows...

King's Cross: The Story of the World in the Life of Jesus [Paperback]

MSRP:
Now:
As low as
Was:
Previously published in hardcover as King's Cross The most influential man to ever walk the earth has had his story told in hundreds of different ways for thousands of years. Can any more be said?...

MSRP:
Now:
As low as
Was:
What if you could eat a vegan, protein-packed meal every day that tasted more like an ice cream sundae than health food? It’s possible: these 100 simple recipes for smoothies bowls, topped with fresh...

MSRP:
Now:
As low as
Was:
This delightful, interactive journey through the history of the world's poetry now includes a removable poster and access to downloadable audio, allowing kids to listen and learn as they experience...

MSRP:
Now:
As low as
Was:
Now a major motion picture, discover the beloved Newbery Medal-winning story of Jess Aarons and Leslie Burke. Join Jess and Leslie as they form an unlikely friendship and create the imaginary land of...

All Quiet on the Western Front [Mass Market Paperback]

MSRP:
Now:
As low as
Was:
Paul Baumer enlisted with his classmates in the German army of World War I. Youthful, enthusiastic, they become soldiers. But despite what they have learned, they break into pieces under the first...

Co-Create: How Your Business will Profit from Innovative and Strategic Collaboration [Hardcover]

MSRP:
Now:
As low as
Was:
The bestselling author of Relationship Economics shows why companies must co-create value with their customers in order to lead the field. In our hyperconnected―and hypercompetitive―economy, it’s not...

Strangers in Their Own Land: Anger and Mourning on the American Right [Hardcover]

MSRP:
Now:
As low as
Was:
In Strangers in Their Own Land, the renowned sociologist Arlie Hochschild embarks on a thought-provoking journey from her liberal hometown of Berkeley, California, deep into Louisiana bayou country—a...