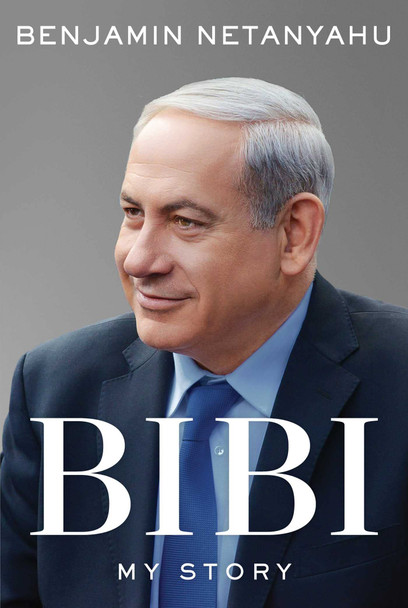 MSRP:
Now: List Price $35.00
Was:
— You save
Hardcover
This product qualifies for FREE US Ground Shipping on orders over $100.

From their earliest days, Bibi and his close-knit brothers, Yoni and Iddo, were instilled with purpose. Born in the wake of the Holocaust at the dawn of Israel’s independence and raised in a family with a prominent Zionist history, they understood that the Jewish state was a hard-won and still precarious gift. All three studied in American high schools—where they learned to appreciate the United States—before returning to their cherished homeland.

The brothers joined an elite special forces outfit of the Israeli Defense Forces known as “the Unit.” At twenty-two, Bibi was wounded while leading his team in the rescue of hostages from a hijacked plane. Four years later, in 1976, Yoni was killed in Entebbe, Uganda, while leading his men in one of the most daring hostage-rescue missions in modern times. Yoni became a legend; Bibi felt he would never recover from his grief. Yet, inspired by Yoni’s legacy and guided by the wisdom of his visionary historian father, Bibi thrust himself into the international struggle against terrorism, ultimately becoming the longest-serving prime minister in Israel’s history.

In this memoir Bibi weaves together his gripping personal story with the dramatic history of Israel and the Jewish people. Through a host of vivid anecdotes, he narrates his own evolution from soldier to statesman, while providing a unique perspective on leadership, the fraught geopolitics of the Middle East, and his successful efforts to liberate Israel’s economy, which helped turn it into a global powerhouse of technological innovation.

Netanyahu gives colorful, detailed, and revealing accounts of his often turbulent relationships and negotiations with Presidents Clinton, Obama, and Trump. With eye-opening candor, he delves into the back channels of high diplomacy—including his struggle against the radical forces that threaten Israel and the world at large, and the decisive events that led to Israel’s groundbreaking 2020 peace agreements with four Arab states.

Offering an unflinching account of a life, a family, and a nation, Netanyahu writes from the heart and embraces controversy head-on. Steely and funny, high-tempo and full of verve, this autobiography will stand as a defining testament to the value of political conviction and personal courage.

The book, Bibi: My Story [Bulk, Wholesale, Quantity] ISBN# 9781668008447 in Hardcover by Benjamin Netanyahu may be ordered in bulk quantities. Minimum starts at 25 copies. Availability based on publisher status and quantity being ordered.
View AllClose

MSRP:
Now:
As low as
Was:
Even those familiar with her name will realize on reading this engrossing account how little they really know of Parks's life and the events that surrounded the dawning Civil Rights movement. Setting...

MSRP:
Now:
As low as
Was:
For the first time, ten years after her abduction from her Salt Lake City bedroom, Elizabeth Smart reveals how she survived and the secret to forging a new life in the wake of a brutal crime On June...

MSRP:
Now:
As low as
Was:
In the New York Times bestseller My Story, for the first time, ten years after her abduction from her Salt Lake City bedroom, Elizabeth Smart reveals how she survived and the secret to forging a new...

MSRP:
Now:
As low as
Was:
The first ever memoir from the most decorated female skier of all time, revealing never-before-told stories of her life in the fast lane, her struggle with depression, and the bold decisions that...

MSRP:
Now:
As low as
Was:
In October 1973, the poet and singer Leonard Cohen—thirty-nine years old, famous, unhappy, and at a creative dead end—traveled from his home on the Greek island of Hydra to the chaos and bloodshed of...

The Tender Bar: A Memoir

MSRP:
Now:
As low as
Was:
Soon to be a major Amazon film directed by George Clooney and starring Ben Affleck, Tye Sheridan, Lily Rabe, and Christopher Lloyd, a raucous, poignant, luminously written memoir about a boy striving...

The Book of Hope: A Survival Guide for Trying Times (Global Icons)

MSRP:
Now:
As low as
Was:
In a world that seems so troubled, how do we hold on to hope? Looking at the headlines―the worsening climate crisis, a global pandemic, loss of biodiversity, political upheaval―it can be hard to...

MSRP:
Now:
As low as
Was:
From the creators of the Academy Award-winning documentary My Octopus Teacher, an immersive journey into the underwater world that inspired it—and holds transformative lessons for us all Craig...

MSRP:
Now:
As low as
Was:
The official tie-in book for the beloved, nine-time Emmy® Award-winning series Schitt's Creek. This beautifully produced, keepsake coffee-table book is the ultimate celebration of the series,...

Elevating the Human Experience: Three Paths to Love and Worth at Work

MSRP:
Now:
As low as
Was:
Have you ever struggled to feel worthy at work? Do you know or lead people who do? When Amelia Dunlop first heard the phrase "elevating the human experience" in a leadership team meeting with her...

MSRP:
Now:
As low as
Was:
Islamic tradition praises Asiyah, Mary, Khadijah, and Fatimah as the four women who showed monumental examples of excellence in faith. While Mary, the mother of Jesus, is the only woman mentioned by...

MSRP:
Now:
As low as
Was:
The modern fantasy classic that Entertainment Weekly named an “All-Time Greatest Novel” and Newsweek hailed as a “Top 100 Book of All Time.” Philip Pullman takes readers to a world where humans have...