Blue: The Color of Noise [Hardcover] 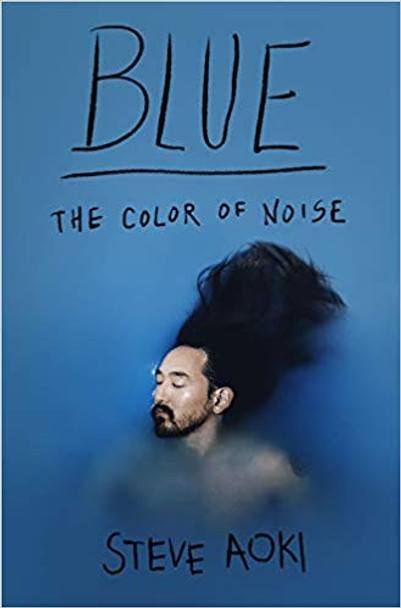 Blue: The Color of Noise [Hardcover]

The music. The mix. His life.

"Sometimes I think my whole life can be seen through shades of blue..." ―Steve Aoki

Blue is the remarkable story―in pictures and words―of Steve Aoki, the superstar DJ/producer who started his career as a vegan straightedge hardcore music kid hellbent on defying his millionaire father, whose unquenchable thirst to entertain―inherited from his dad, Rocky Aoki, founder of Benihana―led him to global success and two Grammy nominations.

Ranked among the top ten DJs in the world today, Grammy-nominated artist, producer, label head, fashion designer, philanthropist and entrepreneur Steve Aoki is an authentic global trendsetter and tastemaker who has been instrumental in defining contemporary youth culture. Known for his outrageous stage antics (cake throwing, champagne spraying, and the ‘Aoki Jump’) and his endearing personality, Steve is also the brains behind indie record label Dim Mak, which broke acts such as The Kills, Bloc Party, and The Gossip. Dim Mak also put out the first releases by breakout EDM stars The Chainsmokers and The Bloody Beetroots, as well as the early releases for Grammy-nominated artist Iggy Azalea, in addition to EDM star Zedd and electro duo MSTRKFT.

In Blue, Aoki recounts the epic highs of music festivals, clubs and pool parties around the world, as well as the lows of friendships lost to drugs and alcohol, and his relationship with his flamboyant father. Illustrated with candid photos gathered throughout his life, the book reveals how Aoki became a force of nature as an early social media adopter, helping to turn dance music into the phenomenon it is today. All this, while remaining true to his DIY punk rock principles, which value spontaneity, fun and friendship above all else―demonstrable by the countless cakes he has flung across cities worldwide.

The book, Blue: The Color of Noise [Bulk, Wholesale, Quantity] ISBN# 9781250111678 in Hardcover by Steve Aoki; Daniel Paisner may be ordered in bulk quantities. Minimum starts at 25 copies. Availability based on publisher status and quantity being ordered.
View AllClose

Island of the Blue Dolphins (Hardcover)

MSRP:
Now: $17.99
Was:
Far off the coast of California looms a harsh rock known as the island of San Nicholas. Dolphins flash in the blue waters around it, sea otter play in the vast kep beds, and sea elephants loll on the...

The Signal and the Noise: Why Most Predictions Fail-But Some Don't [Hardcover]

MSRP:
Now: $27.95
Was:
Nate Silver built an innovative system for predicting baseball performance, predicted the 2008 election within a hair's breadth, and became a national sensation as a blogger-all by the time he was...

Make Some Noise: The Unconventional Road to Dominance [Hardcover]

MSRP:
Now: $28.00
Was:
The former director of communications at Harley-Davidson and one of the most sought-after speakers in the world reveals his exhilarating, innovative approach to creating customer loyalty and...

MSRP:
Now: $15.99
Was:
Celebrate its 50th anniversary with the reissue of this classic. Little Blue and Little Yellow are best friends, but one day they can't find each other. When they finally do, they give each other...

A Color of His Own [Hardcover]

MSRP:
Now: $12.95
Was:
Elephants are gray. Pigs are pink. Only the chameleon has no color of his own. He is purple like the heather, yellow like a lemon, even black and orange striped like a tiger! Then one day a chameleon...

MSRP:
Now: $6.99
Was:
None of Arthur's friends wear glasses and his classmates tease him! But when he stops wearing them, he gets in all kinds of trouble. Maybe four eyes really are better than two. The book, Arthur's...

MSRP:
Now: $16.00
Was:
Paris is a moveable feast," Ernest Hemingway famously wrote, and in this captivating anthology, American writers share their pleasures, obsessions, and quibbles with the great city and its denizens...

The First Time: Finding Myself and Looking for Love on Reality TV

MSRP:
Now: $16.99
Was:
This New York Times bestseller from former football player and star of The Bachelor and The Bachelorette is “full of the kind of juicy details ‘The Bachelor’ franchise enthusiasts yearn for”...

MSRP:
Now: $28.95
Was:
“The best thriller writer alive.” – Ken Follett John Grisham, #1 bestselling author and master of the legal thriller, sweeps you away to paradise for a little sun, sand, mystery, and mayhem. With...

MSRP:
Now: $18.99
Was:
Ronde and Tiki are a team. They are twins, they are each other's best friends and biggest fans, and they play on the same football team, the Cave Spring Vikings. Rondeis #21 and Tiki is #22, always...

MSRP:
Now: $8.99
Was:
In this Newbery Medal-winning novel, Bod is an unusual boy who inhabits an unusual place—he's the only living resident of a graveyard. Raised from infancy by the ghosts, werewolves, and other...

MSRP:
Now: $9.99
Was:
On August 29, 2005, Hurricane Katrina's monstrous winds and surging water overwhelmed the protective levees around low-lying New Orleans, Louisiana. Eighty percent of the city flooded, in some places...

Blueprint: The Evolutionary Origins of a Good Society [Paperback]

MSRP:
Now: $18.99
Was:
For too long, scientists have focused on the dark side of our biological heritage: our capacity for aggression, cruelty, prejudice, and self-interest. But natural selection has given us a suite of...