Democracy in Chains: The Deep History of the Radical Right's Stealth Plan for America [Hardcover] 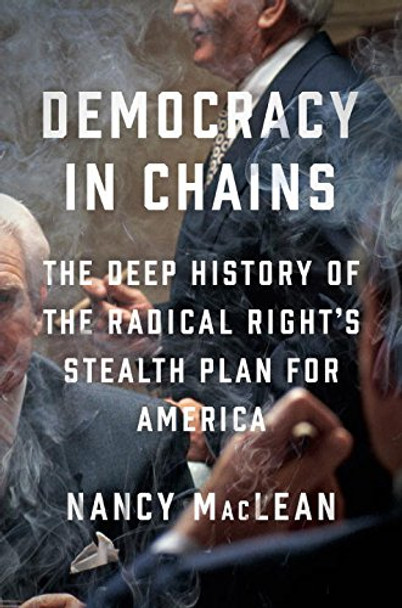 Democracy in Chains: The Deep History of the Radical Right's Stealth Plan for America [Hardcover]

An explosive exposé of the right’s relentless campaign to eliminate unions, suppress voting, privatize public education, and change the Constitution. Behind today’s headlines of billionaires taking over our government is a secretive political establishment with long, deep, and troubling roots. The capitalist radical right has been working not simply to change who rules, but to fundamentally alter the rules of democratic governance. But billionaires did not launch this movement; a white intellectual in the embattled Jim Crow South did. Democracy in Chains names its true architect—the Nobel Prize-winning political economist James McGill Buchanan—and dissects the operation he and his colleagues designed over six decades to alter every branch of government to disempower the majority. In a brilliant and engrossing narrative, Nancy MacLean shows how Buchanan forged his ideas about government in a last gasp attempt to preserve the white elite’s power in the wake of Brown v. Board of Education. In response to the widening of American democracy, he developed a brilliant, if diabolical, plan to undermine the ability of the majority to use its numbers to level the playing field between the rich and powerful and the rest of us. Corporate donors and their right-wing foundations were only too eager to support Buchanan’s work in teaching others how to divide America into “makers” and “takers.” And when a multibillionaire on a messianic mission to rewrite the social contract of the modern world, Charles Koch, discovered Buchanan, he created a vast, relentless, and multi-armed machine to carry out Buchanan’s strategy. Without Buchanan's ideas and Koch's money, the libertarian right would not have succeeded in its stealth takeover of the Republican Party as a delivery mechanism. Now, with Mike Pence as Vice President, the cause has a longtime loyalist in the White House, not to mention a phalanx of Republicans in the House, the Senate, a majority of state governments, and the courts, all carrying out the plan. That plan includes harsher laws to undermine unions, privatizing everything from schools to health care and Social Security, and keeping as many of us as possible from voting. Based on ten years of unique research, Democracy in Chains tells a chilling story of right-wing academics and big money run amok. This revelatory work of scholarship is also a call to arms to protect the achievements of twentieth-century American self-government.

The book, Democracy in Chains: The Deep History of the Radical Right's Stealth Plan for America [Bulk, Wholesale, Quantity] ISBN# 9781101980965 in Hardcover by Nancy MacLean may be ordered in bulk quantities. Minimum starts at 25 copies. Availability based on publisher status and quantity being ordered.
View AllClose

MSRP:
Now:
As low as
Was:
From America's call for a free press to its embrace of the capitalist system,Democracy in America--first published in 1835--enlightens, entertains, and endures as a brilliant study of our national...

Democracy in Chains: The Deep History of the Radical Right's Stealth Plan for America

MSRP:
Now:
As low as
Was:
Behind today’s headlines of billionaires taking over our government is a secretive political establishment with long, deep, and troubling roots. The capitalist radical right has been working not...

Radical: The Science, Culture, and History of Breast Cancer in America

MSRP:
Now:
As low as
Was:
The science, culture and history of breast cancer as told by a reporter who survived it. As a health-care journalist, Kate Pickert knew the emotional highs and lows of medical treatment well -- but...

Un-Trumping America: A Plan to Make America a Democracy Again

MSRP:
Now:
As low as
Was:
From the #1 New York Times bestselling author of Yes We (Still) Can and cohost of Pod Save America, a sharp political playbook for how Democrats can take on Trump, McConnell, Fox News, and the rest...

MSRP:
Now:
As low as
Was:
"RADICAL NATION makes it clear what is at stake. If you want to Save America you must read this—it is MAGA all the way.” — PRESIDENT DONALD J. TRUMP “RADICAL NATION is a must-read. Spicer presents a...

MSRP:
Now:
As low as
Was:
A shocking inside account of reckless capitalism and injustice in the Purdue Pharma bankruptcy case. In September 2019, Purdue Pharma―the maker of OxyContin and a company controlled by the...

MSRP:
Now:
As low as
Was:
**A 2019 OWL AWARD SHORTLIST WINNER IN THE POLITICS & CURRENT EVENTS CATEGORY**A deeply moving work of narrative nonfiction on the tragic shootings at the Mother Emanuel AME church in Charleston,...

The Girl Who Thought in Pictures: The Story of Dr. Temple Grandin ( Amazing Scientists #1 )

MSRP:
Now:
As low as
Was:
When young Temple was diagnosed with autism, no one expected her to talk, let alone become one of the most powerful voices in modern science. Yet, the determined visual thinker did just that. Her...

MSRP:
Now:
As low as
Was:
Jack leans back on Grandfather's shoulder. Aunt Mattie's knitting needles click in the dark. The moon rises. The candle flickers in the gentle prairie wind. I close my eyes to keep everything there...

MSRP:
Now:
As low as
Was:
Leaders like you need the right tools to engage your employees and to build a great workplace culture. That’s why Gallup created the Leadership Power Pack. Read these bestselling books to learn how...

The Iconist: The Art and Science of Standing Out

MSRP:
Now:
As low as
Was:
**2019 OWL AWARD SALES & MARKETING CATEGORY WINNER**Why do we immediately recognize art by Van Gogh and Warhol? What does Beethoven share with Rage Against the Machine and Madonna? What makes us...

The Eyes of Kid Midas

MSRP:
Now:
As low as
Was:
Neal Shustermanis the author of many novels for young adults, includingUnwind, which was an ALA Best Book for Young Adults and a Quick Pick for Reluctant Young Readers,Everlost, andDownsiders, which...

Pitch Anything: An Innovative Method for Presenting, Persuading, and Winning the Deal