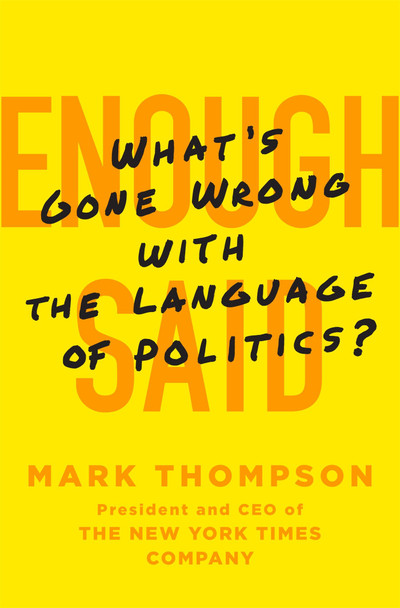 There’s a crisis of trust in politics across the western world. Public anger is rising and faith in conventional political leaders and parties is falling. Anti-politics, and the anti-politicians, have arrived. In Enough Said, President and CEO of The New York Times Company Mark Thompson argues that one of most of significant causes of the crisis is the way our public language has changed. Enough Said tells the story of how we got from the language of FDR and Churchill to that of Donald Trump. It forensically examines the public language we’ve been left with: compressed, immediate, sometimes brilliantly impactful, but robbed of most of its explanatory power. It studies the rhetoric of western leaders from Reagan and Thatcher to Burlesconi, Blair, and today’s political elites on both sides of the Atlantic. And it charts how a changing public language has interacted with real world events – Iraq, the financial crash, immigration – and a mutual breakdown of trust between politicians and journalists, to leave ordinary citizens suspicious, bitter, and increasingly unwilling to believe anybody. Drawing from classical as well as contemporary examples and ranging across politics, business, science, technology, and the arts, Enough Said is a smart and shrewd look at the erosion of language by an author uniquely placed to measure its consequences.

The book, Enough Said: What's Gone Wrong with the Language of Politics? [Bulk, Wholesale, Quantity] ISBN# 9781250059574 in Hardcover by Mark Thompson may be ordered in bulk quantities. Minimum starts at 25 copies. Availability based on publisher status and quantity being ordered.
View AllClose

MSRP:
Now:
As low as
Was:
Poised to capitalize on renewed political interest following the federal election, the trade paperback edition of What’s Happened to Politics? is sure to be necessary reading for every concerned...

MSRP:
Now:
As low as
Was:
Putting tariffs on imported goods or setting other barriers to international trade can be tempting for politicians. They assume that many of their constituents believe that free trade is not fair...

Troubled Water: What's Wrong with What We Drink [Hardcover]

MSRP:
Now:
As low as
Was:
New York Times bestselling author Seth M. Siegel shows how our drinking water got contaminated, what it may be doing to us, and what we must do to make it safe. If you thought America’s drinking...

Troubled Water: What's Wrong with What We Drink [Paperback]

MSRP:
Now:
As low as
Was:
New York Times bestselling author Seth M. Siegel shows how our drinking water got contaminated, what it may be doing to us, and what we must do to make it safe. If you thought America’s drinking...

The Art of Caring Leadership: How Leading with Heart Uplifts Teams and Organizations

MSRP:
Now:
As low as
Was:
If your people know you care about them, they will move mountains. Employee engagement and loyalty expert Heather Younger outlines nine ways to manifest the radical power of caring support in the...

Just Work: How to Root Out Bias, Prejudice, and Bullying to Build a Kick-Ass Culture of Inclusivity

A Ring of Endless Light [Paperback]

MSRP:
Now:
As low as
Was:
After a tumultuous year in New York City, the Austins are spending the summer on the small island where their grandfather lives. He's very sick, and watching his condition deteriorate as the summer...

MSRP:
Now:
As low as
Was:
From the author of The Snowden Files comes an explosive exposé that lays out the Trump administration's ties to Moscow, and Russia's decades-in-the-making political game that upended the 2016...