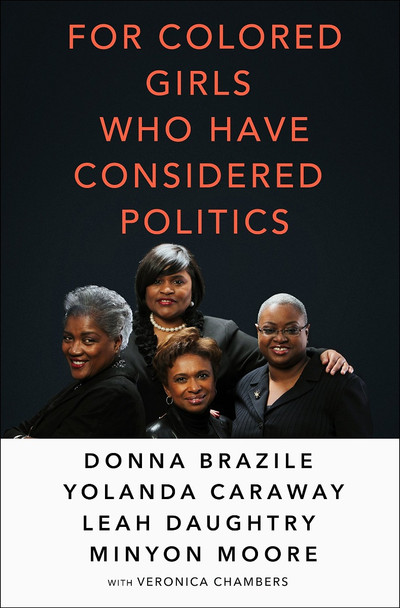 The four most powerful African American women in politics share the story of their friendship and how it has changed politics in America.

The lives of black women in American politics are remarkably absent from the shelves of bookstores and libraries. For Colored Girls Who Have Considered Politics is a sweeping view of American history from the vantage points of four women who have lived and worked behind the scenes in politics for over thirty years―Donna Brazile, Yolanda Caraway, Leah Daughtry, and Minyon Moore―a group of women who call themselves The Colored Girls. Like many people who have spent their careers in public service, they view their lives in four-year waves where presidential campaigns and elections have been common threads. For most of the Colored Girls, their story starts with Jesse Jackson’s first campaign for president. From there, they went on to work on the presidential campaigns of Walter Mondale, Michael Dukakis, Bill Clinton, Al Gore, Barack Obama and Hillary Rodham Clinton.

Over the years, they’ve filled many roles: in the corporate world, on campaigns, in unions, in churches, in their own businesses and in the White House. Through all of this, they’ve worked with those who have shaped our country’s history―US Presidents such as Bill Clinton and Barack Obama, well-known political figures such as Terry McAuliffe and Howard Dean, and legendary activists and historical figures such as Jesse Jackson, Coretta Scott King, and Betty Shabazz.

For Colored Girls Who Have Considered Politics is filled with personal stories that bring to life heroic figures we all know and introduce us to some of those who’ve worked behind the scenes but are still hidden. Whatever their perch, the Colored Girls are always focused on the larger goal of “hurrying history” so that every American ― regardless of race, gender or religious background ― can have a seat at the table. This is their story.

The book, For Colored Girls Who Have Considered Politics [Bulk, Wholesale, Quantity] ISBN# 9781250137715 in Hardcover by Donna Brazile;Yolanda Caraway;Leah Daughtry;Minyon Moore;Veronica Chambers may be ordered in bulk quantities. Minimum starts at 25 copies. Availability based on publisher status and quantity being ordered.
View AllClose

The Girl Who Was Supposed to Die

For Colored Girls Who Have Considered Suicide, When the Rainbow Is Enuf

MSRP:
Now:
As low as
Was:
From its inception in California in 1974 to its highly acclaimed critical success at Joseph Papp's Public Theater and on Broadway, the Obie Award-winningfor colored girls who have considered...

MSRP:
Now:
As low as
Was:
For use in schools and libraries only. Third grader Katie Carew, nicknamed Katie Kazoo by the class bully, had no idea what would happen when she wished she could be anyone but herself. Now her wish...

Petunia, the Girl Who Was Not a Princess

MSRP:
Now:
As low as
Was:
Petunia is NOT a princess. She doesn't want to be fancy or frilly and she certainly doesn't want another little princess moving in next door. But, when the newest neighbor likes pink and climbing...

The Girl Who Speaks Bear

MSRP:
Now:
As low as
Was:
The KJV Outreach Bible gives first-time Bible readers easy access to the story of grace and redemption found in the pages of Scripture. Perfect for sharing with all who are open to hearing the good...

MSRP:
Now:
As low as
Was:
In the series of linked stories at the heart of Filthy Animals, set among young creatives in the American Midwest, a young man treads delicate emotional waters as he navigates a series of sexually...

Framers: Human Advantage in an Age of Technology and Turmoil

MSRP:
Now:
As low as
Was:
The authors of the breakout bestseller Big Data now turn to what more data can't accomplish: the unique ability humans have to frame new questions and so get better results than anyone could have...

We the Possibility: Harnessing Public Entrepreneurship to Solve Our Most Urgent Problems

MSRP:
Now:
As low as
Was:
Can we solve big public problems anymore? Yes, we can. This provocative and inspiring book points the way. The huge challenges we face are daunting indeed: climate change, crumbling infrastructure,...