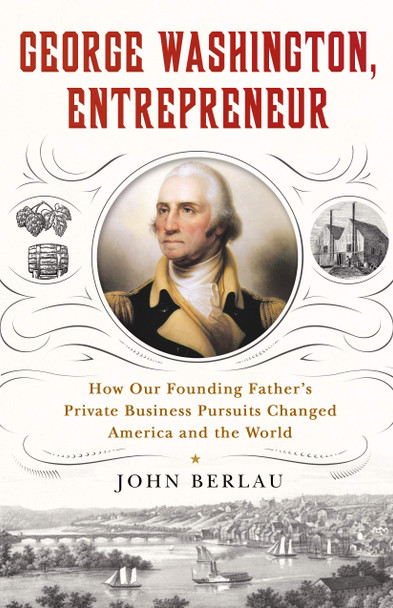 A business biography of George Washington, focusing on his many innovations and inventions.

George Washington: general, statesman...businessman? Most people don't know that Washington was one of the country's first true entrepreneurs, responsible for innovations in several industries. In George Washington, Entrepreneur, John Berlau presents a fresh, surprising take on our forefather's business pursuits.

History has depicted Washington as a gifted general and political pragmatist, not an intellectual heavyweight. But he was a patron of inventors and inveterate tinkerer, and just as intelligent as Jefferson or Franklin. His library was filled with books on agriculture, history, and philosophy. He was the first to breed horses with donkeys to produce the American mule. On his estate, he grew countless varieties of trees and built a greenhouse full of exotic fruits, herbs, and plants. Unlike his Virginia neighbors who remained wedded to tobacco, Washington planted seven types of wheat. His state-of-the-art mill produced flour which he exported to Europe in sacks stamped "G. Washington"―one of the very first branded food products. Mount Vernon was also home to a distillery and became one of the largest American whiskey producers of the era.

Berlau's portrait of Washington, drawn in large part from his journals and extensive correspondence, presents a side of him we haven't seen before. It is sure to delight readers of presidential biography and business history.

The book, George Washington, Entrepreneur: How Our Founding Father's Private Business Pursuits Changed America and the World [Bulk, Wholesale, Quantity] ISBN# 9781250172600 in Hardcover by John Berlau may be ordered in bulk quantities. Minimum starts at 25 copies. Availability based on publisher status and quantity being ordered.
View AllClose

MSRP:
Now:
As low as
Was:
By far the most important figure in the history of the United States, George Washington liberated the thirteen colonies from the superior forces of the British Empire against all military odds, and...

Looptail: How One Company Changed the World by Reinventing Business

MSRP:
Now:
As low as
Was:
Much in the same vein as DELIVERING HAPPINESS, LOOPTAIL combines both Bruce Poon Tip's extraordinary first-person account of his entrepreneurial instincts to start and develop G Adventures, a...

MSRP:
Now:
As low as
Was:
A warm, intimate portrait of Jackie Robinson, America's sports icon, told from the unique perspective of a unique insider: his only daughter. Sharon Robinson shares memories of her famous father in...

MSRP:
Now:
As low as
Was:
Fans of Venezia's highly praised artist biography series will be drawn to this new series that presents the lives of U.S. presidents in an entirely fresh way. With a blend of casual prose, historical...

MSRP:
Now:
As low as
Was:
Revised and Updated Edition! ©2020. Two essential language references integrated into one handy volume. More than 60,000 dictionary entries with hundreds of new words and senses added across a...

Norma Kamali I Am Invincible

MSRP:
Now:
As low as
Was:
Wit and wisdom from the innovative, influential, and empowering wellness guru and designer Norma Kamali In her first book, fashion legend Norma Kamali offers readers a stylish, inspiring, and...

Make It, Don't Fake It: Leading with Authenticity for Real Business Success

MSRP:
Now:
As low as
Was:
Faking it until you make it doesn't work--at least not long enough to build a sustainable business. This book by a CEO and public relations expert combats imposter syndrome and expands on the need...

Work Smart Now: How to Get More Done in Less Time

MSRP:
Now:
As low as
Was:
From one of the top HR specialists in the world comes this much-needed guide to help people maximize productivity and increase revenue. Whether it’s in corporate America or in our own living rooms,...

MSRP:
Now:
As low as
Was:
Winner of the Pulitzer Prize for Drama Winner of the New York Drama Critics Circle Award for Best Play August Wilson has already given the American theater such spell-binding plays about the black...

MSRP:
Now:
As low as
Was:
One day three white mice discover three jars of paint--red, blue, and yellow. Both parents and children alike will appreciate this lighthearted presentation of a lesson in color. “Walsh’s cut-paper...

MSRP:
Now:
As low as
Was:
**A 2020 OWL AWARD SHORTLIST WINNER IN THE PICTURE BOOKS CATEGORY**A #1 New York Times Bestseller!Featured in its own episode in the Netflix original show Bookmarks: Celebrating Black Voices!Featured...