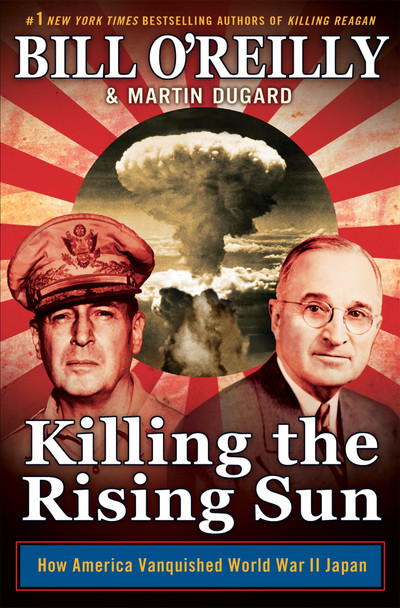 The powerful and riveting new book in the multimillion-selling Killing series by Bill O’Reilly and Martin Dugard Autumn 1944. World War II is nearly over in Europe but is escalating in the Pacific, where American soldiers face an opponent who will go to any length to avoid defeat. The Japanese army follows the samurai code of Bushido, stipulating that surrender is a form of dishonor. Killing the Rising Sun takes readers to the bloody tropical-island battlefields of Peleliu and Iwo Jima and to the embattled Philippines, where General Douglas MacArthur has made a triumphant return and is plotting a full-scale invasion of Japan. Across the globe in Los Alamos, New Mexico, Dr. J. Robert Oppenheimer and his team of scientists are preparing to test the deadliest weapon known to mankind. In Washington, DC, FDR dies in office and Harry Truman ascends to the presidency, only to face the most important political decision in history: whether to use that weapon. And in Tokyo, Emperor Hirohito, who is considered a deity by his subjects, refuses to surrender, despite a massive and mounting death toll. Told in the same page-turning style of Killing Lincoln, Killing Kennedy, Killing Jesus, Killing Patton, and Killing Reagan, this epic saga details the final moments of World War II like never before.

Dear Miss Breed : True Stories of the Japanese American Incarceration During World War II and a Librarian Who Made a Difference

MSRP:
Now:
As low as
Was:
True stories of the Japanese-American incarceration during World War II are told. This book shares the correspondence between Clara Breed, a San Diego librarian, and dozens of Japanese-American...

How Dare the Sun Rise: Memoirs of a War Child

MSRP:
Now:
As low as
Was:
This profoundly moving memoir is the remarkable and inspiring true story of Sandra Uwiringiyimana, a girl from the Democratic Republic of the Congo who tells the tale of how she survived a massacre,...

MSRP:
Now:
As low as
Was:
The latest installment of the multimillion-selling Killing series is a gripping journey through the American West and the historic clashes between Native Americans and settlers. The bloody Battle of...

Enemy Child: The Story of Norman Mineta, a Boy Imprisoned in a Japanese American Internment Camp During World War II

MSRP:
Now:
As low as
Was:
It's 1941 and ten-year-old Norman Mineta is a carefree fourth grader in San Jose, California, who loves baseball, hot dogs, and Cub Scouts. But when Japanese forces attack Pearl Harbor, Norm's world...

MSRP:
Now:
As low as
Was:
History has a way of repeating itself. In the Sunken City that was once Paris, all who oppose the new revolution are being put to the blade. Except for those who disappear from their prison cells, a...

MSRP:
Now:
As low as
Was:
The 169 Libros Carrusel were conceived and created by teachers and teacher trainers. These lighthearted stories are proven to be excellent supplementary reading materials. . The book, Este Juego (...

MSRP:
Now:
As low as
Was:
No one has illustrated animals with as much warmth, humor, and realism as Garth Williams. This classicfull of piglets, kittens, calves, and bunniesis one of his best. Simple, humorous text identifies...

Flat Stanley and the Firehouse

MSRP:
Now:
As low as
Was:
An I Can Read! with a hot topic about Stanley and the Lambchop family, the beloved characters created by Brown. Full colorThe book, Flat Stanley and the Firehouse ISBN 9780061430091 in Paperback by...

MSRP:
Now:
As low as
Was:
70 Must-Know Word Problems Level 2 Welcome to Singapore Maththe leading math program in the world! This book is designed to help students master word problems, which are often tricky and frustrating,...

MSRP:
Now:
As low as
Was:
Get a close-up view of the life of a strawberry. The book, Strawberries (First Step Nonfiction) [Bulk, Wholesale, Quantity] ISBN# 9780761341192 in Paperback by Robin Nelson may be ordered in bulk...