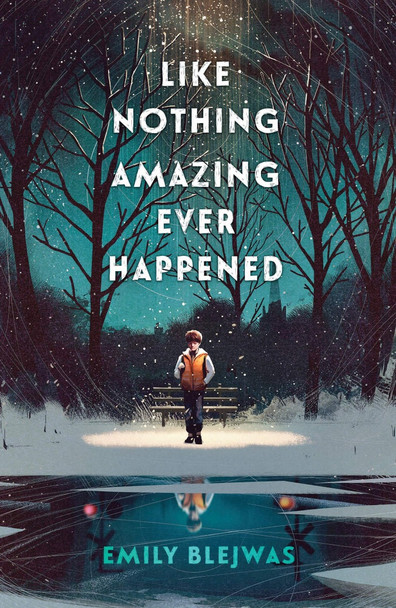 A poignant story of a boy picking up the pieces of his life after the unexpected death of his father, and the loyalty, concern, and friendship he finds in his small-town community.

Justin doesn't know anything these days. Like how to walk down the halls without getting stared at. Or what to say to Jenni. Or how Phuc is already a physics genius in seventh grade. Or why Benny H. wanders around Wicapi talking to old ghosts. He doesn't know why his mom suddenly loves church or if his older brother, Murphy, will ever play baseball again. Or if the North Stars have a shot at the playoffs. Justin doesn't know how people can act like everything's fine when it's so obviously not. And most of all, he doesn't know what really happened the night his dad died on the train tracks. And that sucks.

But life goes on. And as it does, Justin discovers that some things are just unknowable. He learns that time and space and memory are grander and weirder than he ever thought, and that small moments can hold big things, if you're paying attention. Just like his math teacher said, even when you think you have all the information, there will be more. There is always more.

Set during the Gulf War era, Like Nothing Amazing Ever Happened is a story about learning to go on after loss, told with a warmth that could thaw the coldest Minnesota lake.

The book, Like Nothing Amazing Ever Happened [Bulk, Wholesale, Quantity] ISBN# 9781984848482 in Hardcover by Emily Blejwas may be ordered in bulk quantities. Minimum starts at 25 copies. Availability based on publisher status and quantity being ordered.
View AllClose

MSRP:
Now:
As low as
Was:
From the acclaimed author of The Lemonade War comes a new book starring two smart girls determined to liven up their town—one epic prank at a time. Odawahaka has always been too small for Maggie’s...

MSRP:
Now:
As low as
Was:
From the bestselling author of What's the Matter With Kansas, a scathing look at the standard-bearers of liberal politics -- a book that asks: what's the matter with Democrats? It is a widespread...

MSRP:
Now:
As low as
Was:
The author of Girl Against the Universe and Liars, Inc. plunges readers into a world where the internet is always watching—and judging—in this compelling story about mistakes, repercussions, and...

MSRP:
Now:
As low as
Was:
What does it feel like to “see” with your ears like a bat or go through a full body transformation like a frog? Can you wriggle in and out of tight places like an octopus, camouflage yourself like a...

MSRP:
Now:
As low as
Was:
Riley Unlikely is the inspiring story of Riley Banks, who first traveled to Kenya at age 13, and has been back every year since bringing backpacks of school supplies and hygiene kits for young girls,...

MSRP:
Now:
As low as
Was:
Several journal colors and styles are currently sold out. While additional inventory is inbound, we do not expect it to arrive until December. If you are interested in ordering custom journals...

MSRP:
Now:
As low as
Was:
Young readers learn all about animal abodes--from cozy dens to towering trees--in this new Pre-reader from National Geographic Kids. Through text features such as a vocabulary tree and wrap-up...

Loonshots: How to Nurture the Crazy Ideas That Win Wars, Cure Diseases, and Transform Industries [Hardcover]

MSRP:
Now:
As low as
Was:
**A 2019 OWL AWARD SHORTLIST WINNER IN THE BIG IDEA CATEGORY**Longlisted for the 2019 Financial Times and McKinsey Business Book of the Year Award. Washington Post's "10 Leadership Books to Watch for...

The Curious Nature Guide: Explore the Natural Wonders All Around You

MSRP:
Now:
As low as
Was:
With dozens of simple prompts and exercises, best-selling author, naturalist, and artist Clare Walker Leslie invites you to step outside for just a few minutes a day, reignite your sense of wonder...