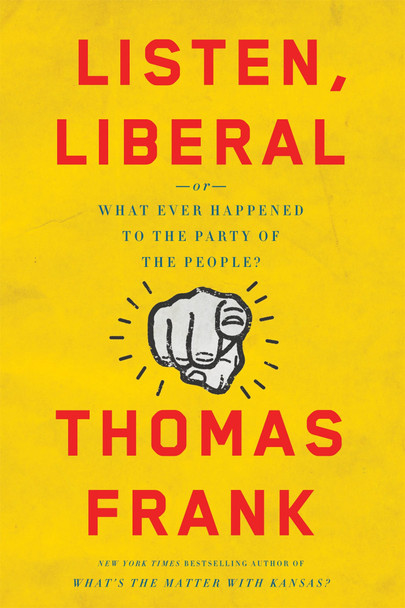 From the bestselling author of What's the Matter With Kansas, a scathing look at the standard-bearers of liberal politics -- a book that asks: what's the matter with Democrats? It is a widespread belief among liberals that if only Democrats can continue to dominate national elections, if only those awful Republicans are beaten into submission, the country will be on the right course. But this is to fundamentally misunderstand the modern Democratic Party. Drawing on years of research and first-hand reporting, Frank points out that the Democrats have done little to advance traditional liberal goals: expanding opportunity, fighting for social justice, and ensuring that workers get a fair deal. Indeed, they have scarcely dented the free-market consensus at all. This is not for lack of opportunity: Democrats have occupied the White House for sixteen of the last twenty-four years, and yet the decline of the middle class has only accelerated. Wall Street gets its bailouts, wages keep falling, and the free-trade deals keep coming. With his trademark sardonic wit and lacerating logic, Frank's Listen, Liberal lays bare the essence of the Democratic Party's philosophy and how it has changed over the years. A form of corporate and cultural elitism has largely eclipsed the party's old working-class commitment, he finds. For certain favored groups, this has meant prosperity. But for the nation as a whole, it is a one-way ticket into the abyss of inequality. In this critical election year, Frank recalls the Democrats to their historic goals-the only way to reverse the ever-deepening rift between the rich and the poor in America.

The book, Listen, Liberal: Or, What Ever Happened to the Party of the People? [Bulk, Wholesale, Quantity] ISBN# 9781627795395 in Hardcover by Thomas Frank may be ordered in bulk quantities. Minimum starts at 25 copies. Availability based on publisher status and quantity being ordered.
View AllClose

MSRP:
Now:
As low as
Was:
A poignant story of a boy picking up the pieces of his life after the unexpected death of his father, and the loyalty, concern, and friendship he finds in his small-town community. Justin doesn't...

MSRP:
Now:
As low as
Was:
Hillary Rodham Clinton is the first woman in US history to become the presidential nominee of a major political party. She served as the 67th Secretary of State—from January 21, 2009, until February...

And Then What Happened, Paul Revere?

MSRP:
Now:
As low as
Was:
Everyone knows about Paul Revere's midnight ride. But not everyone knows the harrowing details and narrow escapes that occurred along the way. This timeless and witty book highlights little-known...

That's Not What Happened

MSRP:
Now:
As low as
Was:
From New York Times bestseller Kody Keplinger comes an astonishing and thought-provoking exploration of the aftermath of tragedy, the power of narrative, and how we remember what we've lost. It's...

What Happened to Bernie Sanders

MSRP:
Now:
As low as
Was:
For the first time, the definitive answer to the relative disappearance of Bernie Sanders and his political revolution in our new Trumpocracy. One year into Donald Trump’s presidency, the US 2016...

MSRP:
Now:
As low as
Was:
A powerful and practical guide to help you navigate racism, challenge privilege, manage stress and trauma, and begin to heal. Healing from racism is a journey that often involves reliving trauma...

Running Remote: Master the Lessons from the World's Most Successful Remote-Work Pioneers

MSRP:
Now:
As low as
Was:
With the unprecedented rise in remote work due to the pandemic, many businesses have struggled with how to effectively transition to a distributed format. Meanwhile, companies who had always been...

MSRP:
Now:
As low as
Was:
The end of summer can be a bittersweet time, and Ollie isn’t sure if she’s ready to go back to school. But the night before her first day back, Ollie dreams about a magical schoolhouse in the woods...

MSRP:
Now:
As low as
Was:
In Jenn Woodall's debut graphic novel series, three teenagers attending school on the moon try to keep their boredom and resentments at bay as they stumble across an exciting secret that could change...

MSRP:
Now:
As low as
Was:
In a classroom of sandwiches, four students stand out with their homemade, culturally-specific lunches. But before they can dig in and enjoy their favorite foods, their lunches are spoiled by...

MSRP:
Now:
As low as
Was:
This edition of The Great Gatsby has been updated by F. Scott Fitzgerald scholar James L.W. West III to include the author’s final revisions and features a note on the composition and text, a...

MSRP:
Now:
As low as
Was:
Designed to boost self-esteem and build confidence, this beautifully illustrated diverse children's book encourages African-American children to take pride in their hair. In this fun rhyming...

It's Not Me, It's You: Break the Blame Cycle. Relationship Better

MSRP:
Now:
As low as
Was:
Two therapists analyze their own relationship to help untangle the common and frustrating barriers many individuals face on the road to a happy, loving, rewarding partnership. Many of the clients...

A Killer by Design: Murderers, Mindhunters, and My Quest to Decipher the Criminal Mind [Paperback]

MSRP:
Now:
As low as
Was:
Lurking beneath the progressive activism and sex positivity in the 1970-80s, a dark undercurrent of violence rippled across the American landscape. With reported cases of sexual assault and homicide...

My Food, Your Food

MSRP:
Now:
As low as
Was:
It's food week in Manuel's class. Each student tells about something special his or her family eats. Manuel learns that families have different food traditions. Some eat noodles with chopsticks...