Made in China: A Prisoner, an SOS Letter, and the Hidden Cost of America's Cheap Goods 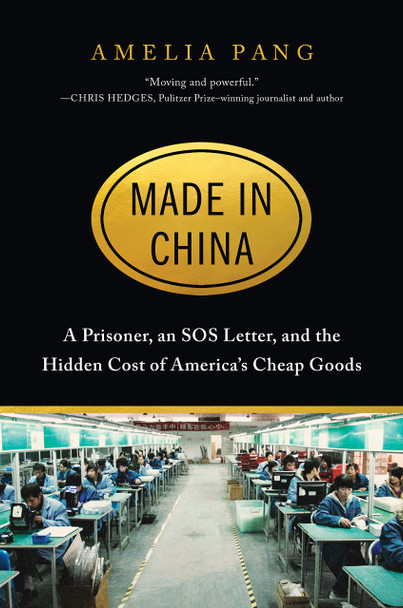 Made in China: A Prisoner, an SOS Letter, and the Hidden Cost of America's Cheap Goods

A Most-Anticipated Book of the Year: Newsweek * Refinery29

Discover the truth behind the discounts

In 2012, an Oregon mother named Julie Keith opened up a package of Halloween decorations. The cheap foam headstones had been five dollars at Kmart, too good a deal to pass up. But when she opened the box, something shocking fell out: an SOS letter, handwritten in broken English.

“Sir: If you occassionally buy this product, please kindly resend this letter to the World Human Right Organization. Thousands people here who are under the persicuton of the Chinese Communist Party Government will thank and remember you forever.”

The note’s author, Sun Yi, was a mild-mannered Chinese engineer turned political prisoner, forced into grueling labor for campaigning for the freedom to join a forbidden meditation movement. He was imprisoned alongside petty criminals, civil rights activists, and tens of thousands of others the Chinese government had decided to “reeducate,” carving foam gravestones and stitching clothing for more than fifteen hours a day.

In Made in China, investigative journalist Amelia Pang pulls back the curtain on Sun’s story and the stories of others like him, including the persecuted Uyghur minority group whose abuse and exploitation is rapidly gathering steam. What she reveals is a closely guarded network of laogai—forced labor camps—that power the rapid pace of American consumerism. Through extensive interviews and firsthand reportage, Pang shows us the true cost of America’s cheap goods and shares what is ultimately a call to action—urging us to ask more questions and demand more answers from the companies we patronize.

The book, Made in China: A Prisoner, an SOS Letter, and the Hidden Cost of America's Cheap Goods [Bulk, Wholesale, Quantity] ISBN# 9781616209179 in Hardcover by Amelia Pang may be ordered in bulk quantities. Minimum starts at 25 copies. Availability based on publisher status and quantity being ordered.
View AllClose

So Long a Letter [Paperback]

MSRP:
Now:
As low as
Was:
Written by award-winning African novelist Mariama Bâ and translated from the original French, So Long a Letter has been recognized as one of Africa’s 100 Best Books of the 20th Century. The brief...

The Sustainable Economy: The Hidden Costs of Climate Change and the Path to a Prosperous Future

MSRP:
Now:
As low as
Was:
An original, engaging guide to creating a sustainable economy that will combat global warming while also improving our quality of life AN ANCHOR ORIGINAL Pick an environmental issue. Maybe air...

MSRP:
Now:
As low as
Was:
The world needs a strong America, and America needs an economic revival after the Coronavirus season of shutdowns. Can the playbook that resulted in the greatest job market in history put Americans...

Flesh and Blood So Cheap: The Triangle Fire and Its Legacy

MSRP:
Now:
As low as
Was:
On March 25, 1911, the Triangle Shirtwaist Factory in New York City burst into flames. The factory was crowded. The doors were locked to ensure workers stay inside. One hundred forty-six...

The Not So Boring Letters of Private Nobody

MSRP:
Now:
As low as
Was:
A trio of seventh graders become one another's first friends as they discover the secrets of a Civil War soldier in this middle grade novel for fans of Gordon Korman and Gary Schmidt. ...

The Lost Family: How DNA Testing Is Upending Who We Are

MSRP:
Now:
As low as
Was:
A deeply reported look at the rise of home genetic testing and the seismic shock it has had on individual lives. You swab your cheek or spit into a vial, then send it away to a lab somewhere. Weeks...

One Day You'll Thank Me: Essays on Dating, Motherhood, and Everything in Between

MSRP:
Now:
As low as
Was:
The fan favorite alumna of the Bravo hit series Southern Charm offers a witty and candid collection of essays on dating, pregnancy, and parenthood. Growing up in South Carolina with a family that...

Mindfulness at Work: Turn Your Job Into a Gateway to Joy, Contentment and Stress-Free Living (Mindful Living)

The Secret Lives of Customers: A Detective Story about Solving the Mystery of Customer Behavior

MSRP:
Now:
As low as
Was:
A "detective story" that delivers key insights for any businessperson asking the questions: who really are our customers, why do we lose them, how do we regain them? Mogul William Goldman's zinger...

How to Be an Inclusive Leader: Your Role in Creating Cultures of Belonging Where Everyone Can Thrive [Paperback]

MSRP:
Now:
As low as
Was:
**A 2019 OWL AWARD SHORTLIST WINNER IN THE MANAGEMENT & CULTURE CATEGORY**We know why diversity is important, but how do we drive real change at work? Diversity and inclusion expert Jennifer...

Futureproof: 9 Rules for Humans in the Age of Automation

MSRP:
Now:
As low as
Was:
“While we need to rewrite the rules of the twenty-first-century economy, Kevin’s book is a great look at how people can do this on a personal level to always put humanity first.”—Andrew Yang “A...