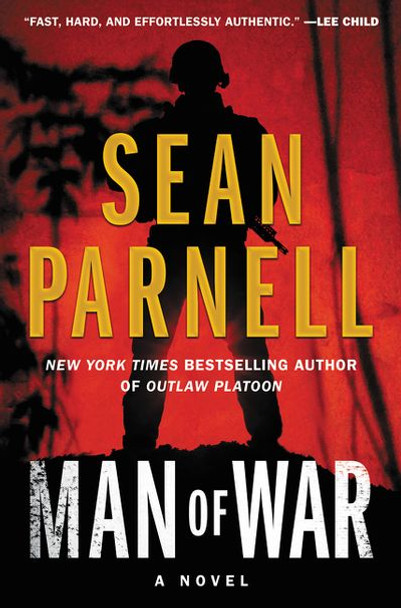 Eric Steele is the best of the best—an Alpha—an elite clandestine operative assigned to a US intelligence unit known simply as the "Program." A superbly trained Special Forces soldier who served several tours fighting radical Islamic militants in Afghanistan, Steele now operates under the radar, using a deadly combination of espionage and brute strength to root out his enemies and neutralize them.

But when a man from Steele’s past attacks a military convoy and steals a nuclear weapon, Steele and his superiors at the White House are blindsided. Moving from Washington, DC, to the Middle East, Europe, and Africa, Steele must use his considerable skills to hunt this rogue agent, a former brother-in-arms who might have been a friend, and find the WMD before it can reach the United States—and the world is forever changed.

The book, Man of War: An Eric Steele Novel [Bulk, Wholesale, Quantity] ISBN# 9780062668783 in Hardcover by Sean Parnell may be ordered in bulk quantities. Minimum starts at 25 copies. Availability based on publisher status and quantity being ordered.
View AllClose

MSRP:
Now: $6.50
Was:
This is the bestselling story of Eric, a boy with leukemia who refused to give up living--as told by the person who was with him through it all, his mother. Eric was seventeen when he heard the...

MSRP:
Now: $17.99
Was:
"Everyone gets mad at hustlers, especially if you're on the victim side of the hustle. And Miles knew hustling was in his veins." Miles Morales is just your average teenager. Dinner every Sunday with...

The Sorrow of War: A Novel of North Vietnam

MSRP:
Now: $16.00
Was:
Bao Ninh, a former North Vietnamese soldier, provides a strikingly honest look at how the Vietnam War forever changed his life, his country, and the people who live there. Originaly published against...

A Boy at War: A Novel of Pearl Harbor

MSRP:
Now: $7.99
Was:
December 7, 1941: A morning like any other, but the events of this day would leave no one untouched. For Adam, living near Honolulu, this Sunday morning is one he has been looking forward to --...

MSRP:
Now: $18.99
Was:
A high-stakes, gripping survival novel from Steve Watkins, set during the Vietnam War. The last place on earth Taylor Sorenson wants to be is in Saigon in the middle of the Vietnam War. His mom...

MSRP:
Now: $14.95
Was:
A New York Times Notable Book of the Year “A remarkable book that could very well change the way we think about poverty in the United States.” — New York Times Book Review “Powerful . . . Presents a...

MSRP:
Now: $26.00
Was:
It all begins with a letter. Fall in love with Penguin Drop Caps, a new series of twenty-six collectible and hardcover editions, each with a type cover showcasing a gorgeously illustrated letter of...

It's Not Supposed to Be This Way: Finding Unexpected Strength When Disappointments Leave You Shattered

MSRP:
Now: $22.99
Was:
**A 2018 OWL AWARD LONGLIST WINNER IN THE RELIGION CATEGORY**Life often looks so very different than we hoped or expected. Some events may simply catch us off guard for a moment, but others shatter...

The Omnivore's Dilemma: A Natural History of Four Meals

MSRP:
Now: $18.00
Was:
Today, buffeted by one food fad after another, America is suffering from what can only be described as a national eating disorder. Will it be fast food tonight, or something organic? Or perhaps...

You're It: Crisis, Change, and How to Lead When It Matters Most

MSRP:
Now: $28.00
Was:
Become a better crisis leader while equipping yourself with the tools for every day transformative leadership. Today, in an instant, leaders can find themselves face-to-face with crisis. An active...

MSRP:
Now: $16.00
Was:
In these ten glittering stories, the award-winning, bestselling author of Swamplandia! takes us to the ghostly and magical swamps of the Florida Everglades. Here wolf-like girls are reformed by nuns,...

You Turn: Get Unstuck, Discover Your Direction, and Design Your Dream Career

MSRP:
Now: $18.95
Was:
If you're thinking about buying this book, it's probably because it feels like something's missing in your career. Guess what? It could be YOU. Whether you're living for the weekends or...

MSRP:
Now: $10.99
Was:
In publication for almost 50 years, The Outsiders has become a standard read for schools thanks to it’s timeless story, poignant characters and purposefully crafted writing. The novel covers...