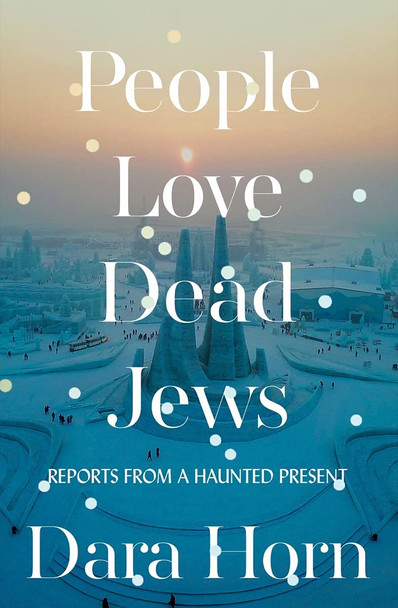 MSRP:
Now: List Price $25.95
Was:
— You save
Hardcover
This product qualifies for FREE US Ground Shipping on orders over $100.

A startling and profound exploration of how Jewish history is exploited to comfort the living.

Renowned and beloved as a prizewinning novelist, Dara Horn has also been publishing penetrating essays since she was a teenager. Often asked by major publications to write on subjects related to Jewish culture―and increasingly in response to a recent wave of deadly antisemitic attacks―Horn was troubled to realize what all of these assignments had in common: she was being asked to write about dead Jews, never about living ones. In these essays, Horn reflects on subjects as far-flung as the international veneration of Anne Frank, the mythology that Jewish family names were changed at Ellis Island, the blockbuster traveling exhibition Auschwitz, the marketing of the Jewish history of Harbin, China, and the little-known life of the "righteous Gentile" Varian Fry. Throughout, she challenges us to confront the reasons why there might be so much fascination with Jewish deaths, and so little respect for Jewish lives unfolding in the present.

Horn draws upon her travels, her research, and also her own family life―trying to explain Shakespeare’s Shylock to a curious ten-year-old, her anger when swastikas are drawn on desks in her children’s school, the profound perspective offered by traditional religious practice and study―to assert the vitality, complexity, and depth of Jewish life against an antisemitism that, far from being disarmed by the mantra of "Never forget," is on the rise. As Horn explores the (not so) shocking attacks on the American Jewish community in recent years, she reveals the subtler dehumanization built into the public piety that surrounds the Jewish past―making the radical argument that the benign reverence we give to past horrors is itself a profound affront to human dignity.

The book, People Love Dead Jews: Reports from a Haunted Present [Bulk, Wholesale, Quantity] ISBN# 9780393531565 in Hardcover by Dara Horn may be ordered in bulk quantities. Minimum starts at 25 copies. Availability based on publisher status and quantity being ordered.
View AllClose

Obsessed: Building a Brand People Love from Day One

MSRP:
Now:
As low as
Was:
The cofounder and chief branding officer of Red Antler, the branding and marketing company for startups and new ventures, explains how hot new millennial brands like Casper, Allbirds, Sweetgreen,...

Rendezvous with Oblivion: Reports from a Sinking Society

MSRP:
Now:
As low as
Was:
From the acclaimed author of Listen, Liberal and What’s the Matter with Kansas, a scathing collection of his incisive commentary on our cruel times―perfect for this political moment What does a...

Your People Shall Be My People: How Israel, the Jews and the Christian Church Will Come Together in the Last Days

MSRP:
Now:
As low as
Was:
Now updated and expanded, this landmark text reveals God's purposes for his covenant people in these times--and how this revelation is impacting the church. Unlike Ruth in the Old Testament, many of...

Notable Native People: 50 Indigenous Leaders, Dreamers, and Changemakers from Past and Present

MSRP:
Now:
As low as
Was:
Renowned and beloved as a prizewinning novelist, Dara Horn has also been publishing penetrating essays since she was a teenager. Often asked by major publications to write on subjects related to...

MSRP:
Now:
As low as
Was:
A pathbreaking work for the next stage of the #MeToo movement, showing how we can address sexual harms with fairness to both victims and the accused, and exposing the sexism that shapes today's...

MSRP:
Now:
As low as
Was:
In this memoir about overcoming adversity in America, the U. S. Senator responsible for creating "opportunity zones" explains how hard work and community growth can drive businesses and end poverty...

Love + Work: How to Find What You Love, Love What You Do, and Do It for the Rest of Your Life [Hardcover]

MSRP:
Now:
As low as
Was:
For the past twenty-five years New York Times bestselling author Marcus Buckingham has been the world's leading researcher into strengths, human performance, and the future of how people work. In...

God Bless This Mess: Learning to Live and Love Through Life's Best (and Worst) Moments

MSRP:
Now:
As low as
Was:
“My life was a complete mess, and God bless all of it. Because it’s in the messes where we learn the most—as long as we slow down enough to realize what God is trying to show us.” Suddenly in the...

MSRP:
Now:
As low as
Was:
Many of us want to pray more, but we feel unsure of what to say. In this inspiring 365-day devotional prayer book, Jesus Listens, Sarah Young, author of the New York Times bestselling Jesus Calling,...