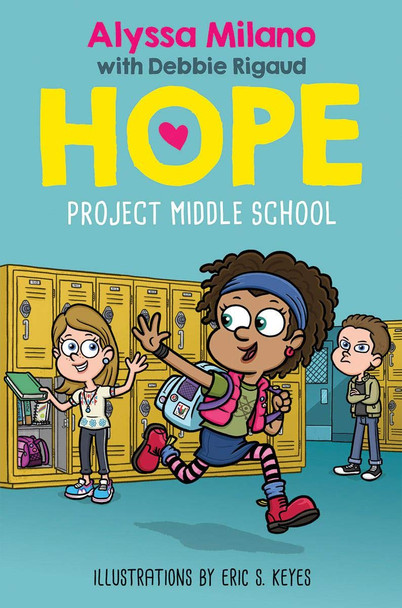 From actor and lifelong activist Alyssa Milano comes Hope Roberts, a girl who's determined to change the world.

Hope is eleven years old, and she wants to be an astrophysicist. She loves swimming, Galaxy Girl comic books, her best friend Sam, and her two rescue dogs.

Hope believes it's always a good day to champion a cause, defend an underdog, and save the future. And most of all, she believes in dreaming big. That's why she's enrolled in all of the advanced classes at her new middle school. She's smart and confident in her abilities. But though Hope seems super strong on the outside, there's another side of her, too. She's just a regular girl trying to survive middle school.

It's the beginning of sixth grade, and Hope's BFF quickly meets a new group of friends in her classes. Hope doesn't know how to handle it. She and Sam have always been inseparable! Things don't go as well for Hope. She embarrasses herself in front of her whole class, and then she gets off on the wrong foot with her new classmate, Camila.

Even science club doesn't go as planned. None of the boys in the club will listen to the girls' ideas, and Hope and Camila get stuck doing the boring part of their science project, even though it was their idea.

But Hope is determined to prove herself to the boys -- even if it means doing a lot of extra work on her own. She knows that sometimes changing the world starts small. So now Hope has a mission! Can she turn the science club into a place that's welcoming for everyone -- and make some new friends along the way?

Hope's relatability, kindness, empathy, and can-do attitude will inspire a generation of do-gooders. This new series is a response to the very palpable feeling that not only can young people save the world -- they will!

MSRP:
Now: $12.99
Was:
In Jason Platt's debut graphic novel, Ferris Bueller meets Calvin and Hobbes in this hilarious and embarrassing middle school caper that asks the important questions--like how long can one kid vamp...

MSRP:
Now: $7.99
Was:
Return to the world of Meg Cabot's bestselling and beloved Princess Diaries series in From the Notebooks of a Middle School Princess―this time through the illustrated diary of a spunky new heroine:...

MSRP:
Now: $49.95
Was:
The first four paper-over-board books of James Patterson's #1 bestselling series are collected for the first time!" Rafe Khatchadorian is the bad boy with a heart of gold," The New York Times said...

MSRP:
Now: $14.99
Was:
The local animal shelter might be closing -- and it's up to Hope Roberts to save it! Meet Hope Roberts. She's eleven years old, and she wants to be an astrophysicist. She loves swimming, Galaxy Girl...

MSRP:
Now: $18.40
Was:
Facing a year of night riders and burnings, Cassie and her family continue their struggle to keep their land and hold onto what rightfully belongs to them, despite the difficult battles they must...

Amusing Ourselves to Death: Public Discourse in the Age of Show Business [Paperback]

MSRP:
Now: $17.00
Was:
Television has conditioned us to tolerate visually entertaining material measured out in spoonfuls of time, to the detriment of rational public discourse and reasoned public affairs. In this...

A Lantern in Her Hand [Paperback]

MSRP:
Now: $6.99
Was:
First published in 1928, "A Lantern in Her Hand" has outlasted literary fashions to touch generations of readers. In this classic story of a pioneer woman, Bess Streeter Aldrich modeled protagonist...

MSRP:
Now: $7.99
Was:
Marcel loves riding his bicycle, whether he's racing through the streets of his small town in France or making bread deliveries for his parents' bakery. He dreams of someday competing in the Tour de...

Diversity, Inc.: The Fight for Racial Equality in the Workplace

MSRP:
Now: $16.99
Was:
One of Time Magazine's Must-Read Books of 2019: An award-winning journalist shows how workplace diversity initiatives have turned into a profoundly misguided industry—and have done little to bring...

MSRP:
Now: $28.00
Was:
The ability to connect with another person and truly be in tune with their physical and emotional state is one of the most elusive interpersonal skills to develop. This book shows you how. In our...