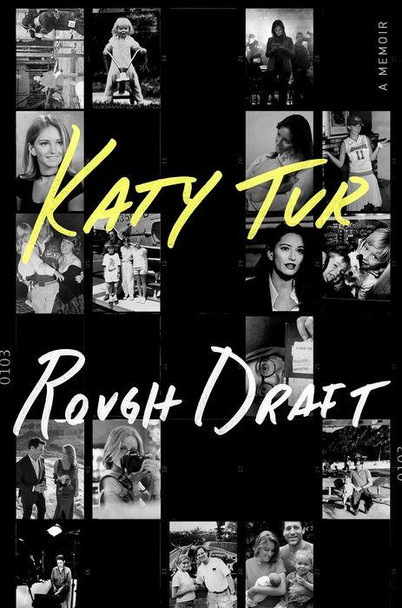 “By the time I was two years old, I knew to yell ‘Story! Story!’ at the squawks of my parents’ police scanner. By four, I could hold a microphone and babble my way through a kiddie news report. By the time I was in high school, though, my parents had lost it all. Their marriage. Their careers. Their reputations.”

When a box from her mother showed up on Katy Tur’s doorstep, months into the pandemic and just as she learned she was pregnant with her second child, she didn’t know what to expect. The box contained thousands of hours of video—the work of her pioneering helicopter journalist parents. They grew rich and famous for their aerial coverage of Madonna and Sean Penn’s secret wedding, the Reginald Denny beating in the 1992 Los Angeles riots, and O.J. Simpson’s notorious run in the white Bronco. To Tur, these family videos were an inheritance of sorts, and a reminder of who she was before her own breakout success as a reporter.

In Rough Draft, Tur writes about her eccentric and volatile California childhood, punctuated by forest fires, earthquakes, and police chases—all seen from a thousand feet in the air. She recounts her complicated relationship with a father who was magnetic, ambitious, and, at times, frightening. And she charts her own survival from local reporter to globe-trotting foreign correspondent, running from her past. Tur also opens up for the first time about her struggles with burnout and impostor syndrome, her stumbles in the anchor chair, and her relationship with CBS Mornings anchor Tony Dokoupil (who quite possibly had a crazier childhood than she did).

Intimate and captivating, Rough Draft explores the gift and curse of family legacy, examines the roles and responsibilities of the news, and asks the question: To what extent do we each get to write our own story?

The book, Rough Draft: A Memoir [Bulk, Wholesale, Quantity] ISBN# 9781982118181 in Hardcover by Katy Tur may be ordered in bulk quantities. Minimum starts at 25 copies. Availability based on publisher status and quantity being ordered.
View AllClose

MSRP:
Now:
As low as
Was:
From Algonquin Indian folklore comes one of the most haunting, powerful versions of the Cinderella tale ever told. In a village by the shores of Lake Ontario lived an invisible being. All the young...

MSRP:
Now:
As low as
Was:
In Unbowed, Nobel Prize winner Wangari Maathai recounts her extraordinary journey from her childhood in rural Kenya to the world stage. When Maathai founded the Green Belt Movement in 1977, she began...

MSRP:
Now:
As low as
Was:
The Rough Guide to the 100 Best Places in the USA is a celebration of the country's most extraordinary places. From iconic favourites like the Grand Canyon to up-and-coming areas such as the...

MSRP:
Now:
As low as
Was:
Rough Guide Polish Phrasebook Compact, clear, and packed with key words and phrases to help conversation, this pocket-sized Polish phrasebook and dictionary from Rough Guides' trusted language...

MSRP:
Now:
As low as
Was:
Explore the fabled past and vibrant present of New York’s literary bar scene Want to know what it’s like to pull up a stool with the likes of Hemingway, Updike, or Capote? Curious how Jay...

MSRP:
Now:
As low as
Was:
An edge-of-your-seat thriller about a group of retired Green Berets who come together to save a former comrade—and 500 other Afghans—being targeted by the Taliban in the chaos of America’s withdrawal...

Piece by Piece: The Story of Nisrin's Hijab (Paperback)

MSRP:
Now:
As low as
Was:
Nisrin is a 13-year-old Bangladeshi-American girl living in Milwaukie, Oregon, in 2002. As she nears the end of eighth grade, she gives a presentation for World Culture Day about Bangladesh while...

Liberalism and Its Discontents

MSRP:
Now:
As low as
Was:
An urgent, incisive examination of the challenges to liberalism, by the bestselling author of The Origins of Political Order. Classical liberalism is in a state of crisis. Developed in the wake of...

MSRP:
Now:
As low as
Was:
An in-depth chronicle of the decades-long rivalry that drove the success of golf's two biggest stars, Tiger Woods and Phil Mickelson. For two decades now there have been two golfers who have...

MSRP:
Now:
As low as
Was:
Standing Tall: Willie Long and the Mare Island Original 21ers is the story of how 25 men stood up, stood tall and filed a complaint against long-entrenched racial discrimination at Mare Island Naval...

Rule Your Day: 6 Keys to Maximizing Your Success and Accelerating Your Dreams

MSRP:
Now:
As low as
Was:
#1 New York Times bestselling author and Lakewood Church pastor Joel Osteen teaches readers to keep their days full of faith, praise, and victory. You would like to savor each moment, grow into...

One Hen: How One Small Loan Made a Big Difference

MSRP:
Now:
As low as
Was:
Inspired by true events, One Hen tells the story of Kojo, a boy from Ghana who turns a small loan into a thriving farm and a livelihood for many. After his father died, Kojo had to quit school to...

MSRP:
Now:
As low as
Was:
The timeless Pulitzer Prize–winning masterpiece following a humble farmer’s journey through 1920s China returns with this beautifully repackaged edition that celebrates its nearly ninety years as an...