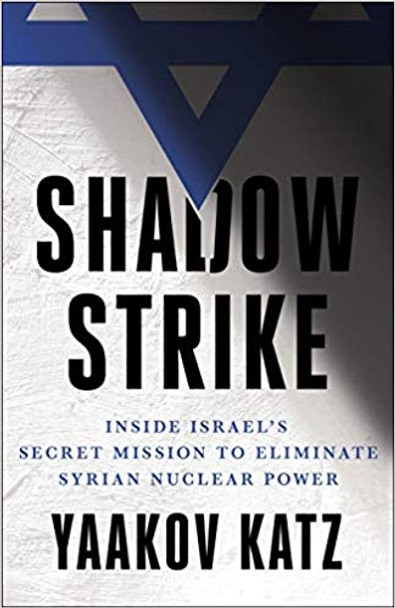 On September 6, 2007, shortly after midnight, Israeli fighters advanced on Deir ez-Zour in Syria. Israel often flew into Syria as a warning to President Bashar al-Assad. But this time, there was no warning and no explanation. This was a covert operation, with one goal: to destroy a nuclear reactor being built by North Korea under a tight veil of secrecy in the Syrian desert.

Shadow Strike tells, for the first time, the story of the espionage, political courage, military might and psychological warfare behind Israel’s daring operation to stop one of the greatest known acts of nuclear proliferation. It also brings Israel’s powerful military and diplomatic alliance with the United States to life, revealing the debates President Bush had with Vice President Cheney and Israeli Prime Minister Ehud Olmert as well as the diplomatic and military planning that took place in the Oval Office, the Prime Minister’s Office in Jerusalem, and inside the IDF’s underground war room beneath Tel Aviv.

These two countries remain united in a battle to prevent nuclear proliferation, to defeat Islamic terror, and to curtail Iran’s attempts to spread its hegemony throughout the Middle East. Shadow Strike explores how this operation continues to impact the world we live in today and if what happened in 2007 is a sign of what Israel will need to do one day to stop Iran's nuclear program. It also asks: had Israel not carried out this mission, what would the Middle East look like today?

The book, Shadow Strike: Inside Israel's Secret Mission to Eliminate Syrian Nuclear Power [Bulk, Wholesale, Quantity] ISBN# 9781250191274 in Hardcover by Yaakov Katz may be ordered in bulk quantities. Minimum starts at 25 copies. Availability based on publisher status and quantity being ordered.
View AllClose

The Shadow War: Inside Russia's and China's Secret Operations to Defeat America

MSRP:
Now:
As low as
Was:
Are we losing a war few of us realize we’re fighting? Poisoned dissidents. Election interference. Armed invasions. International treaties thrown into chaos. Secret military buildups. Hackers and...

MSRP:
Now:
As low as
Was:
NEW YORK TIMES BESTSELLER • The first definitive history of the Mossad, Shin Bet, and the IDF’s targeted killing programs, hailed by The New York Times as “an exceptional work, a humane book about an...

The Bomb: Presidents, Generals, and the Secret History of Nuclear War

MSRP:
Now:
As low as
Was:
From the author the classic The Wizards of Armageddon and Pulitzer Prize finalist comes the definitive history of American policy on nuclear war—and Presidents’ actions in nuclear crises—from Truman...

Spies of No Country: Israel's Secret Agents at the Birth of the Mossad

MSRP:
Now:
As low as
Was:
“Wondrous . . . Compelling . . . Piercing.” —The New York Times Book Review Award-winning writer Matti Friedman’s tale of Israel’s first spies has all the tropes of an espionage novel, including...

Secrets in the Shadows [Paperback]

MSRP:
Now:
As low as
Was:
The essential resource from Martha Stewart, with expert advice and lessons on gardening and making the most of your spectacular blooms Martha Stewart's lifelong love of flowers began at a young age,...

How God Works: The Science Behind the Benefits of Religion

MSRP:
Now:
As low as
Was:
Drawing on a wealth of new evidence, pioneering research psychologist David DeSteno shows why religious practices and rituals are so beneficial to those who follow them—and to anyone, regardless of...