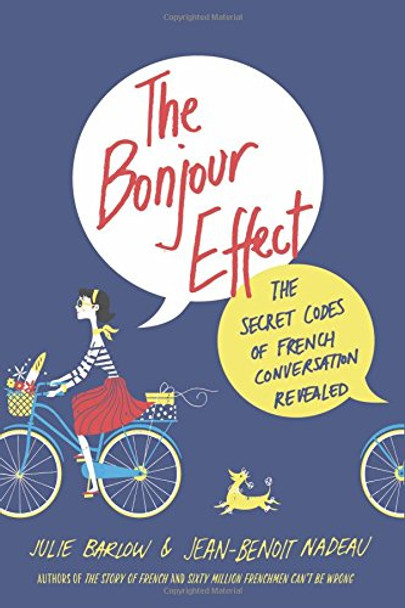 Jean-Benoît Nadeau and Julie Barlow spent a decade traveling back and forth to Paris as well as living there. Yet one important lesson never seemed to sink in: how to communicate comfortably with the French, even when you speak their language. In The Bonjour Effect Jean-Benoît and Julie chronicle the lessons they learned after they returned to France to live, for a year, with their twin daughters. They offer up all the lessons they learned and explain, in a book as fizzy as a bottle of the finest French champagne, the most important aspect of all: the French don't communicate, they converse. To understand and speak French well, one must understand that French conversation runs on a set of rules that go to the heart of French culture. Why do the French like talking about "the decline of France"? Why does broaching a subject like money end all discussion? Why do the French become so aroused debating the merits and qualities of their own language? Through encounters with school principals, city hall civil servants, gas company employees, old friends and business acquaintances, Julie and Jean-Benoît explain why, culturally and historically, conversation with the French is not about communicating or being nice. It's about being interesting. After reading The Bonjour Effect, even readers with a modicum of French language ability will be able to hold their own the next time they step into a bistro on the Left Bank.

The book, The Bonjour Effect: The Secret Codes of French Conversation Revealed [Bulk, Wholesale, Quantity] ISBN# 9781250051851 in Hardcover by Julie Barlow;Jean-Benoit Nadeau may be ordered in bulk quantities. Minimum starts at 25 copies. Availability based on publisher status and quantity being ordered.
View AllClose

The Culture Code: The Secrets of Highly Successful Groups

MSRP:
Now:
As low as
Was:
**A 2018 OWL AWARD WINNER IN THE BUSINESS CATEGORY**From the New York Times bestselling author of The Talent Code comes a book that unlocks the secrets of highly successful groups and provides...

The Obesity Code: Unlocking the Secrets of Weight Loss

MSRP:
Now:
As low as
Was:
Everything you believe about how to lose weight is wrong. Weight gain and obesity are driven by hormones—in everyone—and only by understanding the effects of insulin and insulin resistance can we...

MSRP:
Now:
As low as
Was:
Fragments of a Great Secret have been found in the oral traditions, in literature, in religions and philosophies throughout the centuries. For the first time, all the pieces of The Secret come...

MSRP:
Now:
As low as
Was:
When a struggling young single mother saves the life of an elderly woman, she sets into motion a series of events that will test her strength, loyalty, and determination, all the while setting her on...

MSRP:
Now:
As low as
Was:
Manfred Kets de Vries has written a very generous book. Anyone interested in improving organizational performance through strengthening management teams will find both rich theoretical foundations...

The 80-20 Principle: The Secret to Success by Achieving More with Less [Paperback]

MSRP:
Now:
As low as
Was:
How anyone can be more effective with less effort by learning how to identify and leverage the 80/20 principle--the well-known, unpublicized secret that 80 percent of all our results in business and...

MSRP:
Now:
As low as
Was:
Book 1 of The Redwall Series. A New York Times Bestselling Author. It is the Summer of the Late Rose. A sinister shadow has fallen across the ancient stone abbey of Redwall. For it is rumored that...

How to Be a Positive Leader: Small Actions, Big Impact

MSRP:
Now:
As low as
Was:
Positive leaders are able to dramatically expand their people’s—and their own—capacity for excellence. And they accomplish this without enormous expenditures or huge heroic gestures. Here leading...