The Enemy Above: A Novel of World War II 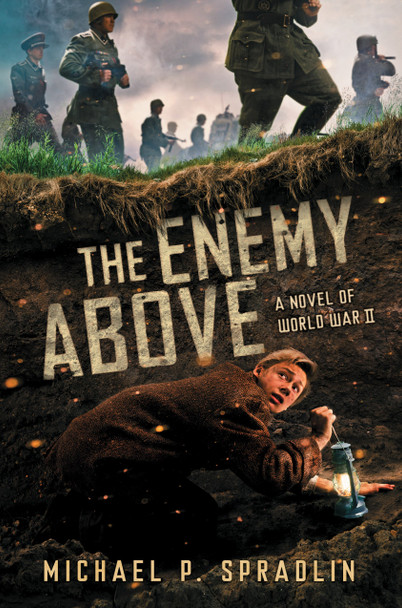 The Enemy Above: A Novel of World War II

In 1942 twelve-year-old Anton, his family, and their small community of Ukrainian Jews are hiding from the advancing Nazis troops, and from the Gestapo, in a web of underground caves, and one officer in particular, Major Karl Von Duesen, is determined to catch or kill every Jew he can find--but as the tide of war turns, a final confrontation between Anton and his enemy is looming.

The book, The Enemy Above: A Novel of World War II [Bulk, Wholesale, Quantity] ISBN# 9780545857826 in Hardcover by Michael P Spradlin may be ordered in bulk quantities. Minimum starts at 25 copies. Availability based on publisher status and quantity being ordered.
View AllClose

MSRP:
Now:
As low as
Was:
The 10th was the only US mountain division to be raised in World War II, and still has a high profile, being involved in operations from Iraq to Somalia and from Haiti to Afghanistan. It did not...

Enemy Child: The Story of Norman Mineta, a Boy Imprisoned in a Japanese American Internment Camp During World War II

MSRP:
Now:
As low as
Was:
It's 1941 and ten-year-old Norman Mineta is a carefree fourth grader in San Jose, California, who loves baseball, hot dogs, and Cub Scouts. But when Japanese forces attack Pearl Harbor, Norm's world...

Code Talker: A Novel About the Navajo Marines of World War Two [Paperback]

MSRP:
Now:
As low as
Was:
Throughout World War II, in the conflict fought against Japan, Navajo code talkers were a crucial part of the U.S. effort, sending messages back and forth in an unbreakable code that used their...

MSRP:
Now:
As low as
Was:
An instant New York Times Bestseller! “Consider this another vaccine against disaster. Fortunately, this dose won't cause a temporary fever—and it happens to be a rippingly good read.”...

So B. It [Paperback]

MSRP:
Now:
As low as
Was:
You couldn′t really tell about Mama′s brain just from looking at her, but it was obvious as soon as she spoke. She had a high voice, like a little girl′s, and she only knew 23 words. I know this for...

The Miracle of a Definite Chief Aim [Hardcover]

MSRP:
Now:
As low as
Was:
What do you want most out of life? If you can answer that question with complete integrity and clarity, you are at the starting point of greatness. In his classic guides Think and Grow Rich and The...

Undeniable: Evolution and the Science of Creation [Hardcover]

MSRP:
Now:
As low as
Was:
"Evolution is one of the most powerful and important ideas ever developed in the history of science. Every question it raises leads to new answers, new discoveries, and new smarter questions. The...

Time Travel with the History Chicks: A Guide to the Women of America's Gilded Age

MSRP:
Now:
As low as
Was:
Time travel with the award-winning podcasters The History Chicks, as they creatively guide readers through America's Gilded Age and the legendary women who lived it. The book, Time Travel with the...

Great at Work: The Hidden Habits of Top Performers

MSRP:
Now:
As low as
Was:
The Wall Street Journal bestseller—a Financial Times Business Book of the Month and named by The Washington Post as “One of the 11 Leadership Books to Read in 2018”—is “a refreshingly data-based,...

Dying for a Paycheck: Why the American Way of Business Is Injurious to People and Companies

MSRP:
Now:
As low as
Was:
In this timely, provocative book, a Stanford business professor contends that many modern management practices are toxic to employees—hurting engagement, increasing turnover, and destroying their...