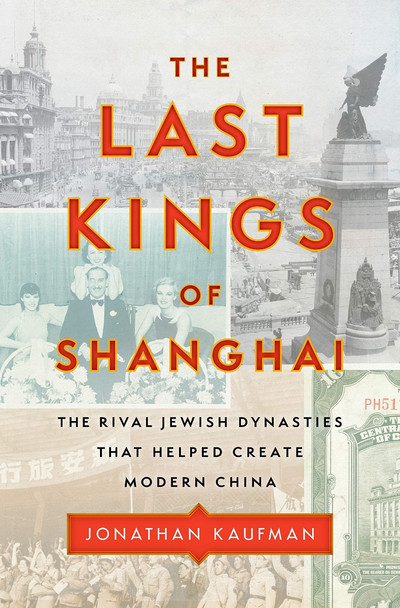 An epic, multigenerational story of two rival dynasties who flourished in Shanghai and Hong Kong as twentieth-century China surged into the modern era, from the Pulitzer Prize-winning journalist

Shanghai, 1936. The Cathay Hotel, located on the city's famous waterfront, is one of the most glamorous in the world. Built by Victor Sassoon--billionaire playboy and scion of the Sassoon dynasty--the hotel hosts a who's who of global celebrities: Noel Coward has written a draft of Private Lives in his suite and Charlie Chaplin has entertained his wife-to-be. And a few miles away, Mao and the nascent Communist Party have been plotting revolution.

By the 1930s, the Sassoons had been doing business in China for a century, rivaled in wealth and influence by only one other dynasty--the Kadoories. These two Jewish families, both originally from Baghdad, stood astride Chinese business and politics for more than 175 years, profiting from the Opium Wars; surviving Japanese occupation; courting Chiang Kai-shek; and losing nearly everything as the Communists swept into power. In The Last Kings of Shanghai, Jonathan Kaufman tells the remarkable history of how these families participated in an economic boom that opened China to the world, but remained blind to the country's deep inequality and to the political turmoil at their doorsteps. In a story stretching from Baghdad to Hong Kong to Shanghai to London, Kaufman enters the lives and minds of these ambitious men and women to forge a tale of opium smuggling, family rivalry, political intrigue, and survival.

The book lays bare the moral compromises of the Kadoories and the Sassoons--and their exceptional foresight, success, and generosity. At the height of World War II, they joined together to rescue and protect eighteen thousand Jewish refugees fleeing Nazism. Though their stay in China started out as a business opportunity, the country became a home they were reluctant to leave, even on the eve of revolution. The lavish buildings they built and the booming businesses they nurtured continue to define Shanghai and Hong Kong to this day. As the United States confronts China's rise, and China grapples with the pressures of breakneck modernization and global power, the long-hidden odysseys of the Sassoons and the Kadoories hold a key to understanding the present moment.

The book, The Last Kings of Shanghai: The Rival Jewish Dynasties That Helped Create Modern China [Bulk, Wholesale, Quantity] ISBN# 9780735224414 in Hardcover by Jonathan Kaufman may be ordered in bulk quantities. Minimum starts at 25 copies. Availability based on publisher status and quantity being ordered.
View AllClose

Love Your Neighbor and Yourself: A Jewish Approach to Modern Personal Ethics

MSRP:
Now:
As low as
Was:
Now in Paperback! A leading ethicist suggests ways to take the moral high road in one's personal life. In this topically relevant book on modern ethical issues, Dorff focuses on personal ethics,...

MSRP:
Now:
As low as
Was:
A lot of professors give talks titled "The Last Lecture." Professors are asked to consider their demise and to ruminate on what matters most to them. And while they speak, audiences can't help but...

MSRP:
Now:
As low as
Was:
New York Times bestselling author Steven Kotler crafts a near-future thriller about the evolution of empathy. Hard to say when the human species fractured exactly. Harder to say when this new talent...

MSRP:
Now:
As low as
Was:
Experience 15 of the West’s finest rustic modern homes in this beautifully written and photographed book. An intimate peek into rustic modern private homes and other properties across the Mountain...

Seasons of Our Joy: A Modern Guide to the Jewish Holidays

All Aboard Trains [Paperback]

MSRP:
Now:
As low as
Was:
Kids will enjoy poring over the exciting pictures and fascinating informationabout different kinds of passenger and freight trainsThe book, All Aboard Trains ISBN 9780448191119 in Paperback by...

MSRP:
Now:
As low as
Was:
All orphan Bolt Wattle has ever wanted was to find his true family. When a mysterious baron in far-off Brugaria sends for Bolt, he wonders if he's getting closer to finding his long-lost parents. But...

MSRP:
Now:
As low as
Was:
Bear is looking for squares, circles, zigzags and more in this fun rhyming text. Young readers learn both shapes and counting as they play hide-and-seek with lovable Bear. This bilingual edition...

MSRP:
Now:
As low as
Was:
On the surface, Riverview High School looks like the post-racial ideal. Serving an enviably affluent, diverse, and liberal district, the school is well-funded, its teachers are well-trained, and many...

Let's Talk about It: Turning Confrontation Into Collaboration at Work

MSRP:
Now:
As low as
Was:
From the bestselling author of Carrots and Sticks Don’t Work―proven communication techniques for turning workplace confrontations into respectful, successful collaborations In the workplace, the...