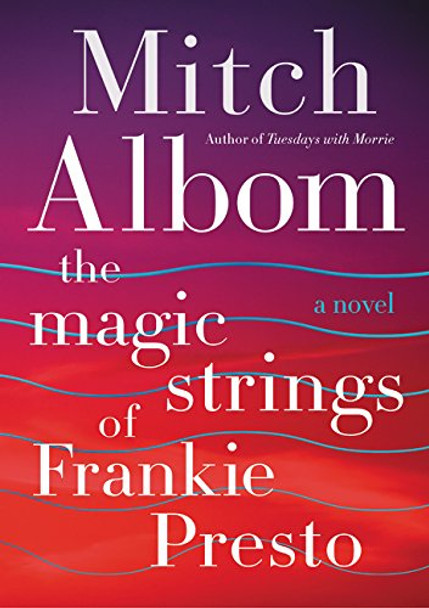 Mitch Albom creates his most unforgettable fictional character—Frankie Presto, the greatest guitarist to ever walk the earth—in this magical novel about the bands we join in life and the power of talent to change our lives. In his most stunning novel yet, the voice of Music narrates the tale of its most beloved disciple, young Frankie Presto, a war orphan raised by a blind music teacher in a small Spanish town. At nine years old, Frankie is sent to America in the bottom of a boat. His only possession is an old guitar and six precious strings. But Frankie’s talent is touched by the gods, and his amazing journey weaves him through the musical landscape of the 20th century, from classical to jazz to rock and roll, with his stunning talent affecting numerous stars along the way, including Hank Williams, Elvis Presley, Carole King, Wynton Marsalis and even KISS. Frankie becomes a pop star himself. He makes records. He is adored. But his gift is also his burden, as he realizes, through his music, he can actually affect people’s futures—with one string turning blue whenever a life is altered. At the height of his popularity, Frankie Presto vanishes. His legend grows. Only decades later, does he reappear—just before his spectacular death—to change one last life. With its Forest Gump-like romp through the music world, The Magic Strings of Frankie Presto is a classic in the making. A lifelong musician himself, Mitch Albom delivers a remarkable novel, infused with the message that “everyone joins a band in this life” and those connections change us all.

The book, The Magic Strings of Frankie Presto [Bulk, Wholesale, Quantity] ISBN# 9780062294418 in Hardcover by Albom, Mitch may be ordered in bulk quantities. Minimum starts at 25 copies. Availability based on publisher status and quantity being ordered.
View AllClose

The Disreputable History of Frankie Landau-Banks

The Magic Strings of Frankie Presto

MSRP:
Now:
As low as
Was:
“Talent is a piece of God’s shadow, and under that shadow, human stories intersect.” A Spanish war orphan born in a burning church and raised by a blind guitar teacher, Frankie Presto was gifted...

Presto!: How I Made Over 100 Pounds Disappear and Other Magical Tales

MSRP:
Now:
As low as
Was:
An unconventional weight loss tale from an unconventional personality—Penn Jillette tells how he lost 100 pounds with his trademark outrageous sense of humor and biting social commentary that makes...

MSRP:
Now:
As low as
Was:
Eleven-year-old Frankie Joe Huckaby, forced to live with the father he never knew, a stepmother, and four stepbrothers in Illinois, starts a delivery service to finance his escape back to his mother...

MSRP:
Now:
As low as
Was:
A violin and a middle-school musical unleash a dark family secret in this moving story by an award-winning author duo. It's 2002. In the aftermath of the twin towers -- and the death of her beloved...

The Witch of Blackbird Pond [Paperback]

MSRP:
Now:
As low as
Was:
Sixteen-year-old Kit Tyler is marked by suspicion and disapproval from the moment she arrives on the unfamiliar shores of colonial Connecticut in 1687. Alone and desperate, she has been forced to...

MSRP:
Now:
As low as
Was:
A fresh and brilliantly told memoir from a cult favorite comic artist, marked by gothic twists, a family funeral home, sexual angst, and great books. This breakout book by Alison Bechdel is a...

Buns and Burgers: Handcrafted Burgers from Top to Bottom

MSRP:
Now:
As low as
Was:
Make masterful burgers, from top to bottom: In this cookbook by Gregory Berger, he teaches readers not only how to create delicious burgers, but also provides recipes for baking buns―the “holy grail...

The Art of Startup Fundraising: Pitching Investors, Negotiating the Deal, and Everything Else Entrepreneurs Need to Know

MSRP:
Now:
As low as
Was:
Startup money is moving online, and this guide shows you how it works. The Art of Startup Fundraising takes a fresh look at raising money for startups, with a focus on the changing face of startup...

MSRP:
Now:
As low as
Was:
Llama, Llama red pajama waiting, waiting for his mama. Mama isn't coming yet. Baby Llama starts to fret. In this infectious rhyming read-aloud, Baby Llama turns bedtime into an all-out...

As Fast as Words Could Fly

MSRP:
Now:
As low as
Was:
Winner of the Teacher's Choices Award, International Literacy Association Young Mason Steele takes pride in turning his father's excited ramblings about the latest civil rights incidents into...

The Curious Incident of the Dog in the Night-Time [Paperback]

MSRP:
Now:
As low as
Was:
Christopher John Francis Boone knows all the countries of the world and their capitals and every prime number up to 7,057. He relates well to animals but has no understanding of human emotions. He...