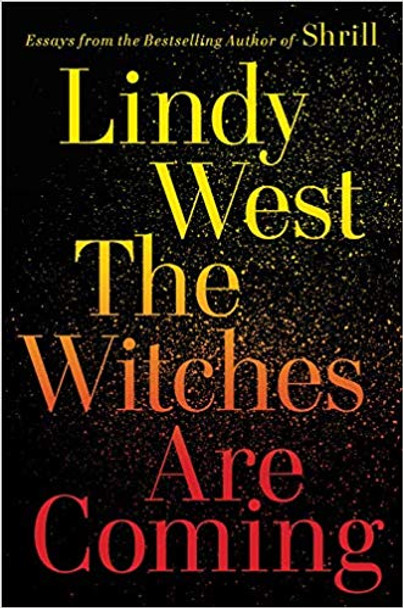 THIS IS A WITCH HUNT. WE'RE WITCHES, AND WE'RE HUNTING YOU.

From the moment powerful men started falling to the #MeToo movement, the lamentations began: this is feminism gone too far, this is injustice, this is a witch hunt. In The Witches Are Coming, firebrand author of the New York Times bestselling memoir and now critically acclaimed Hulu TV series Shrill, Lindy West, turns that refrain on its head. You think this is a witch hunt? Fine. You've got one.

In a laugh-out-loud, incisive cultural critique, West extolls the world-changing magic of truth, urging readers to reckon with dark lies in the heart of the American mythos, and unpacking the complicated, and sometimes tragic, politics of not being a white man in the 21st century. She tracks the misogyny and propaganda hidden (or not so hidden) in the media she and her peers devoured growing up, a buffet of distortions, delusions, prejudice, and outright bullsh*t that has allowed white male mediocrity to maintain a death grip on American culture and politics--and that delivered us to this precarious, disorienting moment in history.

West writes, "We were just a hair's breadth from electing America's first female president to succeed America's first black president. We weren't done, but we were doing it. And then, true to form--like the Balrog's whip catching Gandalf by his little gray bootie, like the husband in a Lifetime movie hissing, 'If I can't have you, no one can'--white American voters shoved an incompetent, racist con-man into the White House."

We cannot understand how we got here--how the land of the free became Trump's America--without examining the chasm between who we are and who we think we are, without fact-checking the stories we tell ourselves about ourselves and each other. The truth can transform us; there is witchcraft in it. Lindy West turns on the light.

The book, The Witches Are Coming [Bulk, Wholesale, Quantity] ISBN# 9780316449885 in Hardcover by Lindy West may be ordered in bulk quantities. Minimum starts at 25 copies. Availability based on publisher status and quantity being ordered.

The Witches: A Set of Plays

MSRP:
Now:
As low as
Was:
Roald Dahl fans will rejoice at the opportunity to bring their favorite books and characters to life. Five of Dahl's hugely popular, beloved books have been adapted into winning plays for children...

MSRP:
Now:
As low as
Was:
Lady Mary is a ward of Lord and Lady Macbeth whose life is forever changed when her father, Lord Cawdor, betrays the Scottish king -- and is hanged as a traitor. In an instant, Mary has lost both her...

MSRP:
Now:
As low as
Was:
From the bestselling author of Charlie and the Chocolate Factory and The BFG! This is not a fairy tale. This is about real witches. Grandmamma loves to tell about witches. Real witches are the most...

MSRP:
Now:
As low as
Was:
From the critically acclaimed author of Allegedly, Tiffany D. Jackson, comes a gripping new novel perfect for fans of E. Lockhart and Gillian Flynn about the mystery of one teenage girl’s...

MSRP:
Now:
As low as
Was:
This Jamaican-inspired fantasy debut about two enemy witches who must enter into a deadly alliance to take down a common enemy has the twisted cat-and-mouse of Killing Eve with the richly imagined...

Becoming Super Woman: A Simple 12-Step Plan to Go from Burnout to Balance

MSRP:
Now:
As low as
Was:
**A 2019 OWL AWARD LONGLIST WINNER IN THE WOMEN IN BUSINESS CATEGORY**Is working like crazy driving you crazy? Do you feel daily pressure to keep pushing yourself even when you’re stressed and...

The Impossible Will Take a Little While: Perseverance and Hope in Troubled Times

MSRP:
Now:
As low as
Was:
More relevant than ever, this seminal collection of essays encourages us to believe in the power of ordinary citizens to change the world In today's turbulent world it's hard not to feel like...

The Lost Family: How DNA Testing Is Upending Who We Are [Paperback]

MSRP:
Now:
As low as
Was:
A deeply reported look at the rise of home genetic testing and the seismic shock it has had on individual lives You swab your cheek or spit into a vial, then send it away to a lab somewhere. Weeks...

That's What She Said: Wise Words from Influential Women

MSRP:
Now:
As low as
Was:
An artist and activist committed to the empowerment of women and girls has created a gorgeous illustrated volume, blending watercolor and short biography to showcase the contributions of more than...

Do Better: Spiritual Activism for Fighting and Healing from White Supremacy

MSRP:
Now:
As low as
Was:
Thought leader, racial justice educator, and sought-after spiritual activist Rachel Ricketts offers mindful and practical steps for all humans to dismantle white supremacy on a personal and...

Don't Label Me: An Incredible Conversation for Divided Times [Hardcover]

MSRP:
Now:
As low as
Was:
**A 2019 OWL AWARD LONGLIST WINNER IN THE POLITICS & CURRENT EVENTS CATEGORY**A unique conversation about diversity, bigotry, and our common humanity, by the New York Times bestselling author,...