Where I Come from: Life Lessons from a Latino Chef 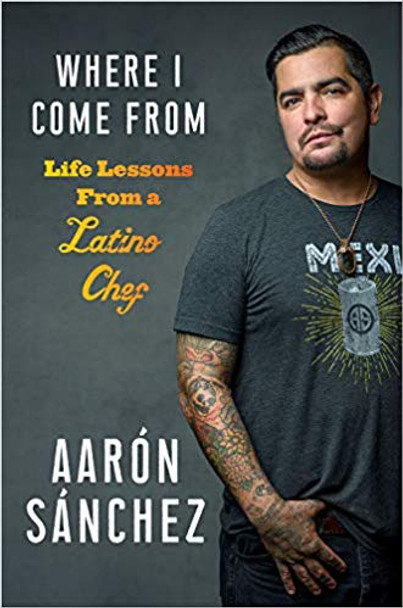 Where I Come from: Life Lessons from a Latino Chef

America’s most prominent Latino chef shares the story behind his food, his family, and his professional journey.

Before Chef Aarón Sánchez rose to fame on shows like MasterChef and Chopped, he was a restless Mexican-American son, raised by a fiercely determined and talented woman who was a successful chef and restaurateur in her own right—she is credited with bringing Mexican cuisine to the New York City dining scene. In many ways, Sánchez, who lost his father at a young age, was destined to follow in his mother Zarela’s footsteps. He spent nights as a child in his family’s dining room surrounded by some of the most influential chefs and restaurateurs in New York. At 16, needing direction, he was sent by his mother to work for renowned chef Paul Prudhomme in New Orleans.

In this memoir, Sánchez delves into his formative years with remarkable candor, injecting his story with adrenaline and revealing how he fell in love with cooking and started a career in the fast-paced culinary world. Sánchez shares the invaluable lessons he learned from his upbringing and his training—both inside and outside the kitchen—and offers an intimate look into the chaotic and untraditional life of a professional chef and television personality. This memoir is Sánchez’s highly personal account of a fatherless Latino kid whose talent and passion took him to the top of his profession.

The book, Where I Come from: Life Lessons from a Latino Chef [Bulk, Wholesale, Quantity] ISBN# 9781419738029 in Hardcover by Aaron Sanchez may be ordered in bulk quantities. Minimum starts at 25 copies. Availability based on publisher status and quantity being ordered.
View AllClose

Where Do Chicks Come From?

Where You Go: Life Lessons from My Father

MSRP:
Now:
As low as
Was:
Charlotte Pence offers a touching portrait of her father, Vice President Mike Pence, and the most important lessons he has taught her. Through stories intimately illustrating our vice president's...

Where Do I Begin?: Stories from a Life Lived Out Loud

MSRP:
Now:
As low as
Was:
Elvis Duran, host of one of the nation’s top morning shows and the voice millions of Americans wake up to, shares his wildest stories and hardest-learned lessons all with his trademark heart,...

Wise Guy: Lessons from a Life

MSRP:
Now:
As low as
Was:
Silicon Valley icon and bestselling author Guy Kawasaki shares the unlikely stories of his life and the lessons we can draw from them. Guy Kawasaki has been a fixture in the tech world since he was...

Where I Come from: Life Lessons from a Latino Chef [Paperback]

MSRP:
Now:
As low as
Was:
America’s most prominent Latino chef shares the story behind his food, his family, and his professional journeyBefore Chef Aarón Sánchez rose to fame on shows such as MasterChef and Chopped, he was a...

Where I Come from: Life Lessons from a Latino Chef [Paperback]

MSRP:
Now:
As low as
Was:
America’s most prominent Latino chef shares the story behind his food, his family, and his professional journeyBefore Chef Aarón Sánchez rose to fame on shows such as MasterChef and Chopped, he was a...

MSRP:
Now:
As low as
Was:
The book, The Autobiography Of Malcolm X [ Bulk Wholesale Quantity ] ISBN 345350685 in by Malcolm X may be ordered in bulk quantities . Bulk book availability based on publisher status and quantity...

MSRP:
Now:
As low as
Was:
A young man newly rich tries to recapture the past and win back his former love, despite the fact that she has married. The book, The Great Gatsby (Turtleback School & Library Binding Edition) [Bulk,...

MSRP:
Now:
As low as
Was:
Pulitzer Prize-winning author of Fences and The Piano Lesson Winner of the New York Drama Critics Circle Award for Best Play The time is 1927. The place is a run-down recording studio in Chicago. Ma...

The Worst Class Trip Ever

MSRP:
Now:
As low as
Was:
In this hilarious novel, written in the voice of eighth-grader Wyatt Palmer, Dave Barry takes us on a class trip to Washington, DC.... The book, The Worst Class Trip Ever [Bulk, Wholesale, Quantity]...

MSRP:
Now:
As low as
Was:
In RUN FOREVER, Boston Marathon winner and former Runner's World editor-in-chief Amby Burfoot shares practical advice and wisdom on how to run with greater joy and health for an entire lifetime. ...

MSRP:
Now:
As low as
Was:
All summer Oliver and his dad played together, laughed together, sang together, and read together. Now it's time for Oliver to start school! On the first day, Oliver's dad isn't quite ready. . . ...

The Line Becomes a River: Dispatches from the Border

MSRP:
Now:
As low as
Was:
"A must-read for anyone who thinks "build a wall" is the answer to anything." --Esquire For Francisco Cantú, the border is in the blood: his mother, a park ranger and daughter of a Mexican immigrant,...

The Wide-Mouthed Frog: A pop-up Book

MSRP:
Now:
As low as
Was:
From the Okefenokee Swamp comes a frog with a wide mouth that he just loves to use. He's particularly interested in the eating habits of other creatures found in the great outdoors--that is, of...