Why Young Men: The Dangerous Allure of Violent Movements and What We Can Do about It 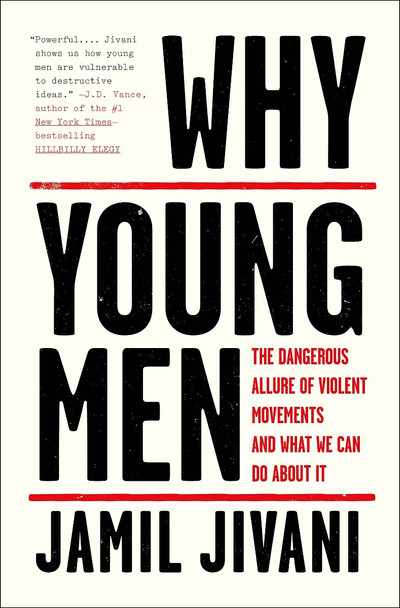 Why Young Men: The Dangerous Allure of Violent Movements and What We Can Do about It

Across the world, we see an explosion of unpredictable violence committed by alienated young men.

Jamil Jivani recounts his experiences working as a youth activist throughout North America and the Middle East, drawing striking parallels between ISIS recruits, gangbangers, and Neo-Nazis in the West.

Having narrowly escaped a descent into crime and gang violence in his native Toronto, Jivani has devoted his life to helping other at-risk youths avoid this fate in cities across North America. After the Paris terrorist attacks of 2016, he traveled to Europe and the Middle East to assist Muslim community outreach groups focused on deterring ISIS recruitment.

Why Young Men is the story of Jivani’s education as an activist on the front lines of one of today’s most dangerous and intractable problems: the explosion of violence among angry young men throughout the world. Jivani relates his personal story and describes his entrance into the community outreach movement, his work with disenfranchised people of color in North America and at-risk youth in the Middle East and Africa, and his experiences with the white working class. The reader learns along with him as he profiles a diverse array of young men and interviews those who are trying to help them, drawing parallels between these groups, refuting the popular belief that they are radically different from each other, and offering concrete steps toward countering this global trend.

The book, Why Young Men: The Dangerous Allure of Violent Movements and What We Can Do about It [Bulk, Wholesale, Quantity] ISBN# 9781250199898 in Hardcover by Jamil Jivani may be ordered in bulk quantities. Minimum starts at 25 copies. Availability based on publisher status and quantity being ordered.
View AllClose

The Psychopath Epidemic: Why the World Is So F*cked Up and What You Can Do about It

MSRP:
Now:
As low as
Was:
Similar to the bestselling Sociopath Next Door comes a unique look at the psychopaths among us and how our society--from businesses and governments to religions--encourages and rewards psychopathic...

MSRP:
Now:
As low as
Was:
Pulitzer Prize-winning business reporter Charles Duhigg knows all about habits thanks to dedicated research, which is why he wrote the book on it. The Power of Habit: Why We Do What We Do in Life and...

Meltdown: Why Our Systems Fail and What We Can Do About It

MSRP:
Now:
As low as
Was:
A groundbreaking take on how complexity causes failure in all kinds of modern systems--from social media to air travel--this practical and entertaining book reveals how we can prevent meltdowns in...

Asking for It: The Alarming Rise of Rape Culture--And What We Can Do about It

MSRP:
Now:
As low as
Was:
Every seven minutes, someone in America commits a rape. And whether that's a football star, beloved celebrity, elected official, member of the clergy, or just an average Joe (or Joanna), there's...

Distracted: Why Students Can't Focus and What You Can Do about It

MSRP:
Now:
As low as
Was:
Keeping students focused can be difficult in a world filled with distractions -- which is why a renowned educator created a scientific solution to one of every teacher's biggest problems. Why is it...

The Psychopath Epidemic: Why the World Is So F*cked Up and What You Can Do about It

MSRP:
Now:
As low as
Was:
Similar to the bestselling Sociopath Next Door comes a unique look at the psychopaths among us and how our society--from businesses and governments to religions--encourages and rewards psychopathic...

Faith After Doubt: Why Your Beliefs Stopped Working and What to Do about It

MSRP:
Now:
As low as
Was:
From the author of A New Kind of Christianity comes a bold proposal: only doubt can save the world and your faith. "Will help you live fuller and breathe easier..” ―Glennon Doyle Sixty-five...

Tuesdays at the Castle [Paperback]

MSRP:
Now:
As low as
Was:
See where it all began with the start to Jessica Day George's bestselling series about a castle that can rebuild itself and the children who defend it. Tuesdays at Castle Glower are Princess Celie's...

MSRP:
Now:
As low as
Was:
The incredible life story of Haben Girma, the first Deafblind graduate of Harvard Law School, and her amazing journey from isolation to the world stage. Haben grew up spending summers with her...

When I Was White: A Memoir [Hardcover]

MSRP:
Now:
As low as
Was:
The stunning and provocative coming-of-age memoir about Sarah Valentine's childhood as a white girl in the suburbs of Pittsburgh, and her discovery that her father was a black man. At the age of 27,...

MSRP:
Now:
As low as
Was:
Before The 5th Wave, there was Alfred Kropp. This second book in Rick Yancey's lauded series was called a "rip-roaring story that teens will love" in School Library Journal's starred review. Now the...