Don't Burn This Book: Thinking for Yourself in an Age of Unreason 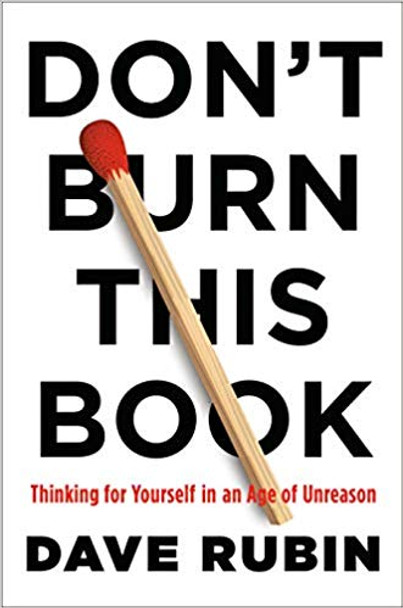 Don't Burn This Book: Thinking for Yourself in an Age of Unreason

From host of The Rubin Report, the most-watched talk show about free speech and big ideas on YouTube right now, a roadmap for free thinking in an increasingly censored world.

The left is no longer liberal.

Once on the side of free speech and tolerance, progressives now ban speakers from college campuses, "cancel" people who aren't up to date on the latest genders, and force religious people to violate their conscience. They have abandoned the battle of ideas and have begun fighting a battle of feelings. This uncomfortable truth has turned moderates and true liberals into the politically homeless class.

Dave Rubin launched his political talk show The Rubin Report in 2015 as a meeting ground for free thinkers who realize that partisan politics is a dead end. He hosts people he both agrees and disagrees with--including those who have been dismissed, deplatformed, and despised--taking on the most controversial issues of our day. As a result, he's become a voice of reason in a time of madness.

Now, Rubin gives you the tools you need to think for yourself in an age when tribal outrage is the only available alternative. Based on his own story as well as his experiences from the front lines of the free speech wars, this book will empower you to make up your own mind about what you believe on any issue and teach you the fine art of:

• Checking your facts, not your privilege, when it comes to today's most pervasive myths, from the wage gap and gun violence to climate change and hate crimes.
• Standing up to the mob against today's absurd PC culture, when differences of opinion can bring relationships, professional or personal, to a sudden end.
• Defending classically liberal principles such as individual rights and limited government, because freedom is impossible without them.

The Progressive Woke Machine is waging war against the last free thinkers in the world. Don't Burn This Book is the definitive account of our current political upheaval and your guide to surviving it.

The book, Don't Burn This Book: Thinking for Yourself in an Age of Unreason [Bulk, Wholesale, Quantity] ISBN# 9780593084298 in Hardcover by Dave Rubin may be ordered in bulk quantities. Minimum starts at 25 copies. Availability based on publisher status and quantity being ordered.
View AllClose

Think for Yourself: The Ultimate Guide to Critical Thinking in an Age of Information Overload

MSRP:
Now: $14.95
Was:
Middle school is a time of change, when things begin to look different and assumptions start to be questioned, and today more than ever it's tough to know what to believe. This unique and timely book...

The Optimist's Telescope: Thinking Ahead in a Reckless Age

MSRP:
Now: $28.00
Was:
A trailblazing exploration of how we can plan better for the future: our own, our families’, and our society’s. Instant gratification is the norm today—in our lives, our culture, our economy, and...

The Book of ME: A Do-It-Yourself Memoir

MSRP:
Now: $14.99
Was:
With hundreds of guided questions organized into sections about your past, present, and future, family history, and inner self, The Book of Me offers an excellent means to preserve memories and to...

The Organized Mind: Thinking Straight in the Age of Information Overload

A Field Guide to Lies: Critical Thinking in the Information Age

MSRP:
Now: $28.00
Was:
From The New York Times bestselling author of THE ORGANIZED MIND and THIS IS YOUR BRAIN ON MUSIC, a primer to the critical thinking that is more necessary now than ever. We are bombarded with more...

MSRP:
Now: $25.95
Was:
Organizational change doesn't have to be so difficult. Leading change expert Jake Jacobs shares eight fail-safe ways to make any change initiative at any organization easier, faster, and more...

Skills for Career Success: Maximizing Your Potential at Work

MSRP:
Now: $34.95
Was:
This career development tool kit is for people who want to take charge of their own professional futures. If you want to have a career that is meaningful and inspires you, you must prepare for it...

The Art of Alignment: A Practical Guide to Inclusive Leadership

MSRP:
Now: $15.99
Was:
Leadership often seems like an uphill battle. The problem is, most leaders don’t know how to get people aligned behind a good idea. It can be practically impossible to get everyone on the same page,...

MSRP:
Now: $39.95
Was:
In late 1945 local Japanese turned their energies toward creating new behaviors and institutions that would give young people better skills to combat repression at home and coercion abroad. They...

Laughing at My Nightmare [Hardcover]

MSRP:
Now: $17.99
Was:
With acerbic wit and a hilarious voice, Burcaw describes the challenges he faces as a 21-year-old with muscular atrophy.... The book, Laughing at My Nightmare [Bulk, Wholesale, Quantity] ISBN#...

MSRP:
Now: $18.99
Was:
Drawing upon a six-year research project at the Stanford University Graduate School of Business, James C. Collins and Jerry I. Porras took eighteen truly exceptional and long-lasting companies and...

Taking the Leap: Freeing Ourselves from Old Habits and Fears [Paperback]

MSRP:
Now: $16.95
Was:
Learn to free yourself from destructive habits and live a life of courage and compassion with these heart-to-heart teachings from "one of the world's wisest women" (O, the Oprah Magazine). Ever feel...

Magnus Chase and the Gods of Asgard, Book 2 the Hammer of Thor [Hardcover]

MSRP:
Now: $19.99
Was:
Thor's hammer is missing again. The thunder god has a disturbing habit of misplacing his weapon--the mightiest force in the Nine Worlds. But this time the hammer isn't just lost, it has fallen into...