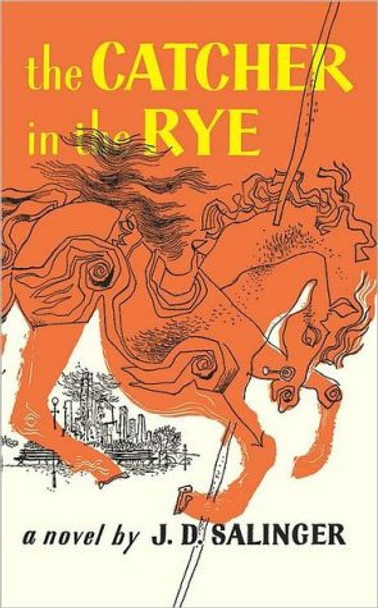 MSRP:
Now: List Price $9.99
Was:
— You save
Mass Market Paperback
This product qualifies for FREE US Ground Shipping on orders over $100.

A truly original work by one of the most famous authors in the last century, J.D. Salinger’s The Catcher in the Rye has been studied and written about for decades. While Salinger’s other works set in New York during the 1950s, such as Franny and Zoey, have also received acclaim, The Catcher in the Rye remains his most iconic work. This story centers around the restless 16-year-old Holden Caulfield. Caulfield narrates his own story, which begins with the retelling of his fourth expulsion from an East Coast preparatory school. Holden struggles to find a connection to anyone since he is constantly annoyed or irritated by his peers as well as superiors. Holden is even quick to anger, and a scuffle with a classmate ultimately motivates him to leave school and trek into New York on his own, without letting his parents know. In the city, Holden has strange encounters with people, generally do to his odd questions and confusing approach to strangers. He continuously attempts to interact with women and girls his own age, as well as several figures from his past, though his interactions often fall flat. A coming-of-age story, this classic education title is recommended for readers ages 14 or older, or with at least a high school reading level. Order a classroom novel set for your school or education program’s next literary event, library-sponsored reading club or classroom curriculum. BookPal, the leading bulk books distributor, offers this title and other class book sets at highly discounted prices. BookPal is dedicated to providing brand-new, quality wholesale books. We offer an extensive catalog of education books in bulk, bargain books and class sets of books. ISBN 9780316769488 Mass Market Paperback Author: J.D. Salinger

The book, The Catcher in the Rye [Bulk, Wholesale, Quantity] ISBN# 9780316769488 in Mass Market Paperback by Salinger, J. D. may be ordered in bulk quantities. Minimum starts at 25 copies. Availability based on publisher status and quantity being ordered.
View AllClose

Catcher with a Glass Arm

MSRP:
Now:
As low as
Was:
A young baseball player struggles to overcome his fear of a pitched ball, improve his throwing, and somehow redeem himself in the eyes of his teammates. The book, Catcher with a Glass Arm [Bulk,...

MSRP:
Now:
As low as
Was:
While Kimmy's parents look for a house close to Daddy's job, Kimmy stays with her Chippewa grandmother. The bad dreams she has had still bother her. But with her grandmother's help, she learns about...

Peter and the Starcatchers

MSRP:
Now:
As low as
Was:
Don'teven think of starting this bookunless you're sitting in a comfortable chair and have lots of time. Afast-paced, impossible-to-put-down adventure awaits as the young orphan Peterand his mates...

MSRP:
Now:
As low as
Was:
In an effort to escape the hypocrisies of life at his boarding school, 16-year-old Holden Caulfield seeks refuge in New York City... The book, The Catcher In The Rye (Turtleback School & Library...

The Catcher in the Rye [Paperback]

MSRP:
Now:
As low as
Was:
Anyone who has read J.D. Salinger's New Yorker stories--particularly A Perfect Day for Bananafish, Uncle Wiggily in Connecticut, The Laughing Man, and For Esme With Love and Squalor--will not be...

MSRP:
Now:
As low as
Was:
“To Kill a Mockingbird” by Harper Lee is a classic novel about a lawyer in the Deep South who is appointed to defend a black man accused of raping a white woman. Praised for its critical...

The House on Mango Street

MSRP:
Now:
As low as
Was:
A beloved work of fiction – translated in dozens of languages and read by both adults and teens – The House On Mango Street has been in publication for over 30 years. Author Sandra...

Of Mice and Men

MSRP:
Now:
As low as
Was:
In true John Steinbeck fashion, Of Mice and Men tells the story of love and relationships, set to the background of California farmland during the Great Depression. An American classic, the story...