The Immortal Life of Henrietta Lacks 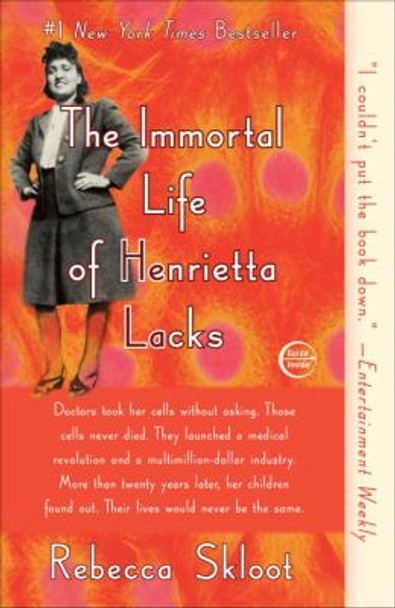 The Immortal Life of Henrietta Lacks

A deeply profound story based on real events, The Immortal Life of Henrietta Lacks is an investigation into the large impact one woman has made on the medical community. While Henrietta Lacks was completely unaware of her contribution, her family eventually finds out completely by accident that the medical community had been using her cells for cancer research all over the world. When Lacks, a poor African American wife and mother of five, discovered something abnormal with her cervix, she went to Johns Hopkins Hospital. Ultimately Lacks was diagnosed with cervical cancer and began receiving treatment. Yet, Lacks was unaware that some of her cells had been sampled and taken to the lab to be grown in test tubes. Lacks cells were just what these scientists had been hoping for, since her cells were able to continuously divide, allowing for an endless supply of cells to use for research. Unfortunately for Henrietta, that meant that her cancer could grow faster than the therapy could treat it, and she passed away at age 31. Following her passing, Lacks left behind a family unable to take care of itself. Her husband asked a cousin and his wife to come and help take care of the children, though ultimately their influence led to continuous abuse and torment, creating profound repercussions for the children. Meanwhile, their mother’s cells continued to circulate in the world without their knowledge. It isn’t until a chance encounter with one of the children leads to the discovery of the monumental impact their mother’s cells had on the scientific community. In this book, scientific writer Rebecca Skloot dives deep into the serious historical, racial and scientific effects of Henrietta Lacks. With its focus on science, medicine, history and race, this title is recommended for college level readers. This bestselling nonfiction title is the perfect college freshman reads novel. Purchase classroom novel sets of this title from BookPal to receive wholesale pricing. Buy bulk books online today! ISBN 9781400052189 Paperback Author: Rebecca Skloot

The book, The Immortal Life of Henrietta Lacks [Bulk, Wholesale, Quantity] ISBN# 9781400052189 in Paperback by Skloot, Rebecca may be ordered in bulk quantities. Minimum starts at 25 copies. Availability based on publisher status and quantity being ordered.
View AllClose

MSRP:
Now: $17.95
Was:
Where do we go when we die? Use this vibrantly illustrated story to guide your kids through the grieving process, with the help of a jellyfish that eternally regenerates and a young boy missing his...

Life Without Lack: Living in the Fullness of Psalm 23 [Paperback]

MSRP:
Now: $16.99
Was:
From beloved teacher and bestselling author Dallas Willard, an exploration of Psalm 23 and the secret of living a life of contentment, peace, and security. Now in trade paper. Psalm 23 begins with...

MSRP:
Now: $28.00
Was:
Her name was Henrietta Lacks, but scientists know her as HeLa. She was a poor Southern tobacco farmer who worked the same land as her slave ancestors, yet her cells—taken without her knowledge—became...

MSRP:
Now: $28.20
Was:
The book, The Immortal Life Of Henrietta Lacks [ Bulk Wholesale Quantity ] ISBN 1400052181 in by Skloot, Rebecca may be ordered in bulk quantities . Bulk book availability based on publisher status...

Life Without Lack: Living in the Fullness of Psalm 23

MSRP:
Now: $22.99
Was:
Learn the secret of living with contentment, peace, and security. Pause for a moment and ask yourself what your life would be like if it were completely without fear? If you did not fear death. If...

MSRP:
Now: $12.99
Was:
In this bestselling young adult book, award winning author John Green tells the story of a young boy’s first adventures with friendship, love and even loss. Green is the author of other bestselling...

MSRP:
Now: $16.99
Was:
Pat O'Toole and his brother, Coop, are on the run from an enemy that specializes in hiding in plain sight. Along with their new companion, Kate, they've narrowly escaped a cultlike community situated...

Be Careful What You Wish For

MSRP:
Now: $6.99
Was:
Discover the bone-chilling adventures that made Goosebumps one of the bestselling children's book series of all time. Now with all-new bonus materials! Samantha Byrd is a klutz. An accident waiting...

MSRP:
Now: $19.95
Was:
A citizen's guide to America's most debated policy-in-waiting There are few issues as consequential in the lives of Americans as health care--and few issues more politically vexing. Every single...

Unbound: A Woman's Guide to Power

MSRP:
Now: $27.00
Was:
The ultimate guide to owning your power--and mastering how to use it. How can so many women feel "good and mad" yet still reluctant to speak up in a meeting or difficult conversation? Why do women...

The Business of Excellence: Building High-Performance Teams and Organizations [Paperback]

MSRP:
Now: $15.00
Was:
The Business of Excellence offers a unique and compelling perspective on the drivers of excellence in teams and organizations. The author, Justin Hughes, brings an unusual mix of experience and...

MSRP:
Now: $50.00
Was:
Experience 15 of the West’s finest rustic modern homes in this beautifully written and photographed book. An intimate peek into rustic modern private homes and other properties across the Mountain...