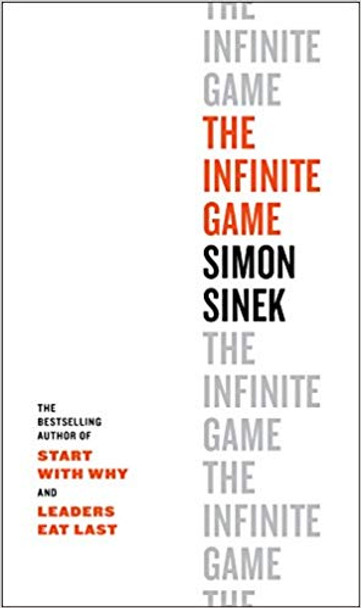 Simon Sinek's Start With Why and Leaders Eat Last have helped millions of readers see the hidden rules that govern our behavior. Now The Infinite Game challenges us to rethink our perspective with a deceptively simple question: How do you stay ahead in a game with no end?

Games like basketball and chess are finite, with firm rules and clear endpoints. But business, for example, is infinite -- there's ultimately no such thing as "winning" because there's always a new set of challenges. Those who thrive in the long run are those who play by infinite rules. They do things that enable them to out-maneuver, out-innovate, and outlast their competitors.

Trying to play an infinite game with a finite mindset can be catastrophic. During the Vietnam War, for instance, America won nearly every battle and killed many more enemy troops. But the Americans lost the war because the North Vietnamese were willing to endure any hardship, for as long as it took to force the Americans to give up.

Through a wide range of examples, Sinek explores how infinite players in any field can exhaust their competitors, stay ahead for the long run, and create strong organizations, built to weather nearly any storm. Great leaders instinctively play the infinite game; now the rest of us can understand how they do it.

The finite thinker focuses on...
* A company's quarterly earnings
* Winning a presidential election
* Winning an Olympic medal
* Squeezing the last dollar from a negotiation
* Raising an obedient child
* Closing a sale
* What and How

The infinite thinker focuses on...
* A company's reputation
* Leading the nation
* Becoming as good as you can possibly be at your sport
* Making your partner want to do business with you again
* Raising an inquisitive child
* Building a customer relationship
* Why

The book, The Infinite Game [Bulk, Wholesale, Quantity] ISBN# 9780735213500 in Hardcover by may be ordered in bulk quantities. Minimum starts at 25 copies. Availability based on publisher status and quantity being ordered.
View AllClose

MSRP:
Now:
As low as
Was:
The New York Times bestselling author, teacher, and speaker provides the next step beyond his immensely popular Notes from the Universe trilogy with this special 10th anniversary edition of the...

MSRP:
Now:
As low as
Was:
New York Times bestselling author Deepak Chopra unlocks the secrets to moving beyond our present limitations to access a field of infinite possibilities. How does one do this? By becoming metahuman. ...

The Infinite Sea: The Second Book of the 5th Wave

MSRP:
Now:
As low as
Was:
The riveting follow-up to the New York Times bestselling The 5th Wave, hailed by Justin Cronin as “wildly entertaining.” How do you rid the Earth of seven billion humans? Rid the humans of their...

MSRP:
Now:
As low as
Was:
Neville Goddard, most often known simply as Neville, is one of the most powerful writers in the realm of mystical spirituality. Unknown during his lifetime, his work has grown increasingly popular,...

MSRP:
Now:
As low as
Was:
“A knockout of a novel…we predict [Infinite Country] will be viewed as one of 2021’s best.” —O, The Oprah Magazine “An exquisitely told story of family, war, and migration, this is a novel our...

MSRP:
Now:
As low as
Was:
True to its name, DK Eyewitness Travel Guide: Top 10 Chicago covers all the region's major sights and attractions in easy-to-use "top 10" lists that help you plan the vacation that's right for you...

Energy Healing: Simple and Effective Practices to Become Your Own Healer (a Start Here Guide) [Paperback]

MSRP:
Now:
As low as
Was:
A Beginners guide to healing body and mind with energy Energy Healing is a practical guide to the unique and powerful art of restoring energy through the body to promote physical health, healing, and...

Clap When You Land [Hardcover]

MSRP:
Now:
As low as
Was:
In a novel-in-verse that brims with grief and love, National Book Award-winning and New York Times bestselling author Elizabeth Acevedo writes about the devastation of loss, the difficulty of...

MSRP:
Now:
As low as
Was:
Jack and Annie are ready for their next adventure in the New York Timesbestselling middle-grade series-the Magic Tree House! A spirited holiday mission! The magic tree house whisks Jack and Annie...

Mama and Papa Have a Store

MSRP:
Now:
As low as
Was:
From the clip, clop of the milkman s mule in the early morning to the clacking of her father s abacus at night, a young girl brings us into her home, which is also her parents store. Located in...

I Carry Your Heart with Me

MSRP:
Now:
As low as
Was:
I Carry Your Heart With Me is a children's adaptation of the beloved E. E. Cummings poem, beautifully illustrated by Mati Rose McDonough. Showing the strong bond of love between mother and child,...

MSRP:
Now:
As low as
Was:
Dante Alighieri paved the way for modern literature, while creating verse and prose that remain unparalleled for formal elegance, intellectual depth, and emotional grandeur. The Portable Dante...

MSRP:
Now:
As low as
Was:
AWARDS: 2008 Pura Belpré Honor Book for Illustration Américas Award, International Latino Book Award, and Christopher Award-winning author. Can you imagine a shipwrecked sailor living on air and...

The Dirty War on Syria

MSRP:
Now:
As low as
Was:
The Dirty War on Syria has relied on a level of mass disinformation not seen in living memory. In seeking regime change the big powers sought to hide their hand, using proxy armies of Islamists ,...