The Luckiest Man: How a Seventeen-Year Battle with ALS Led Me to Intimacy with God 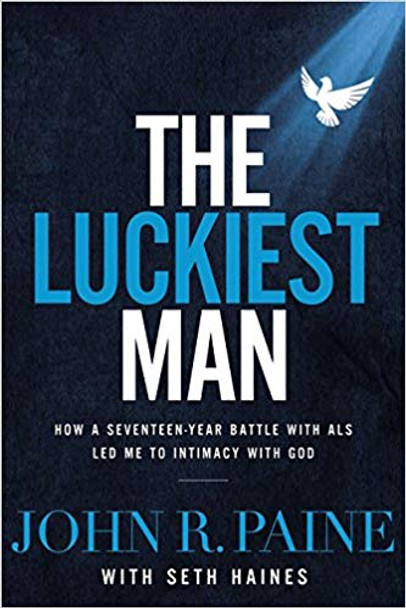 The Luckiest Man: How a Seventeen-Year Battle with ALS Led Me to Intimacy with God

MSRP:
Now: List Price $22.99
Was:
— You save
Hardcover
This product qualifies for FREE US Ground Shipping on orders over $100.

At middle age, John Paine thought he knew what it meant to have a relationship with God. He was a successful businessman, a well-respected Christian leader, a Bible teacher, and--outwardly, at least--the spiritual leader of his family. He was satisfied and thought he understood what it meant to know and experience God. But did he?

John's journey into true, mystical intimacy with God began when a neurologist diagnosed him with ALS, or Lou Gehrig's disease, and said, "Go home and get your affairs in order." Seventeen years later, John tells his story, recounting the ways God intervened in his life, freeing him from all that prevented intimacy with God, even as John slipped into pain, paralysis, and further toward death.

In stunning, insightful prose, The Luckiest Man points to the God who lovingly, though occasionally painfully, drew John into the richness of friendship. In this profoundly moving memoir, John Paine reveals the secret to intimacy with God and provides hope to all who are in the middle of their own trials. They, too, will understand why John considers himself the "luckiest man."

The book, The Luckiest Man: How a Seventeen-Year Battle with ALS Led Me to Intimacy with God [Bulk, Wholesale, Quantity] ISBN# 9781400210022 in Hardcover by John R. Paine and Seth Haines may be ordered in bulk quantities. Minimum starts at 25 copies. Availability based on publisher status and quantity being ordered.
View AllClose

Luckiest Man: The Life and Death of Lou Gehrig

MSRP:
Now:
As low as
Was:
The definitive account of the life and tragic death of baseball legend Lou Gehrig. Lou Gehrig was a baseball legend—the Iron Horse, the stoic New York Yankee who was the greatest first baseman in...

The Longing in Me: How Everything You Crave Leads to the Heart of God

MSRP:
Now:
As low as
Was:
Do your desires have you going around in circles? You may be looking for fulfillment in all the wrong places. You vowed you’d never repeat the same mistakes—yet you find yourself right where you...

MSRP:
Now:
As low as
Was:
Lou Gehrig's perseverance is legendary. During fourteen years as a first baseman for the New York Yankees, he played in a record 2,130 consecutive games, earning himself the nickname Iron Horse......

MSRP:
Now:
As low as
Was:
A deeply personal and candid remembrance of the late Senator John McCain from one of his closest and most trusted confidants, friends, and political advisors. More so than almost anyone outside of...

Factory Man: How One Furniture Maker Battled Offshoring, Stayed Local - And Helped Save an American Town

MSRP:
Now:
As low as
Was:
The instant New York Times bestseller about one man's battle to save hundreds of jobs by demonstrating the greatness of American business. The Bassett Furniture Company was once the world's biggest...

The Strategy Paradox: Why committing to success leads to failure (and what to do about It)

MSRP:
Now:
As low as
Was:
A compelling vision. Bold leadership. Decisive action. Unfortunately, these prerequisites of success are almost always the ingredients of failure, too. In fact, most managers seeking to maximize...

MSRP:
Now:
As low as
Was:
Let Scholastic Bookshelf be your guide through the whole range of your child's experiences-laugh with them, learn with them, read with them! Eight classic, best-selling titles are available now!...

MSRP:
Now:
As low as
Was:
A ground-breaking and brave inside reckoning with the nexus of prison and profit in America: in one Louisiana prison and over the course of our country's history. In 2014, Shane Bauer was hired for...

Incendiary: The Psychiatrist, the Mad Bomber, and the Invention of Criminal Profiling [Hardcover]

MSRP:
Now:
As low as
Was:
Long before the specter of terrorism haunted the public imagination, a serial bomber stalked the streets of 1950s New York. The race to catch him would give birth to a new science called criminal...

MSRP:
Now:
As low as
Was:
Labeled photographs present the English and Spanish words for various types of trucks.... The book, Trucks (Camiones) [Bulk, Wholesale, Quantity] ISBN# 9780312502997 in Board Book by Priddy, Roger...

Quench Your Own Thirst: Business Lessons Learned Over a Beer or Two [Paperback]

MSRP:
Now:
As low as
Was:
NATIONAL BESTSELLER and named a 2016 Best Book of the Year by Inc., Business Insider, Forbes, and Amazon “Boston Beer’s Jim Koch offers readers a six-packof wisdom.” – The Boston Globe "Like Steve...