The Once and Future Worker: A Vision for the Renewal of Work in America 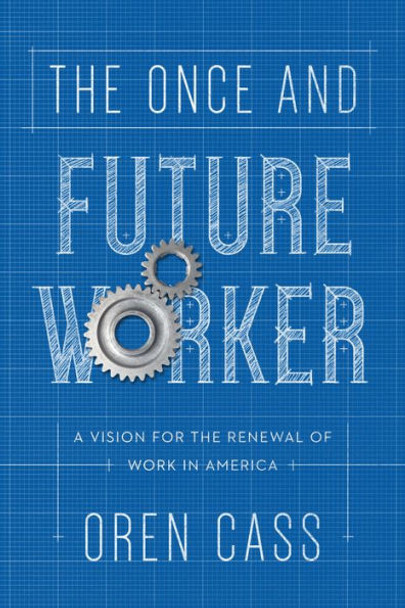 The Once and Future Worker: A Vision for the Renewal of Work in America

Minimum purchase of 1 required for this product.

With Donald Trump’s rise to the presidency has come widespread awareness of the economic and social crisis facing much of the nation. Yet while everyone now cares, no one understands what happened or knows what to do. Most recommendations presume that we should proceed down our present path while somehow creating better government programs to drag along everyone falling behind. “I’m for globalization and a strong safety net” seems likely to become for the next generation of insulated but determinedly respectable professionals what “I’m socially liberal and fiscally conservative” was for the last. How this differs from what we have been trying, or why it should work better, is anyone’s guess. The Once and Future Worker steps into this gaping void. It explains how decades of bad public policy, not irresistible and uncontrollable forces, have pushed America to the brink. The 1960s are known for their social upheaval, but the decade also marked the bipartisan transition to a national economic policy that sacrificed the needs and interests of workers in pursuit of faster growth and rising consumption. That mistake has eroded the foundation of productive work and destabilized the structures of family and community on which long-term prosperity depends. Looking through the lens of work flips the national debate on its head―or, rather, returns it to its feet. New approaches to reform emerge for the environment and organized labor, trade and immigration, education and the safety net. “Growing the economic pie” transforms from a pleasant platitude to the most insidious phrase in politics. The result is dismay at what we have done to ourselves, but also optimism that a thriving society remains within reach.

The book, The Once and Future Worker: A Vision for the Renewal of Work in America [Bulk, Wholesale, Quantity] ISBN# 9781641770149 in Hardcover by Oren Cass may be ordered in bulk quantities. Minimum starts at 25 copies. Availability based on publisher status and quantity being ordered.
View AllClose

The Once and Future King

MSRP:
Now:
As low as
Was:
T. H. White's masterful retelling of the saga of King Arthur is a fantasy classic as legendary as Excalibur and Camelot, and a poignant story of adventure, romance, and magic that has enchanted...

The Hill to Die on: The Battle for Congress and the Future of Trump's America

MSRP:
Now:
As low as
Was:
NEW YORK TIMES BESTSELLER • The inside story of Donald Trump’s first two years in Washington as viewed from Capitol Hill, a startling account that turns “Congress into a Game of Thrones book” (Trevor...

Hiddensee: A Tale of the Once and Future Nutcracker

MSRP:
Now:
As low as
Was:
In this imaginative novel rooted in the rich soil of early-nineteenth-century German Romanticism, beloved New York Times bestselling author Gregory Maguire twins an origin legend of the famous...

The Third Wave: An Entrepreneur's Vision of the Future

MSRP:
Now:
As low as
Was:
One of Americaâs most accomplished entrepreneursâa pioneer who made the Internet part of everyday life and orchestrated the largest merger in the history of businessâshares a roadmap for how...

The Myth of Chinese Capitalism: The Worker, the Factory, and the Future of the World [Hardcover]

MSRP:
Now:
As low as
Was:
The untold story of how restrictive policies are preventing China from becoming the world’s largest economy. Dexter Roberts lived in Beijing for two decades working as a reporter on economics,...

The Power of Agency: The 7 Principles to Conquer Obstacles, Make Effective Decisions, and Create a Life on Your Own Terms [Hardcover]

MSRP:
Now:
As low as
Was:
**A 2019 OWL AWARD SHORTLIST WINNER IN THE HEALTH & WELLNESS CATEGORY**From two eminent clinical psychologists, how to access your personal agency and adapt to living the life you choose. Agency...

Ghost Boy: The Miraculous Escape of a Misdiagnosed Boy Trapped Inside His Own Body

MSRP:
Now:
As low as
Was:
They all thought he was gone. But he was alive and trapped inside his own body for ten years. In January 1988 Martin Pistorius, aged twelve, fell inexplicably sick. First he lost his voice and...

The Thyroid Connection: Why You Feel Tired, Brain-Fogged, and Overweight -- And How to Get Your Life Back

MSRP:
Now:
As low as
Was:
From the author of the New York Times bestseller The Autoimmune Solution, a comprehensive, accessible overview of thyroid problems that will help you learn to identify the warning signs and finally...

Whoever You Are (Quienquiera Que Seas)

MSRP:
Now:
As low as
Was:
Every day all over the world, children are laughing and crying, playing and learning, eating and sleeping. Their lives may be quite different. But inside, they are all alike. Available for the first...

MSRP:
Now:
As low as
Was:
The Little Ice Cream Truck is loaded up with tasty treats in this new addition to ever-popular The Little Dump Truck, The Little School Bus and The Little Fire Truck series. Join the little ice...

We Are the Weather: Saving the Planet Begins at Breakfast [Paperback]

MSRP:
Now:
As low as
Was:
In We Are the Weather, New York Times bestselling author Jonathan Safran Foer explores the central global dilemma of our time in a surprising, deeply personal, and urgent new way. Some people reject...

Our Better Angels: Seven Simple Virtues That Will Change Your Life and the World [Hardcover]

MSRP:
Now:
As low as
Was:
For readers of Make Your Bed, a book about real-life virtues in action to inspire readers—from Habitat for Humanity, one of the world’s most admired organizations. In this powerful book from Habitat...

Silos, Politics, and Turf Wars: A Leadership Fable about Destroying the Barriers That Turn Colleagues Into Competitors

MSRP:
Now:
As low as
Was:
In yet another page-turner, New York Times best-selling author and acclaimed management expert Patrick Lencioni addresses the costly and maddening issue of silos, the barriers that create...