The Strange Case of Dr. Doyle: A Journey Into Madness & Mayhem (Revised) 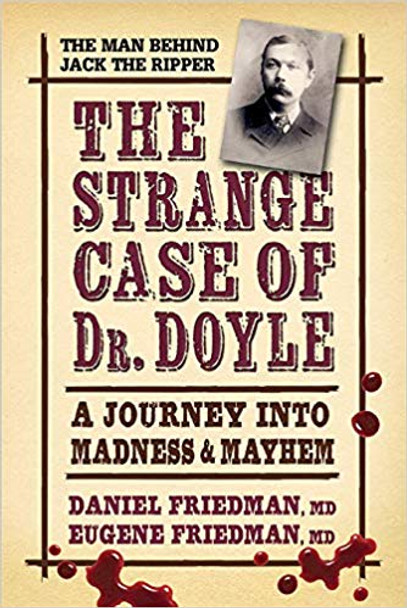 The Strange Case of Dr. Doyle: A Journey Into Madness & Mayhem (Revised)

MSRP:
Now: List Price $17.95
Was:
— You save
Paperback
This product qualifies for FREE US Ground Shipping on orders over $100.

London. 1910. A procession of well-attired gentlemen and ladies are clearly out of place among the stalls and pushcarts of the Whitechapel District. As the group makes its way through the crowded streets, the tour guide stops now and then to point out various places where the mutilated bodies of the women had been found. Although the murders occurred twenty-two years prior, the man leading the group seems to know every detail and aspect of each slaying. Of those things he does not know, he offers freely his own insightful conjecture. This is, however, no average tour of brutal acts. It is a close look at infamous serial killer Jack the Ripper's trail of blood. And the man leading the group is none other than Sir Arthur Conan Doyle―famous creator of fictional character Sherlock Holmes, the world’s greatest detective. In The Strange Case of Dr. Doyle, we learn what draws one famousn Englishman to another in ways that are as fascinating as they are shocking.

Sir Arthur Conan Doyle actually led a tour group to the sites of the Whitechapel Murders in the year 1905. While we do not have an existing description of that tour, authors Daniel Friedman, MD, and Eugene Friedman, MD, have meticulously pieced together Doyle’s own words to create a riveting account of his publicly stated beliefs on each of these horrific murders. As Doyle takes the group on his tour, the reader learns about the victims and the way each died. The authors have also included new pieces of evidence to understand better the murderer known to history only as Jack the Ripper.

Interspersed throughout the tour is the Friedmans’ unique and well-researched account of the life of the young Conan Doyle, which was shrouded in more mystery than any of his own works of fiction. The authors have uncovered facts about which few, if any, Doyle biographers have ever been aware. Doyle was able to reinvent himself so fully through his own writings that few recognized the more disturbing elements that were cut out of his own life story. What these two authors have uncovered in their investigation of Jack the Ripper and Sir Arthur will no doubt spark passion and debate among Sherlockian fans for years to come. The Strange Case of Dr. Doyle proves once again that truth―elementary as it may be―is always stranger than fiction.

The book, The Strange Case of Dr. Doyle: A Journey Into Madness & Mayhem (Revised) [Bulk, Wholesale, Quantity] ISBN# 9780757004315 in Paperback by Daniel Friedman;Eugene Friedman may be ordered in bulk quantities. Minimum starts at 25 copies. Availability based on publisher status and quantity being ordered.
View AllClose

The Strange Case of Dr. Jekyll and Mr. Hyde

MSRP:
Now:
As low as
Was:
What would happen if we could separate our better selves from our baser half? Dr. Jekyll discovers the horrifying answer in Stevenson's gripping, atmospheric novella. IllustrationsThe book, The...

MSRP:
Now:
As low as
Was:
In September of 1884, Robert Louis Stevenson, then in his mid-thirties, moved with his family to Bournemouth, a resort on the southern coast of England, where in the brief span of 23 months he...

The Strange Case of Dr. Jekyll and Mr. Hyde [Paperback]

MSRP:
Now:
As low as
Was:
Robert Louis Stevenson originally wroteDr. Jekyll And Mr Hydeas a "chilling shocker." He then burned the draft and, upon his wife's advice, rewrote it as the darkly complex tale it is today. Stark,...

MSRP:
Now:
As low as
Was:
Robert Louis Stevenson originally wrote Dr. Jekyll And Mr Hyde as a "chilling shocker." He then burned the draft and, upon his wife's advice, rewrote it as the darkly complex tale it is today. Stark,...

MSRP:
Now:
As low as
Was:
"This book is a tour de force." --Adam Grant, New York Times bestselling author of Give and Take A revolutionary new history of humankind through the prism of work by leading anthropologist James...

The Threat: How the FBI Protects America in the Age of Terror and Trump

MSRP:
Now:
As low as
Was:
From President Bill Clinton's recommended reading list Publishers Weekly Bestseller Warnings is the story of the future of national security, threatening technologies, the U.S. economy, and...

Cooking with Zac: Recipes from Rustic to Refined

MSRP:
Now:
As low as
Was:
Zac Posen takes you on a culinary journey through his life with 100 recipes every bit as decadent and inspiring as his designs. Since he was a child, world-renowned fashion designer Zac Posen has...