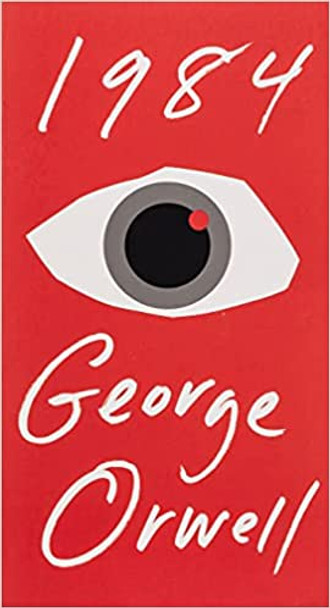 MSRP:
Now: List Price $9.99
Was:
— You save
Mass Market Paperback
This product qualifies for FREE US Ground Shipping on orders over $100.

Written by the legendary George Orwell, author of the literary classic Animal Farm, 1984 is a standard read for all high school students. The novel’s dystopian themes and social topics have made it a highly relevant and influential novel since it was first written in 1948. Orwell’s prophecy for the year 1984 may not have come true, but it certainly raises concern and contains strikingly similar elements to today's society. The novel centers around Winston Smith, who lives in a 1984 version of London, which is now a part of the nation of Oceania. Oceania is entirely controlled and monitored by the Party, who is lead by Big Brother. Big Brother is everywhere, including telescreens that allow the Party to see into Winston’s home and work. The Party already has overwhelming control everything in Oceania, but now they even want to control the way people speak. With the implementation of a new language called Newspeak any words relating to political rebellion can be eliminated. Most striking of all is the way in which the Party controls people’s thoughts. Thoughtcrimes, or thinking rebellious thoughts, is illegal. Yet Winston isn’t just another cog in the Party’s wheel. Winston has rebellious tendencies, even keeping a very illegal journal of all his rebellious thoughts. Soon, thanks to a dark-haired rebellious woman and a dissenting member of the Party, Winston is brought into the most rebellious group of all – the Brotherhood. But can even the Brotherhood be trusted? 1984 is a suspenseful dystopian novel similar to classics such as Lord of the Flies and The Giver. Due to darker and complex themes, this title is recommended for readers 14 years or older, or with a high school reading level. This education title is perfect to order as a classroom book set from BookPal. Purchase a classroom novel set of 1984 for your school’s curriculum or next literary event. BookPal is the leading distributor of books in bulk, offering both mass market paperbacks and library-bound classroom book sets. Save money for your school by ordering wholesale books from BookPal today. ISBN 9780451524935 Mass Market Paperback Author: George Orwell

The book, 1984 ( Signet Classics ) [Bulk, Wholesale, Quantity] ISBN# 9780451524935 in Mass Market Paperback by Orwell, George may be ordered in bulk quantities. Minimum starts at 25 copies. Availability based on publisher status and quantity being ordered.
View AllClose

MSRP:
Now:
As low as
Was:
For sheer storytelling delight and pure adventure, Treasure Island has never been surpassed. From young Jim Hawkins’s first encounter with the sinister beggar Pew to the climactic battle with the...

MSRP:
Now:
As low as
Was:
Beowulf is one of the earliest extant poems in a modern European language, composed in England before the Norman Conquest. As a social document this great epic poem is invaluable—reflecting a feudal...

MSRP:
Now:
As low as
Was:
Introducing one of the most famous characters in literature, Jean Valjean—the noble peasant imprisoned for stealing a loaf of bread—Les Misérables ranks among the greatest novels of all time. In it,...

MSRP:
Now:
As low as
Was:
“To Kill a Mockingbird” by Harper Lee is a classic novel about a lawyer in the Deep South who is appointed to defend a black man accused of raping a white woman. Praised for its critical...

Of Mice and Men

MSRP:
Now:
As low as
Was:
In true John Steinbeck fashion, Of Mice and Men tells the story of love and relationships, set to the background of California farmland during the Great Depression. An American classic, the story...

MSRP:
Now:
As low as
Was:
A heroic story of friendship and belonging No one ever said life was easy. But Ponyboy is pretty sure that he's got things figured out. He knows that he can count on his brothers, Darry and...

MSRP:
Now:
As low as
Was:
A truly original work by one of the most famous authors in the last century, J.D. Salinger’s The Catcher in the Rye has been studied and written about for decades. While Salinger’s other works set in...

MSRP:
Now:
As low as
Was:
A PBS Great American Read Top 100 Pick With extraordinary relevance and renewed popularity, George Orwell’s 1984 takes on new life in this hardcover edition. “Orwell saw, to his credit, that the...