TJ Powar Has Something to Prove 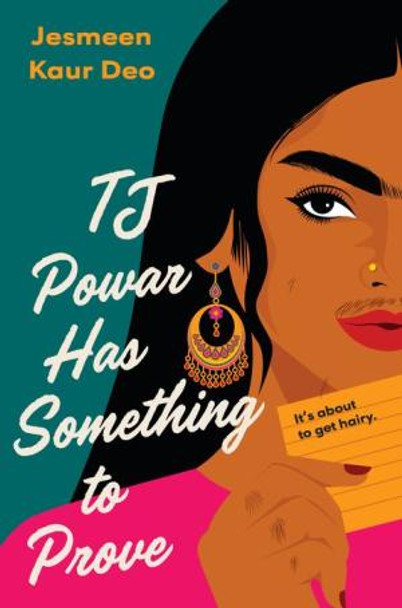 TJ Powar Has Something to Prove

When TJ Powar—a pretty, popular debater—and her cousin Simran become the subject of a meme: with TJ being the “expectation” of dating an Indian girl and her Sikh cousin who does not remove her body hair being the “reality”—TJ decides to take a stand.

She ditches her razors, cancels her waxing appointments, and sets a debate resolution for herself: “This House Believes That TJ Powar can be her hairy self, and still be beautiful.” Only, as she sets about proving her point, she starts to seriously doubt anyone could care about her just the way she is—even when the infuriating boy from a rival debate team seems determined to prove otherwise.

As her carefully crafted sense of self begins to crumble, TJ realizes that winning this debate may cost her far more than the space between her eyebrows. And that the hardest judge to convince of her arguments might just be herself.

The book, Add to Wishlist TJ Powar Has Something to Prove [Bulk, Wholesale, Quantity] ISBN# 9780593403396 in Hardcover by Jesmeen Kaur Deo may be ordered in bulk quantities. Minimum starts at 25 copies. Availability based on publisher status and quantity being ordered.
View AllClose

MSRP:
Now:
As low as
Was:
Be the first to read the thought-provoking new novel from Melissa de la Cruz, the #1 New York Times bestselling author of The Isle of the Lost and Return to the Isle of the Lost. She had her whole...

Stella Diaz Has Something to Say [Hardcover]

MSRP:
Now:
As low as
Was:
In her first middle-grade novel, award-winning picture book author and illustrator Angela Dominguez tells a heartwarming story based on her own experiences growing up Mexican-American. Stella Diaz...

MSRP:
Now:
As low as
Was:
In her first middle-grade novel, award-winning picture book author and illustrator Angela Dominguez tells a heartwarming story based on her own experiences growing up Mexican-American. Stella Diaz...

Jesus Is God: Scripture Proves It

MSRP:
Now:
As low as
Was:
I am a simple man writing an unbiased look at one of the Bibles' hottest topics; Is Jesus God? I give you the simple facts, plain Scripture, and a straight forward view of what is being said in the...

The Name She Gave Me

MSRP:
Now:
As low as
Was:
Rynn was born with a hole in her heart—literally. Although it was fixed long ago, she still feels an emptiness there when she wonders about her birth family. As her relationship with her adoptive...

The Fight to Save the Town: Reimagining Discarded America

MSRP:
Now:
As low as
Was:
Decades of cuts to local government amidst rising concentrations of poverty have wreaked havoc on communities left behind by the modern economy. Some of these discarded places are rural. Others are...

MSRP:
Now:
As low as
Was:
Everyone has a story. These are ours. Each one of these tales connects you to someone you never knew. A real person, sharing their lived experience. Exciting, inspirational, heartwrenching,...

My Name Is a Story

MSRP:
Now:
As low as
Was:
First days aren’t easy for a girl with a name like Ashanti. It feels like no one can pronounce it correctly! But with some encouragement from her mom, Ashanti spells her name and learns just how...

I Forgive Alex: A Simple Story About Understanding

MSRP:
Now:
As low as
Was:
Alex’s enthusiasm and energy can sometimes be a challenge for his classmates. He loves to play ball on the playground with his friends, but when his rambunctious behavior inadvertently upsets one of...

That's Not My Name!

MSRP:
Now:
As low as
Was:
Mirha is so excited for her first day of school! She can't wait to learn, play, and make new friends. But when her classmates mispronounce her name, she goes home wondering if she shound find a new...

The Distance Between Us: Young Readers Edition

MSRP:
Now:
As low as
Was:
When her parents make the dangerous and illegal trek across the Mexican border in pursuit of the American dream, Reyna and her siblings are forced to live with their stern grandmother, as they wait...

Dare to Lead Like a Girl: How to Survive and Thrive in the Corporate Jungle

MSRP:
Now:
As low as
Was:
Dare to Lead Like a Girl is a holistic look at how to achieve purpose and joy at work. It is about turning the world of work into a place where empathy, intuition, passion, and resilience take their...

Trumpet of the Swan

MSRP:
Now:
As low as
Was:
The delightful classic by E. B. White, author of Charlotte's Web and Stuart Little, about overcoming obstacles and the joy of music. Like the rest of his family, Louis is a trumpeter swan. But...

Together We Can!: A Heart-Warming Ode to Friendship, Compassion, and Kindness

MSRP:
Now:
As low as
Was:
Here's a heart-warming ode to friendship, compassion, and kindness told in rhyming verse and accompanied by charming and colorful illustrations. The message is clear — friends come in all different...