Advice from the Lights: Poems 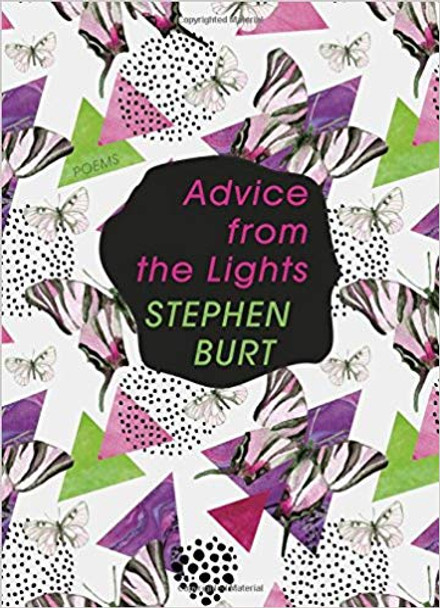 Advice from the Lights: Poems

Stephen is sometimes Stephanie and sometimes wonders how his past and her past are their own collective memory.

Advice from the Lights is a brilliant and candid exploration of gender and identity and a series of looks at a formative past. It’s part nostalgia, part confusion, and part an ongoing wondering: How do any of us achieve adulthood? And why would we want to, if we had the choice? This collection is woven from and interrupted by extraordinary sequences, including Stephanie poems about Stephen’s female self; poems on particular years of the poet’s early life, each with its own memories, desires, insecurities, and pop songs; and versions of poems by the Greek poet Callimachus, whose present-day incarnation worries (who doesn’t?) about mortality, the favor of the gods, and the career of Taylor Swift. The collection also includes poems on politics, location, and parenthood. Taken all together, this is Stephen Burt’s most personal and most accomplished collection, an essential work that asks who we are, how we become ourselves, and why we make art.

The book, Advice from the Lights: Poems [Bulk, Wholesale, Quantity] ISBN# 9781555977894 in Paperback by Stephanie (previously Stephen) Burt may be ordered in bulk quantities. Minimum starts at 25 copies. Availability based on publisher status and quantity being ordered.
View AllClose

This Same Sky: A Collection of Poems from Around the World

MSRP:
Now:
As low as
Was:
From the East and from the West, from across the oceans, from places where it is tomorrow or even yesterday, from 68 countries come 129 unforgettable voices that will thrill, sadden, surprise, and...

In the Company of Women: Inspiration and Advice from Over 100 Makers, Artists, and Entrepreneurs

MSRP:
Now:
As low as
Was:
New York Times Bestseller “I want to rip out every page of this glorious book and hang them on my wall so that I can be surrounded by these incredible women all day long.” —Emma Straub, New York...

How to Swallow a Pig: Step-By-Step Advice from the Animal Kingdom

MSRP:
Now:
As low as
Was:
In the latest eye-catching escape into the kingdom of Animalia, Steve Jenkins and Robin Page reveal the skills animals use to survive in the wild in an imaginative and humorous how-to format. With...

And the Good News Is...: Lessons and Advice from the Bright Side

MSRP:
Now:
As low as
Was:
#1 New York Times Bestseller #1 Wall Street Journal Bestseller From her years as the presidential press secretary to her debates with colleagues on Fox News' The Five, Dana Perino reveals the lessons...

MSRP:
Now:
As low as
Was:
"Staying Alive", "Being Alive" and "Being Human" have introduced many thousands of new readers to contemporary poetry, and have helped poetry lovers to discover the little known riches of world...

MSRP:
Now:
As low as
Was:
For fans of Rebecca Stead and Joan Bauer comes a scrappy, poignant, uplifting debut about family, friendship, and the importance of learning both how to offer help and how to accept it. "A...

Thrive: The Third Metric to Redefining Success and Creating a Life of Well-Being, Wisdom, and Wonder [Paperback]

MSRP:
Now:
As low as
Was:
In Thrive, Arianna Huffington makes an impassioned and compelling case for the need to redefine what it means to be successful in today's world. Arianna Huffington's personal wake-up call came in...