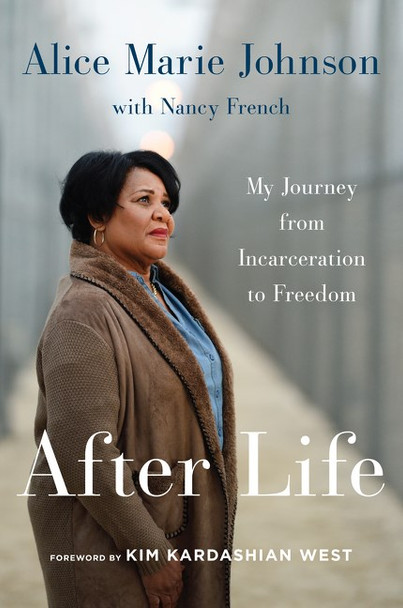 **A 2019 OWL AWARD LONGLIST WINNER IN THE BIOGRAPHY & MEMOIR CATEGORY**

For her whole life Alice Johnson had been an upstanding citizen, but in 1992, after an emotionally and financially tumultuous period left her with few options, she turned to crime as a way to pay off her mounting debts. Convicted in 1996 for her nonviolent involvement in a Memphis cocaine trafficking organization, she received life in prison under the mandatory sentencing laws of the time. Twenty years later, a video of Alice telling her story from prison went viral, and she found celebrity recognition, most notably from Kim Kardashian West, whose activism on Alice’s behalf led President Trump to commute her sentence in 2018.

In this inspiring memoir of faith, Alice recounts the story of her journey to forgiveness, detailing how she held on to her own hope while giving hope to others during her two decades of incarceration. From becoming an ordained minister to mentoring her fellow prisoners to writing plays, she reveals how Christianity and an unshakable belief in God helped her persevere, using her time behind bars to make the prison around her a better place for others. Offering an intimate portrait of America’s crisis of mass incarceration, Alice links social activism to her spiritual faith, and in the process makes a persuasive and poignant argument for the importance of achieving a justice that transcends politics.

Featuring sixteen pages of intimate, personal color photographs, After Life is a dramatic story of hope, mercy, and gratitude, a portrait that shows the realities of life behind bars and the importance of the ongoing struggle to end mass incarceration. A beacon of light in the darkness of despair, After Life serves as both a vital reminder of the power of redemption and of the importance of making second chances count.

The book, After Life: My Journey from Incarceration to Freedom [Bulk, Wholesale, Quantity] ISBN# 9780062936097 in Paperback by Alice Marie Johnson,Kim Kardashian West may be ordered in bulk quantities. Minimum starts at 25 copies. Availability based on publisher status and quantity being ordered.

Leading Matters: Lessons from My Journey

MSRP:
Now:
As low as
Was:
Scholar, engineer, philanthropist, leader. In this new book, former Stanford President John Hennessy draws on his experience as an educator and technology entrepreneur to offer thoughtful and...

The Master Plan: My Journey from Life in Prison to a Life of Purpose

MSRP:
Now:
As low as
Was:
The inspiring, instructive, and ultimately triumphant memoir of a man who used hard work and a Master Plan to turn a life sentence into a second chance. Growing up in a tough Washington, D.C.,...

Life Is Magic: My Inspiring Journey from Tragedy to Self-Discovery

MSRP:
Now:
As low as
Was:
An extraordinary and empowering story of resilience, forgiveness, and living a life of purpose in the face of unfathomable obstacles. You might recognize him as an NFL All-Pro or as an elite...

MSRP:
Now:
As low as
Was:
Foreword by Kim Kardashian West The true-life story of the woman whose life sentence for non-violent drug trafficking was commuted by President Donald Trump thanks to the efforts of Kim Kardashian...

The Master Plan: My Journey from Life in Prison to a Life of Purpose [Paperback]

MSRP:
Now:
As low as
Was:
"The Master Plan is less of a road map and more of a philosophy that we should all take to heart: We are all better than our worst decision, our sense of justice should honor the redemptive...

MSRP:
Now:
As low as
Was:
When you think “air fryer” you probably don’t think mixed berry muffins for breakfast, tuna zucchini melts for lunch, or spicy thai beef stir-fry for dinner. But, it’s not as crazy as it sounds. The...

Sophia's War: A Tale of the Revolution [Paperback]

MSRP:
Now:
As low as
Was:
A beloved Newbery Medalist pens a gripping adventure set during the Revolutionary War. After witnessing the execution of Nathan Hale in New York City, newly occupied by the British army, Sophia...

21 Lessons for the 21st Century

MSRP:
Now:
As low as
Was:
In Sapiens, he explored our past. In Homo Deus, he looked to our future. Now, one of the most innovative thinkers on the planet turns to the present to make sense of today’s most pressing issues. How...

MSRP:
Now:
As low as
Was:
The Special Care Series consists of four books designed to be read or sent to someone the third week, third month, sixth month and eleventh month following a death. They offer great comfort and...

California's Wild Edge: The Coast in Prints, Poetry, and History

MSRP:
Now:
As low as
Was:
This new volume captures the beauty of the California coast from Mendocino, Point Reyes, and the San Francisco Bay down through Carmel, Big Sur, Santa Barbara, and Santa Monica. Woodcut artist Tom...

MSRP:
Now:
As low as
Was:
Welcome to Miss Qiunzella Thiskwin Penniquiqul Thistle Crumpet’s Camp for Hardcore Lady Types. The five scouts of Roanoke cabin—Jo, April, Molly, Mal, and Ripley—love their summers at camp. They get...

I Love You More Than the Universe

MSRP:
Now:
As low as
Was:
Follow a strong-willed little girl and her tired mother through their affirmation of love for each other. This rhythmic story with beautiful watercolor illustrations depicts the deep love between a...

MSRP:
Now:
As low as
Was:
It may surprise you to hear that the Bible promises trouble. As long as we live in a sinful world, tough times will be part of our human experience. Along with the promise that troubles will come,...