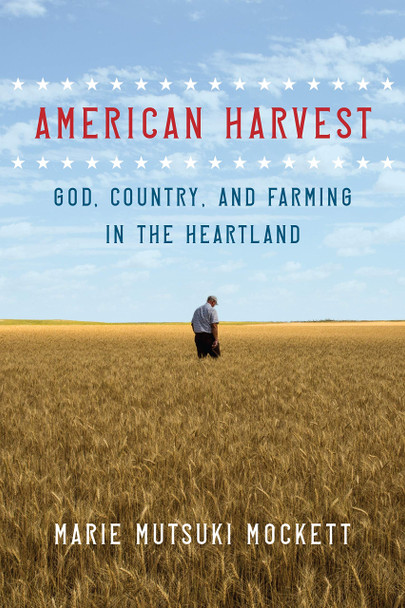 An epic story of the American wheat harvest, the politics of food, and the culture of the Great Plains

For over one hundred years, the Mockett family has owned a seven-thousand-acre wheat farm in the panhandle of Nebraska, where Marie Mutsuki Mockett’s father was raised. Mockett, who grew up in bohemian Carmel, California, with her father and her Japanese mother, knew little about farming when she inherited this land. Her father had all but forsworn it.

In American Harvest, Mockett accompanies a group of evangelical Christian wheat harvesters through the heartland at the invitation of Eric Wolgemuth, the conservative farmer who has cut her family’s fields for decades. As Mockett follows Wolgemuth’s crew on the trail of ripening wheat from Texas to Idaho, they contemplate what Wolgemuth refers to as “the divide,” inadvertently peeling back layers of the American story to expose its contradictions and unhealed wounds. She joins the crew in the fields, attends church, and struggles to adapt to the rhythms of rural life, all the while continually reminded of her own status as a person who signals “not white,” but who people she encounters can’t quite categorize.

American Harvest is an extraordinary evocation of the land and a thoughtful exploration of ingrained beliefs, from evangelical skepticism of evolution to cosmopolitan assumptions about food production and farming. With exquisite lyricism and humanity, this astonishing book attempts to reconcile competing versions of our national story.

The book, American Harvest: God, Country, and Farming in the Heartland [Bulk, Wholesale, Quantity] ISBN# 9781644450512 in Paperback by Marie Mutsuki Mockett may be ordered in bulk quantities. Minimum starts at 25 copies. Availability based on publisher status and quantity being ordered.
View AllClose

Daughter of the Heartland: My Ode to the Country That Raised Me

MSRP:
Now:
As low as
Was:
Combining the by-the-bootstraps work ethic of Nikki Haley’s Can’t Is Not an Option with the military pluck of MJ Heger’s Shoot Like a Girl, Joni Ernst’s candid memoir details the rise of one of the...

American Harvest: God, Country, and Farming in the Heartland

Notes on a Foreign Country: An American Abroad in a Post-American World

MSRP:
Now:
As low as
Was:
Winner of the Overseas Press Club of America's Cornelius Ryan Award • Finalist for the Pulitzer Prize in Nonfiction New York Times Book Review Notable Book • Named a Best Book of the Year by New...

MSRP:
Now:
As low as
Was:
The story of a huge, largely hidden, and entirely unexpected conservation movement in America. Many of the men and women doing today’s most consequential environmental work―restoring America’s...

Heartland: A Memoir of Working Hard and Being Broke in the Richest Country on Earth

MSRP:
Now:
As low as
Was:
*Finalist for the National Book Award* *Finalist for the Kirkus Prize* *Instant New York Times Bestseller* *Named a Best Book of the Year by NPR, The New York Post, BuzzFeed, Shelf Awareness, Bustle,...

Year of the Reaper

MSRP:
Now:
As low as
Was:
"I love the magic Lucier weaves through this dark yet hopeful tale. I devoured it in one sitting!" --Kristin Cashore, author of the New York Times bestselling Graceling Realm books "A...

MSRP:
Now:
As low as
Was:
Lisa Thompson returns to the world of The Goldfish Boy in her new novel. Melody Bird has discovered an old, abandoned building on the edge of town...It's a dark, creepy place, but she can't resist...

MSRP:
Now:
As low as
Was:
The 10th anniversary edition of the New York Times bestseller and international classic loved by millions of readers. The unforgettable, heartbreaking story of the unlikely friendship between a...

A Florida State of Mind: An Unnatural History of Our Weirdest State [Hardcover]

MSRP:
Now:
As low as
Was:
A witty history of the state that's always in the news, for everything from alligator attacks to zany crimes. There's an old clip of Bugs Bunny sawing the entire state of Florida off the...

MSRP:
Now:
As low as
Was:
First published in 1899, this beautiful, brief novel so disturbed critics and the public that it was banished for decades afterward. Now widely read and admired, The Awakening has been hailed as...

MSRP:
Now:
As low as
Was:
A candid, riveting account of the Trump White House, on the front lines and behind the scenes. Sarah Huckabee Sanders served as White House Press Secretary for President Donald J. Trump from 2017 to...

MSRP:
Now:
As low as
Was:
In 1793 Philadelphia, 16-year-old Matilda Cook, separated from her sick mother, learns about perseverance and self-reliance when she is forced to cope with the horrors of a yellow fever epidemic. The...