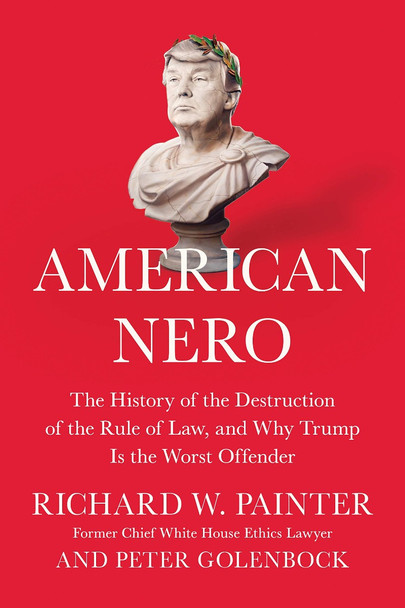 MSRP:
Now: List Price $26.95
Was:
— You save
Hardcover
This product qualifies for FREE US Ground Shipping on orders over $100.

Donald Trump is eroding the rule of law!

We’ve heard it said many times, and we can feel it in our guts. But what does “rule of law” really mean? And what happens when it breaks down?

From Richard Painter, a senate candidate and law professor who served as White House chief ethics counsel under President George W. Bush, and New York Times bestselling author Peter Golenbock, American Nero is an in-depth exploration the rule of law—the legal bedrock on which this country was founded.

Painter and Golenbock present a clear description of rule of law—arguably the single most important principle underlying our civilization. They also describe the abuses of power that have occurred throughout our nation’s history. Beginning in Puritan New England with the infamous Salem Witch Trials, American Nero makes vivid stops at The Red Scare of the 1920s, Japanese-American internment, the McCarthy Era, and, much more recently, President Trump’s attempt to violate the First Amendment by banning Muslims from entering the US.

While Trump is not the first offender, he is arguably the most blatant, and this unflinchingly honest and insightful work presents in devastating detail the ways in which our current president has trampled the rule of law with his attacks on the freedom of the press, the independence of the judiciary, and the autonomy of the justice department.

This is not a book about right vs. left —instead, it is about the rule of law, a principle that transcends partisan politics, and how vital it is to the survival of our country. This book serves as a call-to-action, looking ahead to a brighter future for our country, one where citizens and officials alike protect our rights and honor their responsibilities.

Timely and revealing, American Nero shares the lessons of history and lays the framework for returning to a society that respects the rule of law—an America that is consistent with our Founding Fathers’ vision of a genuinely free nation.

The book, American Nero: The History of the Destruction of the Rule of Law, and Why Trump Is the Worst Offender [Bulk, Wholesale, Quantity] ISBN# 9781948836012 in Hardcover by Richard Painter;Peter Golenbock may be ordered in bulk quantities. Minimum starts at 25 copies. Availability based on publisher status and quantity being ordered.
View AllClose

Deep State: Trump, the Fbi, and the Rule of Law

MSRP:
Now:
As low as
Was:
From bestselling author James Stewart, the definitive story of the war between President Trump and America's principal law enforcement agencies, answering the questions that the Mueller report...

The Rules of Contagion: Why Things Spread--And Why They Stop

MSRP:
Now:
As low as
Was:
From ideas and infections to financial crises and fake news, an "utterly timely" look at why the science of outbreaks is the science of modern life These days, whenever anything spreads, whether...

MSRP:
Now:
As low as
Was:
Is the 45th President of the United States under the control of a foreign power? Award-winning Associated Press reporter Seth Hettena untangles the story of Donald Trump’s long involvement with...

MSRP:
Now:
As low as
Was:
“In Dark Towers, David Enrich tells the story of how one of the world’s mightiest banks careened off the rails, threatening everything from our financial system to our democracy through its reckless...

Dying to Cross: The Worst Immigrant Tragedy in American History

MSRP:
Now:
As low as
Was:
On May 14, 2003, a familiar risk-filled journey, taken by hopeful Mexican immigrants attempting to illegally cross into the United States, took a tragic turn. Inside a sweltering truck abandoned in...

MSRP:
Now:
As low as
Was:
Bestselling author, vegan goddess, and comfort food queen Isa Chandra Moskowitz is back with her biggest book ever--to prove that making festive vegan food for any occasion can be easy, delicious,...

MSRP:
Now:
As low as
Was:
• Classed as one of the world’s most influential novels of non-sensical rhymes • Originally published in November 1865, Alice's Adventures in Wonderland has inspired children and adults alike in the...

MSRP:
Now:
As low as
Was:
Here's a fresh new Little Golden Book edition of the classic children's singalong song, brought to life by a popular illustrator! The book, Old MacDonald Had a Farm (Little Golden Book) [Bulk,...

MSRP:
Now:
As low as
Was:
The world's greatest problem-solvers, forecasters, and decision-makers all rely on a set of frameworks and shortcuts that help them cut through complexity and separate good ideas from bad ones...

MSRP:
Now:
As low as
Was:
In hardcover for the first time, this tenth-anniversary edition of the game-changing #1 New York Times bestseller features a new foreword and brand-new tools to make the work your own. For over a...

Darkness to Light: A Memoir