And How Are the Children?: Timeless Lessons from the Frontlines of Motherhood [Hardcover] 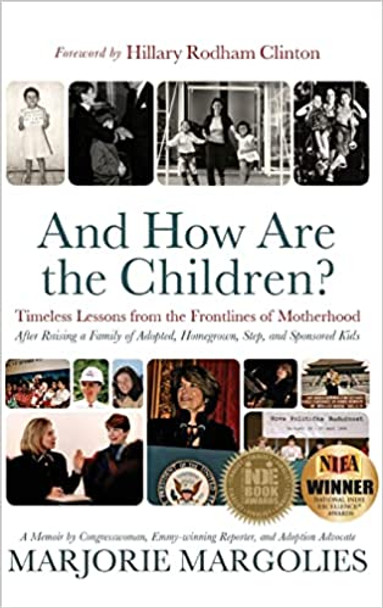 And How Are the Children?: Timeless Lessons from the Frontlines of Motherhood [Hardcover]

Today, the world talks a lot about female empowerment, but when Marjorie was breaking through professional glass ceilings, she was unknowingly paving the way for the generations that followed in several different industries.

After more than 25 years with NBC, she ran for U.S. Congress in 1991-as a registered Democrat in a historically Republican district of suburban Philadelphia-and she shocked the state and the country by winning by just over 1000 votes. She was the first woman elected in her own right in the state of Pennsylvania, but during her short tenure, Marjorie became the main target of Republicans taunts after she cast the deciding vote to approve President Clinton's budget.

And How Are the Children?explores the life of a woman who was hardwired to shift paradigms and break down historic boundaries while managing a busy household and later dealing with heartbreaking tragedies including divorce and the death of a child. Her intention is for women of every generation to recognize themselves in her story and learn how to nurture themselves and the life decisions they have made

The book, And How Are the Children?: Timeless Lessons from the Frontlines of Motherhood [Hardcover] [Bulk, Wholesale, Quantity] ISBN# 9781954332355 in Hardcover by Marjorie Margolies; Hillary Rodham Clinton may be ordered in bulk quantities. Minimum starts at 25 copies. Availability based on publisher status and quantity being ordered.
View AllClose

The Leadership Lessons of Jesus: A Timeless Model for Today's Leaders

MSRP:
Now:
As low as
Was:
This newly redesigned edition of The Leadership Lessons of Jesus is expanding to include more than seventy unique easy-length readings that explore and adapt the individual techniques that made...

How I Did It: Lessons from the Front Lines of Business

MSRP:
Now:
As low as
Was:
Powerful stories from the world’s top CEOs to help prepare you for the hard decisions ahead. The essays in How I Did It teach and inspire. Pulled directly from the pages of one of the most popular...

Bow Down: Lessons from Dominatrixes on How to Get Everything You Want

MSRP:
Now:
As low as
Was:
*One of Glamour’s Best Books of 2020* Popular podcast host and personal finance expert Lindsay Goldwert explores what professional dominatrixes can teach us about confidence, power, and happiness. ...

The Psychology of Money: Timeless Lessons on Wealth, Greed, and Happiness

MSRP:
Now:
As low as
Was:
Doing well with money isn’t necessarily about what you know. It’s about how you behave. And behavior is hard to teach, even to really smart people. Money―investing, personal finance, and business...

How to Tell Stories to Children (Hardcover)

MSRP:
Now:
As low as
Was:
Storytelling is one of the oldest and most essential skills known to humankind, a timeless parenting tool that helps families celebrate life's joys, navigate its challenges, and raise healthy,...

MSRP:
Now:
As low as
Was:
It's 1942: Tomi Itano, 12, is a second-generation Japanese American who lives in California with her family on their strawberry farm. Although her parents came from Japan and her grandparents still...

David Smith: The Art and Life of a Transformational Sculptor

MSRP:
Now:
As low as
Was:
The artist David Smith once wrote, “'Humanism' is a useless word in my time.” A member of the abstract expressionist generation, he would do more than any sculptor of his era to bring the plastic...

Design the Long Life You Love: A Step-By-Step Guide to Love, Purpose, Well-Being, and Friendship

MSRP:
Now:
As low as
Was:
What does it mean to craft the life you want, as you grow older? For industrial designer and author Ayse Birsel, the answer draws on key principles of design—like optimism, empathy, collaboration,...

MSRP:
Now:
As low as
Was:
An adored only child, Annie has until recently lived an idyllic life. She is inseparable from her beautiful mother, a powerful presence, who is the very center of the little girl's existence. Loved...

Creating Superfans: How to Turn Your Customers Into Lifelong Advocates

MSRP:
Now:
As low as
Was:
What if your customers loved your brand the way Swifties love Taylor or Drake loves the Raptors? In Creating Superfans, entrepreneur, keynote speaker, and fan-engagement guru Brittany Hodak shares...

MSRP:
Now:
As low as
Was:
Marlon Peterson grew up in 1980s Crown Heights, raised by Trinidadian immigrants. Amid the routine violence that shaped his neighborhood, Marlon became a high-achieving and devout child, the specter...

Advancing Into Analytics: From Excel to Python and R

MSRP:
Now:
As low as
Was:
Data analytics may seem daunting, but if you're an experienced Excel user, you have a unique head start. With this hands-on guide, intermediate Excel users will gain a solid understanding of...

A Tale of Two Beasts

MSRP:
Now:
As low as
Was:
​AWARD WINNER! In A Tale of Two Beasts, a little girl finds a strange beast in the woods and takes it home as a pet. She feeds it. She shows it off to her friends. She gives it a hat. But that night,...

MSRP:
Now:
As low as
Was:
Can playing dead bring you back to life? Maybe only on Dead Wednesday… On this day the worlds of a shy boy and a gone girl collide, and the connection they make will change them both forever. A...