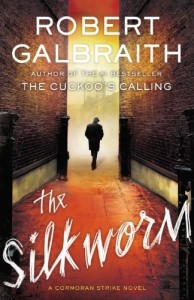 NY Times Bestselling author J. K. Rowling, otherwise known as Robert Galbraith, is back with her newest novel, The Silkworm. Published by an imprint of a division of Hachette, Rowling's newest release is currently caught in the crosshairs of the feud between Amazon and Hachette. Despite the potential loss in sales due to Amazon shipping delays and reduced discounts, we have little doubt that the book will be a #1 bestseller in no time.

Protagonist Cormoran Strike, first introduced in Rowling's last novel The Cuckoo's Calling, returns to investigate the disappearance of novelist Owen Quine, as per the request of Mrs. Quine. As the investigation unfolds, Strike discovers there is more to the case than Quine's wife realizes. Shortly before he went missing, the novelist had just completed a manuscript revealing dangerous secrets about people in his life. It therefore doesn't come as a surprise to Strike when Quine is found brutally murdered. Can Strike uncover the mystery in time? Prepare to be consumed with this addicting and enthralling tale.

Buy The Silkworm in bulk at Book-pal.com, perfect for a Community Read Program or a book club.