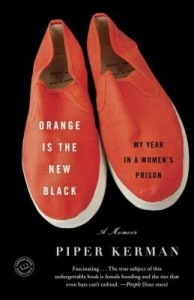 How does a seemingly innocent, white-collar criminal survive a year in a women’s prison? Just ask Piper Kerman, author of Orange is the New Black.

In 1993, a year after graduating from Smith College, a young Piper Kerman met her girlfriend Nora Jansen, an international drug dealer. They traveled the world together for two years while Nora conducted her business. In a state of desperation, Nora once convinced Piper to transport a suitcase full of drug money, an act which would later come back to haunt her several years later. Shortly after their relationship ended, Piper met Larry, her future husband and the love of her life. In 2004, Piper Kerman served 13 months of a 15-month sentence in federal prison for a crime she had committed 10 years before. Her friends and family, and most importantly Larry stuck by her throughout the entire journey.

Piper’s memoir is so unique that Netflix created an original series loosely based on the book. The series became available for online streaming on June 27th, 2013. After watching the entire season, I was intrigued. I immediately ordered the book and finished it within a few days.

Piper writes very candidly about her experience in prison. It was a relief to learn Piper was greeted by kindness and generosity, compared to the violence and hostility she encounters in the series pilot. Piper herself was much more caring and selfless than her TV character, played by actress Taylor Schilling.  The reader witnesses Piper’s maturity as she comes to terms with her situation and accepts responsibility for her actions.

Thanks to the popularity of the Netflix series, Orange is the New Black is currently #4 on the New York Times Bestseller’s list for Combined Print & E-Book Nonfiction. According to Schilling, Season 2 will dig even deeper into the character personas. Keep an eye out for the new season coming in 2014.