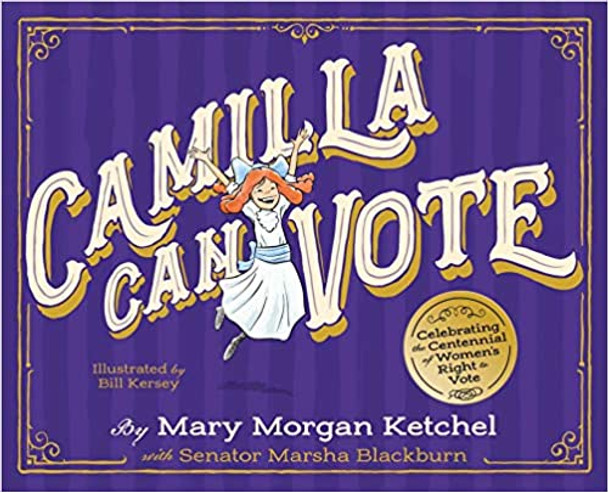 The first woman elected as U.S. Senator from her state pens a lovely children’s book with her daughter about the Suffrage movement to celebrate the centennial of the ratification of the 19th Amendment.

Mary Morgan Blackburn Ketchel has penned a historical fiction book for children bringing to life the excitement of the day women won the right to vote! She is joined by her mother, US Senator Marsha Blackburn, in writing Camilla Can Vote, an intriguing story of the suffrage movement through the eyes of a precocious child.

Camilla’s class trip to the history museum proved to be both instructive and enlightening when Camilla is transported back to August 18, 1920. That’s when women achieved the right to vote with the “Yes” vote from Harry T. Burn, a young legislator from East Tennessee whose mother encouraged him to do the right thing by breaking the 48-48 tie in the Tennessee House of Representatives. Until that day, women did not have the same rights as men.

“…be a good boy and help Mrs. Catt put the ‘rat’ in ratification.”

Legislator Harry T. Burn received a letter from his mother that changed the course of history.

The state of Tennessee became the last of the necessary 36 states to ratify the 19th Amendment, giving women the right to vote. It was a seventy-two-year effort led by some amazing American women, and a story that should be celebrated by every American woman. Join Camilla as she explores this exciting history!

The book, Camilla Can Vote: Celebrating the Centennial of Women's Right to Vote [Bulk, Wholesale, Quantity] ISBN# 9781948677547 in Hardcover by Mary Morgan Ketchel; Marsha Blackburn may be ordered in bulk quantities. Minimum starts at 25 copies. Availability based on publisher status and quantity being ordered.
View AllClose

One Vote, Two Votes, I Vote, You Vote

MSRP:
Now:
As low as
Was:
The Cat in the Hat looks at how we vote, why we vote, and who we vote for! In simple rhyme, the Cat in the Hat introduces early readers to the concept and practice of voting—with a focus on the...

Alice Paul and the Fight for Women's Rights: From the Vote to the Equal Rights Amendment

MSRP:
Now:
As low as
Was:
Here is the story of extraordinary leader Alice Paul, from the woman suffrage movement—the long struggle for votes for women—to the “second wave,” when women demanded full equality with men. Paul...

MSRP:
Now:
As low as
Was:
Myths! Lies! Secrets! Smash the stories behind famous moments in history and expose the hidden truth. Perfect for fans of I Survived and Nathan Hale's Hazardous Tales. In 1920, Susan B. Anthony...

MSRP:
Now:
As low as
Was:
Honoring the 100th anniversary of the 19th amendment to the Constitution, this exciting history explores the full scope of the movement to win the vote for women through portraits of its bold leaders...

MSRP:
Now:
As low as
Was:
“It's hard to imagine a more accessible introduction to voting” than Eileen Christelow's hilariously illustrated Vote!, now updated for the 2018 midterm elections. (Booklist, starred review) * “It's...

MSRP:
Now:
As low as
Was:
The acclaimed author of Where the Watermelons Grow is back with a story perfect for fans of Lynda Mullaly Hunt and Ali Benjamin, about finding friendship after a tragic loss. It’s been eighty-three...

MSRP:
Now:
As low as
Was:
Dr. David Perlmutter, #1 New York Times bestselling author of Grain Brain, and Dr. Austin Perlmutter, his son, explore how modern culture threatens to rewire our brains and damage our health,...

Not Your All-American Girl

MSRP:
Now:
As low as
Was:
A multicultural story full of heart and hilarity about what it means to be all-American. Lauren and her best friend, Tara, have always done absolutely everything together. So when they don't have...

MSRP:
Now:
As low as
Was:
The first time Melanie Ross meets April Hall, she's not sure they have anything in common. One look at April's upswept hair, false eyelashes, and ragged fox-fur collar is enough to convince Melanie...

Deep Delta Justice: A Black Teen, His Lawyer, and Their Groundbreaking Battle for Civil Rights in the South

MSRP:
Now:
As low as
Was:
The unforgettable story of one lawyer and his defendant who together changed American law during the height of the Civil Rights era. In 1966 in a small town in Louisiana, a 19-year-old black man...

The Advantage: Why Organizational Health Trumps Everything Else In Business

MSRP:
Now:
As low as
Was:
There is a competitive advantage out there, arguably more powerful than any other. Is it superior strategy? Faster innovation? Smarter employees? No, New York Times best-selling author, Patrick...

MSRP:
Now:
As low as
Was:
**A 2020 OWL AWARD SHORTLIST WINNER IN THE SALES & MARKETING CATEGORY**And, just like that, everything changed. A global pandemic. Panic. Social distancing. Working from home. Suddenly, virtual...

MSRP:
Now:
As low as
Was:
A Spanish language edition of the popular book 'There was an Old Lady who swallowed a fly'. Forty years after its first publication this much-loved Child's Play classic is as popular as ever...

Culture Wins: The Roadmap to an Irresistible Workplace

MSRP:
Now:
As low as
Was:
The roadmap to making your company a great place to work in today’s job-hopping culture starts right here. What could your company accomplish if it could attract and retain employees who buy into...