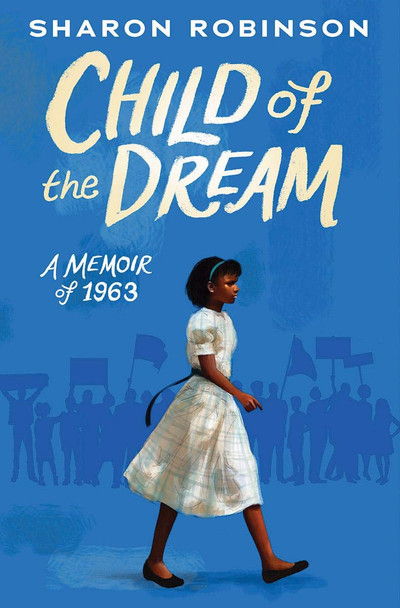 **A 2019 OWL AWARD SHORTLIST WINNER IN THE ELEMENTARY CATEGORY**

An incredible memoir from Sharon Robinson about one of the most important years of the civil rights movement.

In January 1963, Sharon Robinson turns thirteen the night before George Wallace declares on national television "segregation now, segregation tomorrow, segregation forever" in his inauguration speech as governor of Alabama. It is the beginning of a year that will change the course of American history.

As the daughter of baseball legend Jackie Robinson, Sharon has opportunities that most people would never dream of experiencing. Her family hosts multiple fund-raisers at their home in Connecticut for the work that Dr. Martin Luther King Jr. is doing. Sharon sees her first concert after going backstage at the Apollo Theater. And her whole family attends the March on Washington for Jobs and Freedom.

But things don't always feel easy for Sharon. She is one of the only Black children in her wealthy Connecticut neighborhood. Her older brother, Jackie Robinson Jr., is having a hard time trying to live up to his father's famous name, causing some rifts in the family. And Sharon feels isolated-struggling to find her role in the civil rights movement that is taking place across the country.

This is the story of how one girl finds her voice in the fight for justice and equality.

The book, Child of the Dream (a Memoir of 1963) [Bulk, Wholesale, Quantity] ISBN# 9781338282801 in Hardcover by Sharon Robertson may be ordered in bulk quantities. Minimum starts at 25 copies. Availability based on publisher status and quantity being ordered.

I Was Their American Dream: A Graphic Memoir

MSRP:
Now:
As low as
Was:
I Was Their American Dream is at once a coming-of-age story and a reminder of the thousands of immigrants who come to America in search for a better life for themselves and their children. The...

How Dare the Sun Rise: Memoirs of a War Child

MSRP:
Now:
As low as
Was:
This profoundly moving memoir is the remarkable and inspiring true story of Sandra Uwiringiyimana, a girl from the Democratic Republic of the Congo who tells the tale of how she survived a massacre,...

In the Dream House: A Memoir

MSRP:
Now:
As low as
Was:
A revolutionary memoir about domestic abuse by the award-winning author of Her Body and Other Parties In the Dream House is Carmen Maria Machado’s engrossing and wildly innovative account of a...

Here We Are: American Dreams, American Nightmares (a Memoir)

No Walls and the Recurring Dream: A Memoir

MSRP:
Now:
As low as
Was:
A memoir by the celebrated singer-songwriter and social activist Ani DiFranco In her new memoir, No Walls and the Recurring Dream, Ani DiFranco recounts her early life from a place of hard-won...

MSRP:
Now:
As low as
Was:
The #1 bestselling Magic Tree House series is ready to whisk you away through time with Jack and Annie--this time to the Yosemite National Park! The magic tree house whisks Jack and Annie to the...

It's Trevor Noah: Born a Crime: Stories from a South African Childhood (Adapted for Young Readers)

MSRP:
Now:
As low as
Was:
**A 2019 OWL AWARD LONGLIST WINNER IN THE MIDDLE SCHOOL CATEGORY**The host of The Daily Show, Trevor Noah, tells the story of growing up half black, half white in South Africa under and after...

MSRP:
Now:
As low as
Was:
Archie wants to enter his cat in the neighborhood pet show--but the cat has vanished! Though all the kids look for him, he's nowhere to be found. But Archie keeps looking. However, the pet he finally...

A Wild and Precious Life: A Memoir [Hardcover]

MSRP:
Now:
As low as
Was:
A lively, intimate memoir from an icon of the gay rights movement, describing gay life in 1950s and 60s New York City and her longtime activism which opened the door for marriage equality. Edie...

MSRP:
Now:
As low as
Was:
Will Hobbs’s classic tale of whitewater adventure is back in print with an exciting new look. No adults, no permit, no river map. After fifteen-year-old Jessie gets sent to Discovery Unlimited, an...

The Paper Boat: A Refugee Story

MSRP:
Now:
As low as
Was:
Named a best picture book of 2020 by Kirkus, School Library Journal, Booklist, New York Public Library, the Globe and Mail, CBC, and the Bulletin of the Center for Children’s Books ― a heartfelt and...