Tainos and Caribs: The Aboriginal Cultures of the Antilles 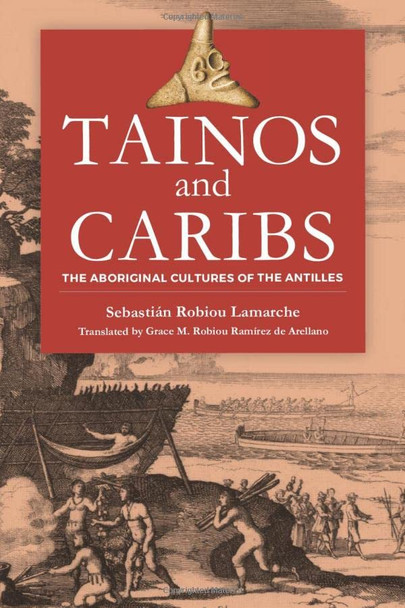 Tainos and Caribs: The Aboriginal Cultures of the Antilles

This book was published originally in Spanish under the title Taínos y caribes, las culturas aborígenes antillanas. Since its publication in 2003, it has been recognized as having contributed to a better understanding among the general public of the history of the Antillean cultures before, during and after the arrival of the Europeans.Over the years, I have received a considerable number of requests from people around the world expressing their desire that the book be made available in English. Tainos and Caribs: The Aboriginal Cultures of the Antilles was inspired by those demands. I hope that the English edition broadens the reach of knowledge from anthropologists, historians, archeologists, linguists, artists and others about the Tainos and the Caribs, two cultures that have captivated my interest and imagination for over 25 years.

The book, Tainos and Caribs: The Aboriginal Cultures of the Antilles [Bulk, Wholesale, Quantity] ISBN# 9781796741322 in Paperback by Sebastian Robiou Lamarche, Sebastián Robiou Lamarche may be ordered in bulk quantities. Minimum starts at 25 copies. Availability based on publisher status and quantity being ordered.
View AllClose

USA - Culture Smart!: The Essential Guide to Customs and Culture

MSRP:
Now:
As low as
Was:
Culture Smart! Japan will guide you through modern Japan’s shifting social and cultural maze. It provides invaluable insights into people’s attitudes and behavior, and practical tips to help make...

Clearing the Plains: Disease, Politics of Starvation, and the Loss of Aboriginal Life

MSRP:
Now:
As low as
Was:
Clearing the Plains is a tour de force that dismantles and destroys the view that Canada has a special claim to humanity in its treatment of indigenous peoples. Daschuk shows how infectious disease...

MSRP:
Now:
As low as
Was:
The book, Tales of the Taíno Gods/Cuentos de los dioses taínos [Bulk, Wholesale, Quantity] ISBN# 9781450091121 in Paperback by Osvaldo García-Goyco may be ordered in bulk quantities. Minimum starts...

MSRP:
Now:
As low as
Was:
The book, Tales of the Taíno Gods/Cuentos de los dioses taínos [Bulk, Wholesale, Quantity] ISBN# 9781450091121 in Paperback by Osvaldo García-Goyco may be ordered in bulk quantities. Minimum starts...

MSRP:
Now:
As low as
Was:
For more than one hundred years H. G. Wells’ classic science fiction tale of the Martian invasion of Earth has enthralled readers with a combination of imagination and incisive commentary on the...

The Fight to Save the Town: Reimagining Discarded America

MSRP:
Now:
As low as
Was:
Decades of cuts to local government amidst rising concentrations of poverty have wreaked havoc on communities left behind by the modern economy. Some of these discarded places are rural. Others are...

MSRP:
Now:
As low as
Was:
Called "The Black Pope" by many of his followers, Anton La Vey began the road to High Priesthood of the Church of Satan when he was only 16 years old and an organ player in a carnival: "On Saturday...

You're about to Make a Terrible Mistake: How Biases Distort Decision-Making and What You Can Do to Fight Them

MSRP:
Now:
As low as
Was:
Discover nine common business decision-making traps -- and learn practical tools for avoiding them -- in this "masterful," research-based guide from a professor of strategic thinking. (Daniel...

MSRP:
Now:
As low as
Was:
The cavemen need help. Their King has forgotten all about them, thanks to the swamp creatures who surround the castle. “They’re slippery!” “—and scaly!” “and SLIMY!" Donald is just a caveman. But...

MSRP:
Now:
As low as
Was:
It wasBIG.It wasBAD.It was...BEDHEAD!No doubt about it, Oliver's having a very bad hair day. His parents and sister try to help. They push, they pull, they spritz and they spray; they goop, they...

MSRP:
Now:
As low as
Was:
Book 1 of the After series—newly revised and expanded, Anna Todd's After fanfiction racked up one billion reads online and captivated readers across the globe. Experience the internet's most...