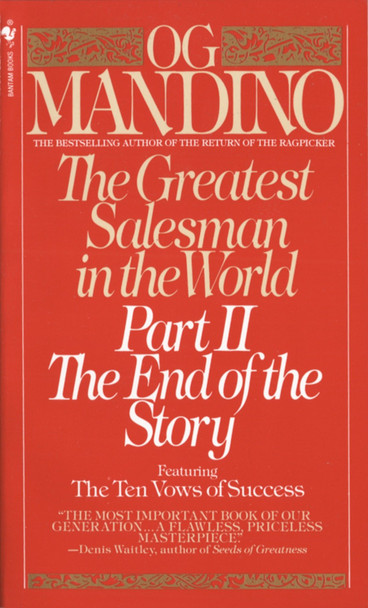 MSRP:
Now: List Price $7.99
Was:
— You save
Mass Market Paperbound
This product qualifies for FREE US Ground Shipping on orders over $100.

“The most important book of our generation . . . A flawless, priceless masterpiece.”—Denis Waitley, author of Seeds of Greatness

You are holding in your hands an almost impossible dream, finally becoming reality . . . the sequel to the inspirational classical that has touched more lives in the past two decades than any other motivational work in the world. More than nine million people continue to find solace and hope in The Greatest Salesman in the World, the gripping tale of a little camel boy, Hafid, who becomes the greatest salesman in the world through following the principles in the ten special scrolls of success.

And now, at las, the world will discover what happens to the greatest salesman when he finally emerges from his lonely retirement to commence a new career. At first he finds failure—until he receives a special gift from someone he has not seen in half a century. He then returns triumphantly to his homeland to write his own Ten Vows of Success to be shared with all who seek a better life—including you.

The Greatest Salesman in the World—Part II: The End of the Story will touch the hearts of those millions who already know Hafid as a beloved friend—and introduce his wisdom to a vast new generation.

The Greatest Secret in the World

MSRP:
Now:
As low as
Was:
Mandino offers an explanation of his famous Ten Greatest Scrolls of SuccessThe book, The Greatest Secret in the World ISBN 9780553280388 in Paperback by Mandino, Og may be ordered in bulk quantities...

Death of a Salesman (Penguin Plays)

MSRP:
Now:
As low as
Was:
The Pulitzer Prize-winning tragedy of a salesman’s deferred American dream Ever since it was first performed in 1949, Death of a Salesman has been recognized as a milestone of the American theater...

Death of a Salesman

The Greatest Miracle in the World [Paperback]

MSRP:
Now:
As low as
Was:
Here is a simple but powerful story that will affect your thoughts and actions long after the final sentence has touched your heart.You will never forget:* The four simple rules that can help you...

MSRP:
Now:
As low as
Was:
Llama Llama learns to swim in this sweet 8x8 based on an episode from the Netflix animated television series. Look out, world--Llama Llama is a TV star! The beloved character, made famous by Anna...

MSRP:
Now:
As low as
Was:
NAACP Image Award nominee for Outstanding Biography/Autobiography In her own words, Cyntoia Brown shares the riveting and redemptive story of how she changed her life for the better while in...

MSRP:
Now:
As low as
Was:
A NEW YORK TIMES NOTABLE BOOK OF 2020 NAMED A BEST BOOK OF THE YEAR BY * THE WASHINGTON POST * THE ECONOMIST * NEW SCIENTIST * PUBLISHERS WEEKLY * THE GUARDIAN From one of the most dynamic rising...

MSRP:
Now:
As low as
Was:
The inspiration for the HBO documentary from Academy Award–winning producer Alex Gibney. The #1 New York Times bestseller based on years of reporting and interviews with more than 250 people from...

The Power of One [Paperback]

MSRP:
Now:
As low as
Was:
Unabashedly uplifting." THE CLEVELAND PLAIN DEALER Set in a world torn apart, where man enslaves his fellow man and freedom remains elusive, THE POWER OF ONE is the moving story of one young man's...

MSRP:
Now:
As low as
Was:
A blue crayon mistakenly labeled as "red" suffers an identity crisis in this picture book by the New York Times–bestselling creator of My Heart Is Like a Zoo and It's an Orange Aardvark! Funny,...