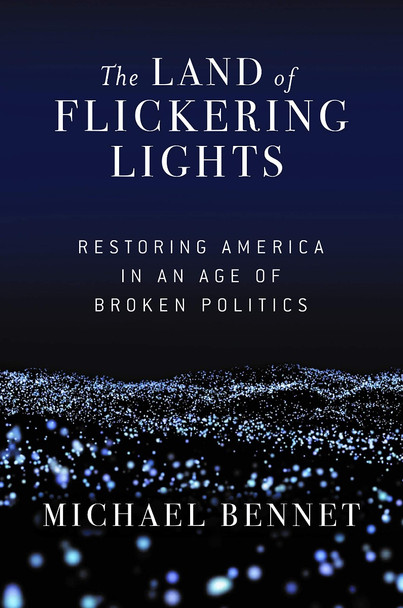 We had become the land of flickering lights, in which the standard of success was not what we were doing for the next generation of Americans, or to enhance our role in the world, but instead whether we had kept government open for another few minutes.”―Michael Bennet

The Land of Flickering Lights is a unique contribution to American political writing at this or any other time. Senator Michael Bennet lifts a veil on the inner workings of Congress to reveal, in his words, “through a series of actual stories―about the people, the politics, the motives, the money, the hypocrisy, the stakes, the outcome―the pathological culture of the capital and the consequences for us all.”

Bennet unfolds the dramatic backstory behind five episodes crucial to the well-being of all Americans. Each of them exemplifies the hyper-partisan politics that have upended our democracy:

The highly politicized confirmation battles over judicial nominations at all levels―epitomized by ugly and unprincipled fights over seats on the Supreme Court;
The passage of the Trump tax law, which massively increased our national debt and widened economic inequality across the country;
The shredding of the Iran nuclear deal, which undermined our national security, caused friends and foes alike to doubt America’s word, and made a mockery of the longstanding bipartisan tradition in foreign policy;
The pervasive corruption unleashed by “dark money” in policies and how big donors have been able to stymie urgent action on climate change and many other issues;
The sabotage by a congressional minority of the “Gang of Eight’s” bi-partisan deal to reform America’s immigration policies, a deal that would have comprehensively addressed the immigration issues that bedevil us to this day.

With frankness and refreshing candor, and in elegant prose, Bennet pulls the machinations behind these episodes into full public view, shedding vital new light on our political dysfunction today. Arguing that each of us has a duty to act as a founder, he will inspire Americans of all political persuasions to demand that the “winners” of our political battles be all the American people, nor one party or the other.

The book, The Land of Flickering Lights: Restoring America in an Age of Broken Politics [Bulk, Wholesale, Quantity] ISBN# 9780802147813 in Hardcover by Michael Bennet may be ordered in bulk quantities. Minimum starts at 25 copies. Availability based on publisher status and quantity being ordered.
View AllClose

Chasing the Moon: The People, the Politics, and the Promise That Launched America Into the Space Age

MSRP:
Now:
As low as
Was:
JFK issued the historic moon landing challenge. These are the stories of the visionaries who helped America complete his vision with the first lunar landing fifty years ago. ...

The Age of Entitlement: America Since the Sixties

MSRP:
Now:
As low as
Was:
A major American intellectual makes the historical case that the reforms of the 1960s, reforms intended to make the nation more just and humane, instead left many Americans feeling alienated,...

Black Presidency: Barack Obama and the Politics of Race in America

MSRP:
Now:
As low as
Was:
Michael Eric Dyson dives deep into the true meaning of Barack Obama’s historic presidency and its effects on the changing landscape of race and blackness in America. How has race shaped Obama’s...

Think for Yourself: Restoring Common Sense in an Age of Experts and Artificial Intelligence

MSRP:
Now:
As low as
Was:
We've outsourced too much of our thinking. How do we get it back? At the height of the 2014 Ebola epidemic, a man who had recently returned from West Africa with a fever and severe abdominal pain...

Rightful Heritage: Franklin D. Roosevelt and the Land of America

MSRP:
Now:
As low as
Was:
The acclaimed, award-winning historian—“America’s new past master” (Chicago Tribune)—examines the environmental legacy of FDR and the New Deal. Douglas Brinkley’s The Wilderness Warrior celebrated...

Tales from the Inner City

MSRP:
Now:
As low as
Was:
Tales from the Inner City is a collection of incredibly original stories, rich with feeling, strangely moving, almost numinous. And when the reader comes to the artwork, it’s like walking into an...

Let It Go: How to Stop Running the Show and Start Walking in Faith

MSRP:
Now:
As low as
Was:
Many women are wired to control. You’re the ones who make sure the house is clean, the meals are prepared, the beds are made, the children are dressed, and everyone gets to work, school, and other...

Slaughterhouse-Five Or The Children's Crusade: A Duty-Dance with Death [Mass Market Paperback]

MSRP:
Now:
As low as
Was:
Slaughterhous-Five is one of the world's great anti-war books. Centering on the infamous fire-bombing of Dresden, Billy Pilgrim's odyssey through time reflects the mythic journey of our own fractured...

MSRP:
Now:
As low as
Was:
When fourteen-year-old Carlotta Walls walked up the stairs of Little Rock Central High School on September 25, 1957, she and eight other black students only wanted to make it to class. But the...

MSRP:
Now:
As low as
Was:
As a young man, Jacob Jankowski was tossed by fate onto a rickety train that was home to the Benzini Brothers Most Spectacular Show on Earth. It was the early part of the great Depression, and for...

Intentional Integrity: How Smart Companies Can Lead an Ethical Revolution--And Why That's Good for All of Us [Hardcover]

MSRP:
Now:
As low as
Was:
"Rob is an insider who's combined doing good with doing business well in two iconic Silicon Valley companies. His book contains smart, practical advice for anyone looking to do good and do well.”...

The Body Book: The Law of Hunger, the Science of Strength, and Other Ways to Love Your Amazing Body [Paperback]

MSRP:
Now:
As low as
Was:
Cameron Diaz shares her formula for becoming happier, healthier, and stronger in this positive, essential guide grounded in science and inspired by personal experience, now a #1 New York Times...

Ego-Tripping and Other Poems for Young People [Paperback]

MSRP:
Now:
As low as
Was:
Insightful and fun, this collection of poetry captures the essence of the African American experience for young people.... The book, Ego-Tripping and Other Poems for Young People [Bulk, Wholesale,...