The War on Normal People: The Truth about America's Disappearing Jobs and Why Universal Basic Income Is Our Future [Hardcover] 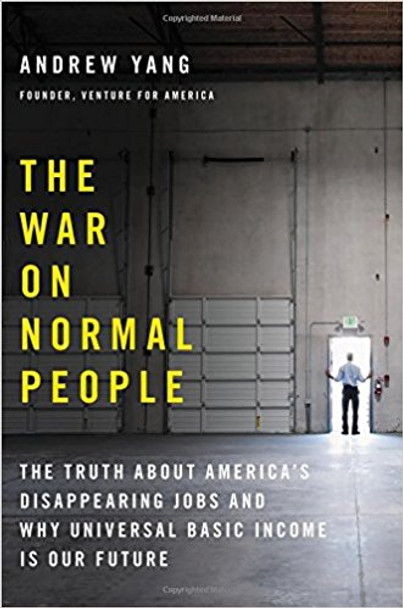 The War on Normal People: The Truth about America's Disappearing Jobs and Why Universal Basic Income Is Our Future [Hardcover]

From entrepreneur Andrew Yang, the founder of Venture for America, an eye-opening look at how new technologies are erasing millions of jobs before our eyes-and a rallying cry for the urgent steps America must take, including Universal Basic Income, to stabilize our economy.

The shift toward automation is about to create a tsunami of unemployment. Not in the distant future--now. One recent estimate predicts 13 million American workers will lose their jobs within the next seven years-jobs that won't be replaced. In a future marked by restlessness and chronic unemployment, what will happen to American society?

In The War on Normal People, Andrew Yang paints a dire portrait of the American economy. Rapidly advancing technologies like artificial intelligence, robotics and automation software are making millions of Americans' livelihoods irrelevant. The consequences of these trends are already being felt across our communities in the form of political unrest, drug use, and other social ills. The future looks dire-but is it unavoidable?

In The War on Normal People, Yang imagines a different future -- one in which having a job is distinct from the capacity to prosper and seek fulfillment. At this vision's core is Universal Basic Income, the concept of providing all citizens with a guaranteed income-and one that is rapidly gaining popularity among forward-thinking politicians and economists. Yang proposes that UBI is an essential step toward a new, more durable kind of economy, one he calls "human capitalism."

The book, The War on Normal People: The Truth about America's Disappearing Jobs and Why Universal Basic Income Is Our Future [Bulk, Wholesale, Quantity] ISBN# 9780316414241 in Hardcover by Andrew Yang may be ordered in bulk quantities. Minimum starts at 25 copies. Availability based on publisher status and quantity being ordered.
View AllClose

Raising the Floor: How a Universal Basic Income Can Renew Our Economy and Rebuild the American Dream

MSRP:
Now:
As low as
Was:
Advances in technology are creating the next economy and enabling us to make things/do things/connect with others in smarter, cheaper, faster, more effective ways. But the price of this progress has...

Gigged: The End of the Job and the Future of Work [Hardcover]

MSRP:
Now:
As low as
Was:
One in three American workers is now a freelancer. This “gig economy”―one that provides neither the guarantee of steady hours nor benefits―emerged out of the digital era and has revolutionized the...

MSRP:
Now:
As low as
Was:
We’ve all heard that the American Dream is vanishing, and that the cause is rising income inequality. The rich are getting richer by rigging the system in their favor, leaving the rest of us to...

MSRP:
Now:
As low as
Was:
NOW A HULU ORIGINAL SERIES • NEW YORK TIMES BESTSELLER • “A stunning novel about the transformative power of relationships” (People) from the author of Conversations with Friends, “a master of the...

MSRP:
Now:
As low as
Was:
“Harvey offers surprising insights into the male mentality and gives women strategies for taming that unruly beast.” —Philadelphia Inquirer “Women should listen to Steve Harvey when it comes to what...

How We Learn: The Surprising Truth about When, Where, and Why It Happens

MSRP:
Now:
As low as
Was:
In the tradition of The Power of Habit and Thinking, Fast and Slow comes a practical, playful, and endlessly fascinating guide to what we really know about learning and memory today—and how we can...

MSRP:
Now:
As low as
Was:
The acclaimed author of Where the Watermelons Grow is back with a story perfect for fans of Lynda Mullaly Hunt and Ali Benjamin, about finding friendship after a tragic loss. It’s been eighty-three...

MSRP:
Now:
As low as
Was:
Dr. David Perlmutter, #1 New York Times bestselling author of Grain Brain, and Dr. Austin Perlmutter, his son, explore how modern culture threatens to rewire our brains and damage our health,...

MSRP:
Now:
As low as
Was:
The first woman elected as U.S. Senator from her state pens a lovely children’s book with her daughter about the Suffrage movement to celebrate the centennial of the ratification of the 19th...

Clive and His Art (All about Clive)

MSRP:
Now:
As low as
Was:
Meet Clive - and his imagination! Clive loves all kinds of art. He likes looking at it, making it and sharing it with his friends. A gentle, affectionate book, celebrating diversity and challenging...