We Are Indivisible: A Blueprint for Democracy After Trump 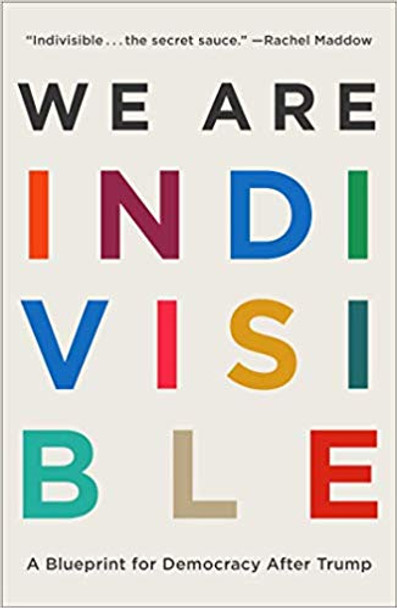 We Are Indivisible: A Blueprint for Democracy After Trump

This is a story of democracy under threat. It’s the story of a movement rising up to respond. And it’s a story of what comes next.

Shortly after Trump’s election, two outraged former congressional staffers wrote and posted a tactical guide to resisting the Trump agenda. This Google Doc entitled “Indivisible” was meant to be read by friends and family. No one could have predicted what happened next. It went viral, sparking the creation of thousands of local Indivisible groups in red, blue, and purple states, mobilizing millions of people and evolving into a defining movement of the Trump Era. From crowding town halls to killing TrumpCare to rallying around candidates to build the Blue Wave, Indivisibles powered the fight against Trump—and pushed the limits of what was politically possible.

In We Are Indivisible: A Blueprint for Democracy After Trump, the (still-married!) co-executive directors of Indivisible tell the story of the movement. They offer a behind-the-scenes look at how change comes to Washington, whether Washington wants it or not. And they explain how we’ll win the coming fight for the future of American democracy. We Are Indivisible isn’t a book of platitudes about hope; it’s a steely-eyed guide to people power—how to find it, how to build it, and how to use it to usher in the post-Trump era.

*All proceeds to the author go to Indivisible's Save Democracy Fund

The book, We Are Indivisible: A Blueprint for Democracy After Trump [Bulk, Wholesale, Quantity] ISBN# 9781982129972 in Hardcover by Leah Greenberg;Ezra Levin may be ordered in bulk quantities. Minimum starts at 25 copies. Availability based on publisher status and quantity being ordered.
View AllClose

Unfree Speech: The Threat to Global Democracy and Why We Must Act, Now

MSRP:
Now: $16.00
Was:
An urgent manifesto for global democracy from Joshua Wong, the 23-year-old phenomenon leading Hong Kong's protests - and Nobel Peace Prize nominee - with an introduction by Ai Weiwei With global...

MSRP:
Now: $7.99
Was:
From America's call for a free press to its embrace of the capitalist system,Democracy in America--first published in 1835--enlightens, entertains, and endures as a brilliant study of our national...

MSRP:
Now: $24.99
Was:
“I am a member of a party of one, and I live in an age of fear.” These words were written by E. B. White in 1947. Decades before our current political turmoil, White crafted eloquent yet practical...

The Apprentice: Trump, Russia and the Subversion of American Democracy

Our Damaged Democracy: We the People Must Act

MSRP:
Now: $17.00
Was:
“A Washington insider draws on decades of experience to deliver a blistering critique of the state of American government” (Kirkus Reviews) in an authoritative scrutiny of the forces that run our...

The Whole Foods Diet: The Lifesaving Plan for Health and Longevity [Paperback]

MSRP:
Now: $16.99
Was:
The definitive guide to the optimum diet for health and wellness, from the founder of Whole Foods Market and the doctors of Forks Over Knives. THE WHOLE FOODS DIET simplifies the huge body of...

MSRP:
Now: $8.99
Was:
The Ninth Legion marched into the mists of Northern Britainand they were never seen again. Thousands of men disappeared and their eagle standard was lost. It's a mystery that's never been solved,...

MSRP:
Now: $29.95
Was:
Canada's relationship with its Indigenous people has suffered as a result of both the residential school system and the lack of understanding of the historical and current impact of those schools...

MSRP:
Now: $6.99
Was:
WHEN 13-YEAR-OLD JOSH finds out he has to stay with his dad in Chicago for a few months, he's not too thrilled. But when he arrives at the airport, he's simply devastated. His fatherwho used to be a...

MSRP:
Now: $16.00
Was:
Comedian and civil rights activist Dick Gregory’s million-copy-plus bestselling memoir—now in trade paperback for the first time. “Powerful and ugly and beautiful...a moving story of a man who...