Who Was Harvey Milk? 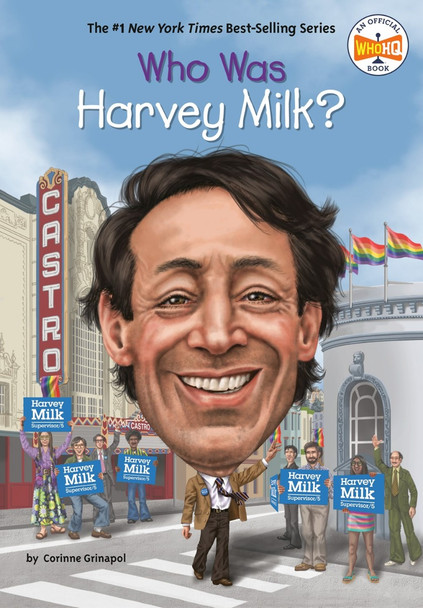 Who Was Harvey Milk?

Learn about one of the most influential leaders in the fight for gay rights.

Although he started out as a teacher without aspirations to be an activist or politician, Harvey Milk found himself captivated by the history-making movements of the 1960s. He would eventually make history of his own by becoming the first openly gay elected politician in California. While in office, Harvey Milk advocated for equal rights for the gay community.

Even though his life and career were cut short, Harvey is still seen by many as one of the most famous and most significantly open LGBT officials ever elected in the United States. His life and legacy continue to inspire and unite the community.

The book, Who Was Harvey Milk? [Bulk, Wholesale, Quantity] ISBN# 9781524792787 in Paperback by Corinne A. Grinapol;Who HQ;Gregory Copeland (Illustrated by) may be ordered in bulk quantities. Minimum starts at 25 copies. Availability based on publisher status and quantity being ordered.
View AllClose

MSRP:
Now: $7.99
Was:
At home in San Francisco, May speaks Japanese and the family eats rice and miso soup and drinks green tea. When she visits her friends' homes, she eats fried chicken and spaghetti.... The book, Tea...

MSRP:
Now: $7.99
Was:
You probably drink milk at almost every meal. But have you ever wondered where it comes from? Cows eat special feed to make good milk. But after the cow is milked, there are still many steps the...

MSRP:
Now: $17.95
Was:
A dog’s world is a world of scents, of adventure. When a runaway West Highland Terrier named Harvey wanders out of his old life guided only by his nose and his heart, lives begin to converge. ...

Pride: The Story of Harvey Milk and the Rainbow Flag

MSRP:
Now: $17.99
Was:
In this deeply moving and empowering true story, young readers will trace the life of the Gay Pride Flag, from its beginnings in 1978 with social activist Harvey Milk and designer Gilbert Baker to...

Finally Free: Fighting for Purity with the Power of Grace

MSRP:
Now: $15.99
Was:
If you have struggled personally against the powerful draw of pornography, or if you have ever tried to help someone fighting this battle, you know how hard it is to break free. But real freedom...

Calm with the Very Hungry Caterpillar ( World of Eric Carle )

MSRP:
Now: $8.99
Was:
This beautiful little gift book featuring The Very Hungry Caterpillar provides a simple, easy-to-follow journey to relaxation, perfect for children and adults. Just stop and breathe . . . How do you...

Race Against Time: A Reporter Reopens the Unsolved Murder Cases of the Civil Rights Era

MSRP:
Now: $28.00
Was:
“For almost two decades, investigative journalist Jerry Mitchell doggedly pursued the Klansmen responsible for some of the most notorious murders of the civil rights movement. This book is his...

Happiness Becomes You: A Guide to Changing Your Life for Good

MSRP:
Now: $26.00
Was:
Tina Turner--beloved living legend--returns with a deeply personal and inspiring book that reveals the wisdom behind her journey to joy and provides a practical guide to finding happiness in your own...

MSRP:
Now: $19.99
Was:
“A landmark in American literature” (Chicago Sun-Times)—Stephen King’s #1 national bestseller about seven adults who return to their hometown to confront a nightmare they had first stumbled on as...

MSRP:
Now: $16.99
Was:
A little girl and her parents have lost their home and must live in a homeless shelter. Even worse, due to a common shelter policy, her dad must live in a men's shelter, separated from her and her...

Itch!: Everything You Didn't Want to Know about What Makes You Scratch

MSRP:
Now: $16.99
Was:
Everybody gets itchy, and every kid will love this title that scratches the itch to know more and about the history, anatomy, botany, biology behind it. Perfect for fans of Grossology books looking...