Winning Now, Winning Later: How Companies Can Win in the Short Term While Investing for the Long Term 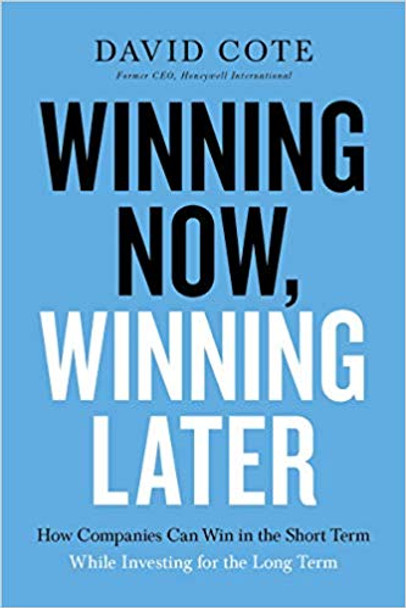 Winning Now, Winning Later: How Companies Can Win in the Short Term While Investing for the Long Term

Business leaders often take actions that prop up earnings in the short term, but compromise their companies’ long-term health. David Cote, the much-respected former leader of Honeywell International and one of the most successful CEOs of his generation, shares a simple, paradigm-shifting method of achieving both short- and long-term goals.

Short-termism is rampant among executives and managers today, causing many companies to underperform and even go out of business. With competition intense and investors demanding strong quarterly gains now, leaders all too often feel obliged to sacrifice the investments so necessary for long-term growth.

Dave Cote is intimately familiar with this problem. Upon becoming Honeywell’s CEO in 2002, he encountered an organization on the verge of failure, thanks to years of untrammeled short-termism. To turn the company around, he and his team adopted a series of bold operational reforms and counterintuitive leadership practices that enabled them to “do two conflicting things at the same time”--pursue strong short- and long-term results. The outcome was phenomenal. Under Cote’s leadership, Honeywell’s market cap grew from $20 billion to $120 billion, delivering returns of about 800%, two and a half times greater than the S&P 500.

Offering ten essential principles for winning both today and tomorrow, this book will help readers to:

Spot practices that seem attractive in the short term but will cost the company in the future
Determine where and how to invest in growth for maximum impact
Sustain both short-term performance and long-term investments even in challenging times, such as during recessions and leadership transitions
Feel inspired to stand up to investors and other managers who are solely focused on either short- or long-term objectives
Step back, think independently, and foster independent thinking among others around them

Presenting a comprehensive solution to a perennial problem, Winning Now, Winning Later is a go-to guide for leaders everywhere who seek to finally transcend short-termism’s daily grind and leave an enduring legacy of success.

The book, Winning Now, Winning Later: How Companies Can Win in the Short Term While Investing for the Long Term [Bulk, Wholesale, Quantity] ISBN# 9781599510217 in Hardcover by David M. Cote may be ordered in bulk quantities. Minimum starts at 25 copies. Availability based on publisher status and quantity being ordered.
View AllClose

Leadership Engine: How Winning Companies Build Leaders at Every Level

MSRP:
Now:
As low as
Was:
In this Wall Street Journal and BusinessWeek bestseller, Michigan Business School guru and worldwide consultant Noel Tichy brings his special brand of organisational transformation to a practical...

Legacy in the Making: Building a Long-Term Brand to Stand Out in a Short-Term World

MSRP:
Now:
As low as
Was:
A book for a different breed of business leader, one who looks beyond the moment to create a life of significance. Most of us are familiar with the traditional way of looking at legacy―something...

MSRP:
Now:
As low as
Was:
Described as America's #1 manager, Jack Welch now lays out the real "stuff" of work in this new title that is destined to become the bible of business for generations to come. "Winning" clearly and...

The Startup Way: How Modern Companies Use Entrepreneurial Management to Transform Culture and Drive Long-Term Growth

MSRP:
Now:
As low as
Was:
From bestselling author of The Lean Startup comes an essential guide that shows how entrepreneurial principles can be used in businesses of all kinds to grow revenue, drive innovation, and transform...

The Long Game: How to Be a Long-Term Thinker in a Short-Term World

MSRP:
Now:
As low as
Was:
A BookPal Staff Pick for September 2021 Your personal goals need a long-term strategy. It's no secret that we're pushed to the limit. Today's professionals feel rushed, overwhelmed, and...

MSRP:
Now:
As low as
Was:
Shakespeare's history play tells the story of England's King Henry V and the Battle of Agincourt during the Hundred Years' War. This revised edition includes a new overview by Sylvan Barnet, an...

MSRP:
Now:
As low as
Was:
Lola was a buckshot-riddled stray, lost on a Memphis highway. Cody was rejected from seven different homes. Ace had been sprayed with mace and left for dead on a train track. They were deemed...

MSRP:
Now:
As low as
Was:
The Belly Art Project is a celebration of one of humanity’s greatest gifts: motherhood! Created by Sara Blakely, the founder of Spanx and the Sara Blakely Foundation, this beautiful, happy book...

MSRP:
Now:
As low as
Was:
What happens when the pastor of a mega church loses his faith? Pastor Chase Falson has lost his faith in God, the Bible, evangelical Christianity, and his super-sized megachurch. When he falls apart,...

MSRP:
Now:
As low as
Was:
AN INSTANT NEW YORK TIMES BESTSELLER “Fierce and unrelenting…Do yourself a favor and get lost in this beautiful book!” ―Tomi Adeyemi, #1 New York Times bestselling author of Children of Blood and...

MSRP:
Now:
As low as
Was:
**2018 OWL AWARD CHILDREN'S LITERATURE CATEGORY WINNER**Llamaphones, Janik Coat’s much-anticipated follow-up to Hippopposites and Rhymoceros, features witty words that sound the same but are...

It Didn't Start with You: How Inherited Family Trauma Shapes Who We Are and How to End the Cycle

MSRP:
Now:
As low as
Was:
A groundbreaking approach to transforming traumatic legacies passed down in families over generations, by an acclaimed expert in the field Depression. Anxiety. Chronic Pain. Phobias. Obsessive...