As a Woman: What I Learned about Power, Sex, and the Patriarchy After I Transitioned 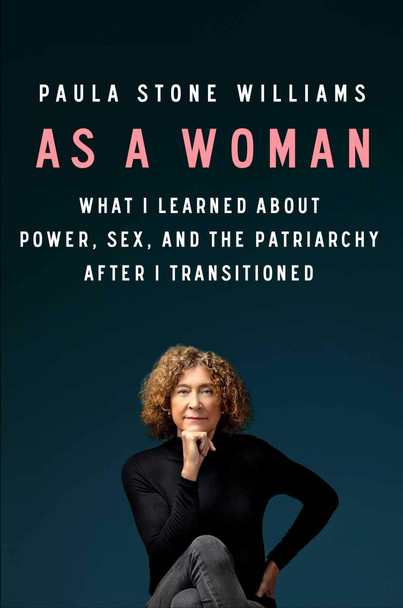 As a Woman: What I Learned about Power, Sex, and the Patriarchy After I Transitioned

A moving and unforgettable memoir of a transgender pastor’s journey from despair to joy as she transitioned from male to female and learned about gender inequity, at home and in the workplace—perfect for fans of Redefining Realness and There Is Room for You.

As a father of three, married to a wonderful woman, and holding several prominent jobs within the Christian community, Dr. Paula Stone Williams made the life-changing decision to physically transition from male to female at the age of sixty. Almost instantly, her power and influence in the evangelical world disappeared and her family had to grapple with intense feelings of loss and confusion.

Feeling utterly alone and at a loss after being expelled from the evangelical churches she had once spearheaded, Paula struggled to create a new safe space for herself where she could reconcile her faith, her identity, and her desire to be a leader. Much to her surprise, the key to her new career as a woman came with a deeper awareness of the inequities she had overlooked before her transition. Where her opinions were once celebrated and amplified, now she found herself sidelined and ignored. New questions emerged. Why are women’s opinions devalued in favor of men’s? Why does love and intimacy feel so different? And, was it possible to find a new spirituality in her own image?

In As a Woman, Paula pulls back the curtain on her transition journey and sheds light on the gendered landscape that impacts many in the LGBTQ+ community. She urges men to recognize the ways in which the world is tilted in their favor and validates the experiences of women who have been disregarded based solely on their gender, while also acknowledging how she was once like those men who are blind to their privilege. With equal parts humility and confidence, Paula shares her lived experience of both genders and offers a truly unique perspective on the universal struggle to understand what it means to be male, female, and simply, human.

The book, As a Woman: What I Learned about Power, Sex, and the Patriarchy After I Transitioned [Bulk, Wholesale, Quantity] ISBN# 9781982153342 in Hardcover by Paula Stone Williams may be ordered in bulk quantities. Minimum starts at 25 copies. Availability based on publisher status and quantity being ordered.
View AllClose

What I Love About You

MSRP:
Now:
As low as
Was:
A sweet and funny "I Love You" picture book about everything a parent loves about his or her child—from acclaimed artist Susan Farrington. Do you know what I love? So many things! When you smile,...

What I Love About Christmas

MSRP:
Now:
As low as
Was:
This irresistible board book—with a pop-up, pull-tabs, flaps to lift, and wheels to turn—captures both the excitement of Christmas and the joys of being with family for the holiday. There’s a festive...

MSRP:
Now:
As low as
Was:
You know all those movies where teenagers have, like, THE TIME OF THEIR LIVES? This vacation is probably not going to be that. The last thing sixteen-year-old Maisie Martin thought she'd be doing...

MSRP:
Now:
As low as
Was:
“Heartwarming, endearing, and sure to leave you swooning, What I Like About You shines with authentic characters you will absolutely fall in love with. This story is as sweet as the cupcakes you’ll...

MSRP:
Now:
As low as
Was:
Star Trek legend and veteran author William Shatner discusses the meaning of life, finding value in work, and living well whatever your age. "I have always felt," William Shatner says early in his...

MSRP:
Now:
As low as
Was:
"A MUST-READ FOR ANYONE INTERESTED IN UNDERSTANDING AND DISMANTLING MASS INCARCERATION." ―Chesa Boudin, District Attorney of San Francisco America's criminal justice system is among the deadliest...

MSRP:
Now:
As low as
Was:
Using a wide variety of stunning photographs, author Kevin Kurtz poses thought-provoking questions to help readers determine if things are living or nonliving. For example, if most (but not all)...

MSRP:
Now:
As low as
Was:
John Adams didn't enjoy traveling. He much preferred to stay home with his wife and children. But John Adams also had a dream: He wanted to see the thirteen colonies free from English rule. He wanted...

MSRP:
Now:
As low as
Was:
Captain Dare, the fearsome pirate captain, invites children of all ages on this exciting, interactive adventure to find a secret treasure. Children repeat the orders of Captain Dare as they wade...

MSRP:
Now:
As low as
Was:
All young children love to play in the waves at the beach. Now here's a Hello, World! board book that teaches them all about oceans and the creatures and plants that live there. Hello, World! is a...

MSRP:
Now:
As low as
Was:
A feisty tale of determination, ingenuity, and friendship, Pip Jones’ U.S. debut is sure to capture the imaginations of aspiring young inventors. Izzy Gizmo’s inventions are marvelous, magnificent . ...